To Canadians of a certain age, the sweet sound of bicycle bells chiming down the street could mean one of two things – there's a knife sharpener in the neighbourhood or, better yet, a Dickie Dee!

Grab some change and shout out the good news. Old-fashioned ice cream delivery is making a comeback. But these fresh spins on frozen dessert – peddled via tricycles, trucks and preordered subscriptions – aren't your average drumsticks and fudgsicles. This is artisanal ice cream churned in small batches from scratch in such funky flavours as gin-and-tonic or spruce-tip-and-elderflower.

"When we're riding the trike, we always get a lot of waves and cheers," Ben Ernst of Vancouver's Earnest Ice Cream says of the vintage-style Worksman tricycle with a front-loaded cooler that he began wheeling to farmers' markets last summer. "We've even had strangers come up and ask us for a hug."

It's no wonder. The first time I tried Earnest's salted caramel ice cream at Vancouver's Harvest Community Foods, it took my breath away. My friend and I each had a spoonful of the rich, creamy treat, savoured its bright, buttery sweetness and stared at each other with wide eyes and jaws agape.

Across North America, mobile ice cream vendors with a wholesome ethos are dipping into that warm, fuzzy nostalgia for cold treats on hot days. In Seattle, Parfait Organic Artisan Ice Cream began selling its handmade scoops from a flower-painted truck four years ago. Village Ice Cream of Calgary has a charming 1933 Pashley vendor tricycle trotted out for festivals that fits 300 pre-portioned cups of its finest huckleberry, chocolate and Phil & Sebastian-coffee ice creams. In Ottawa, Pascale's All Natural Ice Cream has recently rolled out an electric-powered bike that can be plugged in at private events or farmers' markets to keep their peanut butter, salted-caramel and dark-chocolate-sea-salt cones cool.

"Everyone has a connection to ice cream," says Autumn Maxwell of Cold Comfort Ice Cream in Victoria, who offered home delivery when she began making her exotic flavours (cucumber, watermelon and Victoria gin, or lavender and orange blossom) two years ago. "It's the first dessert you try as a kid. It's cold, sweet and shocking and hard to forget."

The home-delivery model eventually became too onerous for Maxwell, who now sells at markets and in eight local stores.

"If it's an emergency – say it's 10 p.m. and everything's closed – I'll deliver to my long-time customers. I love having that interaction. But I eventually started making so much ice cream I didn't have time to spend the whole day driving around any more."

"The people I deliver to are the nicest people in the city," Mateyko says. "I do not get a lot of people who are not happy to see me. And what a luxury, to actually meet everyone who eats my ice cream."

For Earnest Ice Cream, the tricycle was an affordable way to get their small business off the ground. But low-carbon pedal power was also a natural fit with the owners' belief that small is beautiful. Both Ernst and his partner, Erica Bernardi, are avid cyclists. They package their ice cream in reusable mason jars with handwritten labels. The ice cream sandwiches are wrapped in biodegradable paper. They source their fruit and flavourings from local farmers. They are genuinely earnest.

"The way we sell our ice cream is just as important as the ingredients and process we use," Bernardi explains.

Like all the ice cream artisans in this story, Earnest starts with an all-natural base of local milk, cream and eggs. They don't use any stabilizers. The rich mouth feel comes courtesy of high butterfat content and low air content.

Air is essential to making ice cream. You have to whip the hot liquid base with air as it freezes to create a semi-solid state that's not rock hard. But the less air added, the higher the quality. Commercial producers incorporate mechanized air, which increases the yield and dilutes the density.

"You can feel the weight of our ice cream," Bernardi says. "Our pints are heavy."

Then there's the flavouring. Earnest follows the seasons and buys local as much as possible. When sourcing outside the province, take bananas, for instance, they buy fair-trade products from small-scale growers. The strawberries and basil for their new summer flavour come from SOLEfood, a non-profit inner-city farm that trains and employs residents from Vancouver's Downtown Eastside.

"That's what gets us really excited about flavours – when they're closely connected with the local food movement," Ernst says. "It's great when we're at the markets and we can point to a farmer and tell our customers 'That's where we got our raspberries.' Ice cream is such a beautiful blank canvas to express endless creativity and highlight local ingredients."

Ernst and Bernardi will be opening a brick-and-mortar storefront any day now. And they recently purchased a miniature truck so they're able to sell scoops on the go (Vancouver Coastal Health regulations only allows them to sell prepackaged sandwiches from the tricycle). But even in their new café, they hope to foster the same sense of connection with their customers.

"We're going to have a flat flip-top dipping cabinet, not one that's glassed-in," Bernardi explains. "If the ice cream's on display, people will just look at the ice cream. We want the flavours and the stories explained by the staff. Having that face-to-face interaction and seeing their eyes light up is absolutely by far the best part for me."

Cronut burger to be artery-hardening star of the Ex this year
July 26, 2013 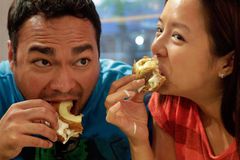 Memories of the Sunday drive and ice cream follies
June 5, 2013 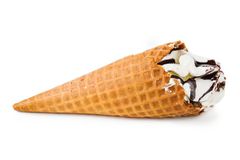 Ice cream addiction? It's possible, says study
March 6, 2012
Brain freeze explained: Why ice cream causes headaches
April 23, 2012
Follow Alexandra Gill on Twitter @lexxgill
Report an error Editorial code of conduct
Due to technical reasons, we have temporarily removed commenting from our articles. We hope to have this fixed soon. Thank you for your patience. If you are looking to give feedback on our new site, please send it along to feedback@globeandmail.com. If you want to write a letter to the editor, please forward to letters@globeandmail.com.
Comments