The Grinch tried and failed to steal Christmas, but grown-ups have done a good job of taking over Halloween. Or perhaps we should say getting it back, after a period when it seemed mainly for kids.

Parental supervision from the sidewalk has drained the mischief from the kids' celebration, while the scope of adult-only revels seems to expand every year. The surge can be seen in Halloween spending – double now what it was in 2005, with adult costumes driving the gain, according to the U.S. National Retail Federation – and in the way that the event itself has absorbed elements of carnival celebrations traditionally held before Lent.

"Halloween used to be just another night to go out," says Zoe Shapiro, marketing manager at Toronto's Drake Hotel, a west-end magnet for the ghoul-night set. "But it has become a cornerstone occasion, like New Year's Eve." Jonathon Gray of Vancouver's Fivesixty club says, "There's definitely a larger number of venues throwing Halloween events."

Carnival would seem to be the polar opposite of Halloween, as devoted to unbridled life as the spookfest is to death. But they share something that Rabelais scholar Mikhail Bakhtin described as the essence of carnival: a suspension of the usual order, including its curbs on pleasure and make-believe. "Do as thou wilt," as Rabelais said in his great carnivalesque novel, Gargantua.

In Catholic countries, carnival was and is the sensual blow-out before the privations of Lent. But as the church's power has waned, the spirit of Lent's counter-festival has wandered, attaching itself to the other big dress-up occasion on the festive calendar. It's as if we have a deep need for what carnival represents, and Halloween, lodged just before the privations of winter, provides a ready-made outlet (Toronto's Caribana, held in high summer, offers another). A huge Halloween street party that flourished in Halifax during the eighties and nineties was actually called Mardi Gras, adopting wholesale the name of a key pre-Lenten occasion.

Like the carnival in Rio, Halloween in many urban centres sprawls over a week or more, absorbing adjacent days and nights for more partying, zombie walks and the office dress-up rituals that many corporate types see as morale-building. Pop culture's recent heavy focus on the undead has helped, but an irreverent, hedonistic impulse also runs strong, and that owes more to carnival than the graveyard.

Bursting from usual restraints can be a destructive experience, or merely represent a safety-valve from the imposed structures of daily life. Halloween as we know it is mainly the latter, though authority is always sensitive to the threat posed by the costumed mob. The non-violent revelry of the Halifax Mardi Gras, which brought 45,000 people into the street, was ultimately broken up and driven indoors by the police.

The English tendency to fuse the event with Guy Fawkes Night (Nov. 5, also known as Bonfire Night) made Halloween bonfires and fireworks a tradition in parts of the former colony of Canada, from Newfoundland to Vancouver. Halloween and fire became menacingly linked in Detroit during the 20-year reign of Devil's Night, when hundreds of abandoned houses were torched the day before Halloween. Those fires, which still happen in significant numbers (slightly less than 100 last year), scrape at the political side of carnival, in that they symbolize discontent with the rot eating at Detroit's core.

In 2011, Halloween followed closely on Occupy Wall Street demonstrations, raising the possibility of some truly political costuming. But by becoming costume, Occupy symbols (placards, slogans on T-shirts) became as harmless as the parodies of political figures and celebrities that Halloween delivers every year. Of all holidays, it is the most voracious for current content, and the least serious. "Anything that has been an Internet meme in the past year is fair game," says the Drake's Shapiro.

Halloween's most conspicuous symptom of rebellion may be its resilient DIY ethos, as seen in countless thrift-store costumes and neighbourhood haunted-house displays. In spite of its status as a commercial event – $8-billion in U.S. sales last year – it has refused to let corporations take over the whole thing. This is our fun and no one else's, people seem to say – a faint, fleeting echo of Rabelais's radical slogan of freedom from all restraint.

Facts & Arguments
Why I’d be picked last for the Zombie Apocalypse
October 30, 2013 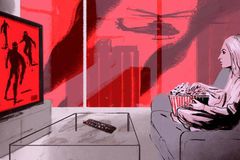 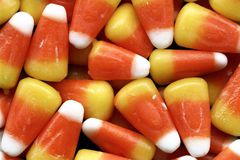 Halloween decorating ideas for your home (and what to avoid)
October 26, 2013 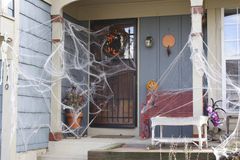