An occasional series on how digital culture affects the way we think, learn and live

The kindergarten student, a shy, Mandarin-speaking five-year-old immigrant in the tiny community of Sangudo, Alta., had barely spoken a word during the first three months of class. So her teacher was surprised one day last year when the girl struck up a conversation. The subject of their animated discussion? An image on the screen of an iPad.

"The iPad just opened up her world," says Sarah Healy, the school district's special education co-ordinator, saying it made her more comfortable communicating with classmates and teachers. In hopes of reaching out to more kids, Northern Gateway Public Schools district in northwest Alberta has purchased 90 iPads for kindergarten students that will be distributed when schools open in September. And, like Northern Gateway, school districts in other regions plan to use tablets in the classroom, encouraged by primarily anecdotal evidence from teachers that they increase student engagement.

The impact of tablets on learning outcomes is still being assessed. Dr. Thierry Karsenti, Canada Research Chair on Information and Communication Technologies in Education, conducted an extensive study on the use of iPads in Quebec schools last year; more than 6,000 students and 300 teachers participated. Karsenti is convinced that the advantages, such as the enormous access to information, outweigh the disadvantages of kids sometimes being distracted by Facebook in class. "It's like giving each kid their own smartboard, instead of only the teacher at the front of the classroom," he said.

Dr. James Slotta, Canada Research Chair in Education and Technology at the Ontario Institute for Studies in Education, agrees. Technology may also increase teachers' ability to take individual learning styles into account. "We have some confidence that learning is happening, so I don't think we're doing any harm," he says of his research into the use of technology in the classroom.

Not every researcher is convinced. Dr. Larry Cuban, professor emeritus of education at Stanford University, says teachers' enthusiasm might well be due to kids being excited about using tech toys in school. Cuban has also studied technology in the classroom, and wonders how long the positive impact will last. "The problem is the novelty effect," he says. "Why spend money on devices that will lose novelty with students over time?"

Tech companies are not waiting for more positive research results before they jump into the potentially huge and lucrative education market. This past spring, EMC Canada donated 184 PlayBook tablets to the Toronto District School Board for use in elementary schools. Intel released two education-specific tablets this month. In the U.S., News Corp. and AT&T are now offering Amplify, an Android-based tablet can be purchased with preloaded curriculum-specific software.

While some companies are designing curriculum content and licensing content from existing textbook publishers, others are developing their own platforms for teachers. Samsung's School Solution equips teachers with Galaxy Note tablets that enable them to monitor what students are doing, broadcast students' work to the class and organize groups for collaboration.

The easy ability to poll students on comprehension helped teachers respond to student needs, says Anthony Ciolfitto, principal at Riverside Secondary in Coquitlam, B.C., which ran a pilot project with high school physics students. "How else can you get feedback from kids on what they are learning? It's hard to be honest when you have to put your hand up in front of the room," Ciolfitto said.

Tablets do not have to be a prohibitively expensive investment for schools. This September, for example, every Grade 6 to Grade 8 student in the St. James-Assiniboia School Division in Winnipeg will receive an iPad. The approximately 1,800 leased tablets will be going home in students' backpacks at a cost of $100 a year per student.

Educators who specialize in tech in the classroom argue that it's crucial to train teachers. The value of the technology can be lost if the teacher is not comfortable with the gadget.

The flip side is that teachers can rely on tablets too much. "Some teachers, they forgot they knew how to teach before the iPad," says the Universite de Montrèal's Karsenti, adding: "Apps are not there to teach for you; they are there to help you."

Parents are caught between enthusiastic teachers and the shortage of reliable research. Brandee Barker, a Vancouver mother whose daughter is going into pre-school this fall, believes children should learn how to use technology from an early age – at home, Barker uses an iPad with learning apps for her daughter. But Barker worries that, in the classroom, the device could become a crutch. "My concern is about the impact on student-teacher interaction," she says. "It could become an easy way out. … [Teachers] … are overworked and their classes are over full, and this could easily become the main method for distributing information."

The key to finding apps that engage while teaching is to ensure they require students to go beyond pointing and clicking to creating. That's what Jen Deyenberg, technology co-ordinator for Northern Gateway, was looking for before she chose apps to recommend to teachers in her school district. In her own search, Deyenberg sought apps that encouraged students to use video, drawing, writing or putting together digital books. "I encourage educators to avoid apps that are just a substitution," she said. "If it is not doing anything different, it's probably just doing it with shiny colours."

With files from Simona Chiose 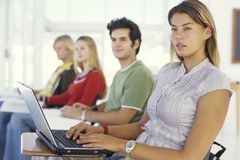 Toddlers with tablets will force a change in education
July 12, 2013 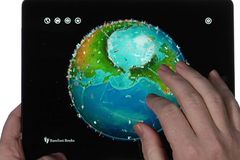