Joel was poking around online, trying to understand how MySpace

worked, when he stumbled upon a photograph he recognized. It was the anonymous egg donor he and his wife had used to conceive their two children three years earlier. Along with her picture was her first name and phone number. Just a few more clicks turned up her full name, her address, her parents' names and where she went to school.

At first the California father was thrilled. Then he felt guilty.

"There's an honour-bound part of me that regrets it, because I did promise not to try to find her," says Joel, who asked that his real name not be used because of donor conception community is small and because he wanted to protect his children. On the other hand, he's glad to have the information to hand, in case his kids ever want it.

"Emily" and her partner also found their donor, though it wasn't accidental. When they found out he had donated through another sperm bank - something he had said he hadn't done - they got nervous and wondered what else he may have lied about. By googling his profession and a physical characteristic, both of which were distinctive, they figured out who he was.

"We found him really fast," says Emily, who lives in Pennsylvania. "Within an hour." Then they found pictures of his parents, brothers and sisters, nieces and nephews.

Finding the identity of an egg or sperm donor who was supposed to be anonymous is becoming increasingly common. With blogs, social networking sites and a sometimes careless abandon about casting personal details into the ether, you hardly need a private investigator to find somebody these days. But once it happens, recipient families face unexpected feelings and choices. Did they do something wrong? What should they say to their kids? Should they make contact? Should they tell the other families that used this donor? What if other families contact the donor and scare him or her off before meeting their own child?

"It's a dilemma," says Wendy Kramer, who founded the Donor Sibling Registry, an online resource that helps match donor-conceived people with siblings and biological parents. "Many are not at all prepared for how they will feel after finding their donor. And it happens all the time. There's no such thing as a 100-per-cent non-traceable donor any more."

"Michael" began searching after one of his eight-year-old twin daughters, conceived with an anonymous egg donor, asked one night out of the blue: "What does my mother look like? I want to know whose hands I inherited."

After the single gay dad, who lives in Texas, showed her the one photo he had, she expressed an interest in meeting her. Michael had written a letter of thanks through the egg donor agency when his girls had been conceived, and had sent appreciative updates at their birth and age 1. But when he called the agency to say he'd like to forward another letter, they admitted they had never passed on his letters, and wouldn't this time either. Michael was stunned.

He resolved to find her independently. And partly because of an error in the donor profile - which had included the woman's full name - it wasn't too difficult. He found her on Facebook and got her mailing address within two days.

But Michael has never sent his carefully crafted letter. When he told his friends what he was doing, they advised him to hold off. "Universally, the women I spoke to said: 'Don't do this,' " he recalls. They reminded him that she was a complete unknown, who could be needy, unstable or unable to have her own kids. "It gave me pause," he says.

That was a year ago. His daughter has not raised the subject since. Michael's gut instinct is that meeting the donor would probably work out okay, but for now, he's doing nothing.

Joel has not contacted his kids' donor either, and it has now been five years. He's waiting for a cue from his children. The only temptation, he says, was to contact her parents for practical advice. "What was [the donor]like as a kid? What worked? What didn't?"

Nor has Emily got in touch with theirs. "We encroached on the privacy of the donor by googling," she says. "We wouldn't presume to bother him in person." Of the several other parents who used this donor, the couple has told only one, who Emily knew she could trust to not go after him.

Unlike Michael, who used a totally anonymous donor, both Joel and Emily used "identity-release" donors, whose names will be released to their children at age 18.

"Joan," a Toronto mom of adolescent twin boys, did make contact. After requesting her medical file from her fertility clinic and discovering her anonymous egg donor's name in it, she wrote dozens of letters to people in the province with her donor's first initial and surname. But the search turned up nothing. It was only after sharing her frustration with a friend, who happened to work at another fertility clinic, that she had a breakthrough. The friend found that a donor by the same name had donated at her clinic too. She contacted the woman on Joan's behalf.

Joan and the donor met in a coffee shop this past January. They talked for more than an hour. "It resolved a lot of issues," Joan says. "I just wanted to experience her." It also alerted Joan to the fact that the donor's biological parents had both been alcoholics. Joan's sons don't know yet that she's met the donor.

Diane Allen, who runs the Infertility Network, based in Toronto, says finding a donor raises many of the same issues that adoption reunion does.

"Both sides have these hopes about how it's all going to work out," she says. "The reality is you are related to somebody you don't know." Trying to mesh these lives together is not easy, she says. "Having said that, I don't know anyone who regrets doing it." 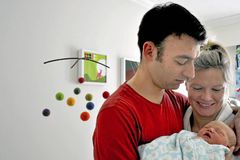