"When I first saw him in the hallways of Father Bressani [high school]in Woodbridge, I knew he was going to be something really big."

She turns to him.

"Wow," he says, shaking his head. "I never knew." He flashes his megawatt smile.

"I just didn't know we had to do it ourselves," she says, laughing from behind a curtain of long, sleek black hair.

This is the David and Nina Rocco show, at home, the husband and wife in a hardwood-floored room with their twin two-year-old daughters, Giorgia and Emma. They're at a key juncture in their long-anticipated route to fame and fortune. This week, their self-produced show, David Rocco's Dolce Vita, which is in its fifth season on Canada's Food Network and in 100 countries around the world, makes its debut on The Cooking Channel, a sister company of The Food Network in the U.S.

It's the final, big meatball of success. Mr. Rocco has just returned from doing a media tour, including interviews with CNN and Fox. "We go into 65 million homes on May 31st," he beams, adding that he is now being represented by the prestigious talent agency, William Morris.

The domestic scene is as casual as an al fresco lunch at a long table in a vineyard. Toys are strewn across the floor. Light falls through the south-facing windows. There is laughter. The couple, both 40, are perfectly coiffed ( at mid-morning, no less) - packaged, seemingly, to portray the right celebrity-esque image - but they're also breezy; free with their banter; relaxed with their children, who clamber up onto their knees for requests; and unfazed by questions about how they turned a clichéd version of Italian life into their successful brand.

In their TV show, Mr. Rocco immerses himself in Italian life, eating al fresco, sampling this and that, kissing his bunched-together fingertips, squeezing plump tomatoes in an outdoor marketplace, leaping on a scooter, chatting with authentic-looking locals, waving from open windows to friends in the street below, making the sign of the cross as he passes an ancient church and throwing together an impromptu meal for anyone who enters his kitchen to smell his pasta sauce.

"But all TV is contrived!" retorts Mr. Rocco playfully when asked if his version of la dolce vita is too predictable. "Who really does a recipe in three minutes?"

"We infuse a modern look into what Italian life is," puts in Ms. Rocco, who also features in the TV series, clad usually in a teensy bikini. The couple, who were both born in Canada, live in Toronto but move to Italy for four or five months every year to shoot a season of the show.

"Yeah, the typical cliché is the old mama and the checkered table cloth," Mr. Rocco explains. "We don't do that. If we're really talking cliché, we might have accordion music."

"We use French [music]" his wife explains sweetly.

"And let's not forget," says Mr. Rocco with a smile, "some clichés are cliché because they're true." The show's popularity comes from the sense of community it evokes, he suggests. "It's the humanity of it. Meeting the cheese maker in the village."

"It's a romanticism, a feel," Ms. Rocco explains, adding that they brought the same sensibility to the cookbook, David Rocco's Dolce Vita. "If people can watch the show and then want to go and break bread with their friends and family, make a meal, that's good."

Their road to success began in high school, when they began dating at the age of 16. Born in Toronto's Scarborough neighbourhood, the son of Italian immigrants who both worked as hairdressers, Mr. Rocco moved to Woodbridge when he was a young teenager. Ms. Rocco's parents, who also immigrated to Canada, were already living in the predominantly Italian community just north of the Greater Toronto Area.

By 16, Mr. Rocco was modelling for big agencies, including Elite and Armstrong Men. He and Ms. Rocco took acting classes together. And when both went off to York University, they ran a restaurant, La Madonnina, in Woodbridge, after Ms. Rocco's father, who worked in real-estate development and construction, bought the building. "There's a sexiness about the restaurant business and we've always loved food, but there's nothing glamorous about it," she says. They gave it up after a year to pursue their acting.

In 1997, without success in the feature film world, they figured a food show would be better. In Italy on holiday, they shot a video on their last day in Florence and later showed it to a Toronto production company. "We shot it on instinct," Mr. Rocco explains. The demo led to a 26-episode TV series called Avventura, which was "a hybrid of travel and cooking."

The following year, they moved to Rome. "Why not? We were young," Mr. Rocco exclaims. They wanted to do a show about the food culture. "Rome confirmed that yes, there's a show here in the Italian lifestyle of connecting to each other through food," he says.

Upon their return to Toronto, they pitched the idea to The Food Network, insisting on producing it themselves. "We knew what the brand was even then." But television executives wanted control and the deal fell through, prompting the couple to withdraw money they had saved to buy a house and go back to Italy to shoot a 30-minute pilot with a crew of ten. "It was a huge leap of faith," Ms. Rocco says.

The Food Network loved it.

"The fact that we were married was the best thing," says Mr. Rocco of their 15-year marriage. "When one of us would get down, the other would be encouraging. I would sometimes be, like, 'I should just go get an ordinary job,' and she'd be, 'No, no, no. Keep the dream.'"

"I always had a belief it was going to happen," she says.

Their Dolce Vita brand is a "lifestyle that's aspirational," they explain. And so is theirs as a couple. They are renting a townhouse while they wait for their house in Toronto's upscale Rosedale neighbourhood to be built - a project that hasn't been without controversy. They bought the property three years ago and have run into objections not just from the city but from snooty neighbours. One actually wondered why the young couple didn't aspire to live in Woodbridge, rather than central WASPdom.

"So we forgot about putting in big lions at the portico," deadpans Ms. Rocco, joking about villa-like architectural style.

"And no arched gateways," adds her husband, beaming his smile.

"Oh no," she says, eyes twinkling at him as she laughs lightly, flips her mane of hair behind her shoulders and leans down to scoop up a child.

Ah, the sweetness of life. If the Roccos can exploit stereotypical Italian life and style for their brand, they're also unafraid to make fun of it. They're successful hybrids themselves, after all - as Canadian or Italian as the setting dictates.

Daddy in the dark: author Ryan Knighton's story of life as a blind father
May 23, 2010 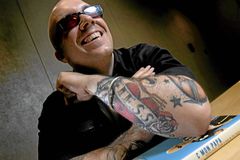 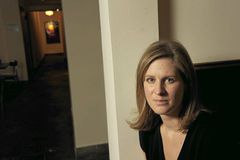