The Biebs is back.

After a few quiet weeks, Canadian pop star Justin Bieber seems to have reverted to his bad-boy ways by storming out of a performance and getting up to late-night hijinks at a Brazilian brothel.

The Telegraph reports that the Canadian pop export recently enraged Brazilian fans by walking off the stage after an audience member threw a water bottle at him during a concert.

As can be seen in the video, the bottle knocked the microphone right out of Bieber's hand. His response was to look briefly in the direction of the thrower and then turn and walk off the stage without saying goodbye or boa noite to his Brazilian fans.

During the same concert, the 19-year-old singer earned loud vocal reproach from the crowd after someone threw a Brazilian flag onto the stage midway through his performance.

The normal response for a visiting pop star is to drape the flag over their shoulders in a sign of respect to locals. Instead, the pride of Stratford, Ont., kicked the flag out of his way.

After Bieber left the show, the teenaged, mostly female fans sat waiting for 30 minutes waiting for him to return. They finally took the hint once the concert crew began packing up the equipment.

Brazilian journalist Felipe Gladiador, who was reviewing the concert for Brazil's G7 website described the moment: "The scene was so shocking that even his dancers couldn't believe what they had seen."

"The fans didn't know what was going on and stayed in their seats half an hour, hoping that he would come back to finish the show.

"The public called for him, sang Baby, and yet nothing. The lights came on, Bieber's team started to take the equipment away and the fans realized it wasn't going to happen. In the end, there was no farewell, no thanks and no rendition of his most famous song."

Bieber's bad behaviour was not a great way to kick off the Brazil leg of his Believe tour.

As reported in the Brazilian media, fans were already ticked that he showed up 20 minutes late to his concert at Anhembi Arena.

Bieber also showed up more than three hours late for a scheduled meet-and-greet with fans, some of whom had paid more than $1,500 to spend a few moments with him.

One alleged tweet from the bottle says, "Stop judging me. I just wanted to touch Justin like the rest of you."

Tweeted another: "I'm getting threats of recycling. Stop it. My intention wasn't to hurt him, just to get to know him."

All told, the Brazilian population doesn't seem too impressed with Bieber, particularly after he was reportedly spotted sneaking out of an infamous brothel in Rio de Janiero.

Photos that appear to show Bieber wrapped in a bedsheet leaving the brothel known as Centauros have made front pages of papers all over Brazil.

Reportedly, Bieber spent more than three hours at the house of ill repute. His attempt at a covert exit didn't work. Everyone recognized his bodyguards.

Did Justin Bieber’s bodyguards really carry him up the Great Wall of China?
October 1, 2013
Proof that Justin Bieber might be all grown up
September 26, 2013 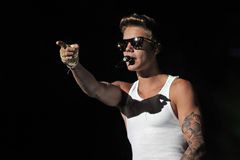 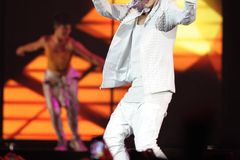 Should Justin Bieber’s mommy be making excuses for his bad-boy behaviour?
July 12, 2013 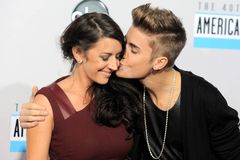 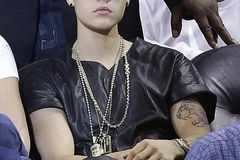 Did Justin Bieber really order his bodyguard to rough up a photog?
June 10, 2013 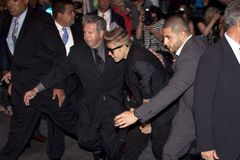 Justin Bieber asks party guests to sign a waiver
May 23, 2013 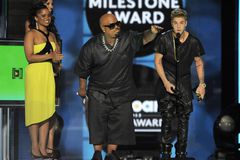 Why Justin Bieber was booed at the Billboard Awards (and probably deserved it)
May 20, 2013 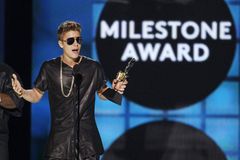