Most political wives who "stand by their man" do so as their husbands publicly apologize for their infidelities, sometimes ahead of an election. Instead, Renata Ford stood by listening to her husband's latest denials, this shortly after he made graphic comments about their marital sex life during a scrum aired on live television Thursday.

With his wife standing several feet away, Toronto Mayor Rob Ford apologized for acting on "impulse," but denied new allegations released in police interviews. The 474-page affidavit outlines former staff members' and a waiter's claims – unproven in court – that on St. Patrick's Day in 2012, the mayor consorted with an escort and snorted cocaine at a pub, accusations Ford denies. The string of new allegations about "cocaine, escorts, prostitution has pushed me over the line, and I used unforgivable language," Ford said as his wife struggled for a place to cast her eyes, with photographers snapping away. "These allegations are 100-per-cent lies. When you attack my integrity as a father and as a husband, I see red," the mayor continued.

Following the brief press conference, reporters and photographers caught up with Ford's wife and her handlers in a parking garage: "I think my husband said already enough," she told them before denying that he should resign.

The spectre of yet another wife standing dutifully by had Twitter erupting in bafflement, concern and dismay. Bloggers and columnists also chimed in with unsolicited advice. In an open letter titled "dear renata ford," blogger Caitlin Gregory summed it up thus: "I have no idea who you are. Today was the first time I had ever seen your face. This was after I knew you engaged in oral sex. That isn't okay with me. You deserve better." In a widely circulated Huffington Post piece, "I Know Why Rob Ford's Wife Stays By His Side," Kristy Woudstra described her personal travails during a 12-year-long marriage with an alcoholic. "Just imagine living with it every day," she ended off.

The mayor's wife is seldom seen and remains a mystery to observers. The Globe's Marcus Gee wrote of the mayor's "bad judgment to bring out his wife to stand by his side just hours after making a comment that must have humiliated her." Some of the mayor's colleagues also expressed discomfort that Renata appeared at city hall Thursday. Councillor John Parker said Ford was using his wife as a "convenient prop." Councillor Janet Davis said the comments were "degrading" to "his own wife."

By Thursday evening, the mayor's unscripted comments about his sex life became the butt of jokes on late-night television, including Stephen Colbert and Jon Stewart, who screened the crudely phrased scrum. (It was met with a roar of screams and laughter from the audience – see the 8:00 mark.)

Scorching scrutiny always follows political wives standing by in high-profile implosions. In 2008, an exhausted-looking Silda Spitzer stood by as her husband, then New York governor Eliot Spitzer, resigned following a highly publicized prostitution scandal. (They are still married.) While Elizabeth Edwards did not physically stand next to husband John Edwards in 2008 when he confessed to an affair with Rielle Hunter, she remained his wife for another two years. Edwards finally filed for divorce when her husband admitted to fathering a child with his mistress, a claim he'd earlier denied.

This past summer, Huma Abedin stood by at a press conference as her husband Anthony Weiner confessed to more sexting-out-of-wedlock. (Here, he also refused to drop out of the New York mayoral race, losing the primary shortly afterward.) In an interview with GQ this fall, Weiner refused to discuss whether he and Abedin would stay together. But he acknowledged that his antics – and his wife's acquiescence – had indelibly damaged her image in the public eye.

Said Weiner: "Her reputation has become the Woman Who Married an Idiot and Stuck with Him." 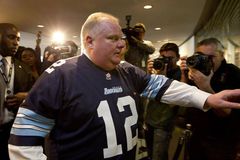 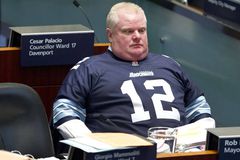 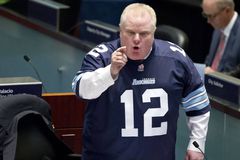 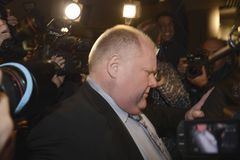