When Kate Middleton emerges from a Rolls-Royce outside Westminster Abbey on her wedding day, she won't just be taking steps toward marriage and life as royalty - she'll be blazing a trail for future bridal wear trends.

"There's no question, it will be a big impact in fashion the way it was with Lady Diana," said luxury bridal and eveningwear designer Ines Di Santo in an interview at her Toronto bridal salon.

"I remember seeing [in]every window they had a copy of the Lady Diana dress. Every city," she added. "I was in Italy, there was a lady dressed up like Lady Diana. If I was in New York, there was a dress of Lady Diana. Canada, of course, I walked by [stores]and saw a lot of them."

"As soon as we have an inkling to what this dress looks like, you're going to see reinterpretations of that at every price point," said Martyn, a wedding and event planner and creative director of Cynthia Martyn Events. "Everything from the Vera Wangs of the world right down to David's Bridal that has just come into Canada with lower-priced bridal gown options, they're going to have their version of it. So there's no doubt."

There may indeed be a wave of copy-Kate creations flooding the market, much like replicas of red-carpet gowns. But Martyn said she thinks it's not necessarily about copying Middleton's dress in its entirety but rather incorporating standout elements, such as the colour or shape, and putting it onto a different silhouette or using a different fabric.

Catherine Lash, founder and creative director of The Wedding Co., which organizes the Wedding Show in Toronto, said the beauty of royal weddings is that they are so steeped in tradition. She believes the forthcoming nuptials between Prince William and Middleton are no exception.

"I don't think you'll be seeing her wearing a very narrow sort of slim dress. I think you're going to see her have a sort of train to it because some of it depends on things like photography," said Lash. "You're going to have a picture from the ceiling of Westminster Abbey. She's got to have something coming down the aisle with her."

"As much as we think it would be great to see her in a really contemporary sort of dress, I think you'll see some tradition in there as well," she added. "And thank goodness we don't have puffy sleeves any more."

The Italian-born Di Santo, whose luxe designs have been worn by celebrities such as tennis star Serena Williams, said she sees similarities in the fashion tastes of the future princess and her fiancé's late mother. She envisions a similarly striking and memorable gown from Middleton in the same vein as the now iconic royal wedding dresses worn by Princess Diana and the late Princess Grace of Monaco.

"I see Kate wearing a very grandiose wedding gown, ball gown, very sophisticated and elegant who will represent who she is," said Di Santo. "I know she is very fashion-forward, she has wonderful taste, she's beautiful, she's very dainty."

Martyn, however, thinks Middleton will opt for a sleeker silhouette and something fitting close to the body.

"I think something that we've always traditionally seen in a lot of bridal gowns no matter what era they're from is beading and a lot of adornment in a subtle way, a little bit of sparkle," she said. "I think we saw that to some degree with Princess Diana, Sarah Ferguson, her dress was quite heavily beaded. So I think that is a way of sort of adorning a gown and giving it that unique touch without it being so over the top."

"I kind of envision her doing something strapless, probably a mermaid style, probably a train. I think getting married in Westminster Abbey you have to have a dress with some drama, so there's going to have to be volume to it, but not in the traditional princess ball-gown-type of expectation."

Sarah Burton, creative director of British fashion house Alexander McQueen, has been among those rumoured to be designing the dress.

Regardless of what she ultimately wears, Martyn said Middleton needs a gown that showcases the transition to her regal role.

"The reality is Kate is not going to want a gown that the rest of us would wear," she said. "We're all going to have gorgeous gowns, but she needs to be that much more special and stand out in a sea of options out there for brides."

"I think obviously depending on which couture designer she's gone to to design the dress, no matter how classic in styling, there's going to be some `wow' element that we're all going to be talking about."

I'll be in London for the royal wedding. Where can I cheer on the happy couple?
March 18, 2011 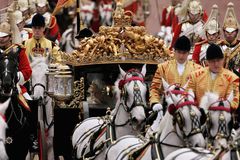