When Princess Charlotte Elizabeth Diana entered the world this past weekend, the fate of her entire life had already been decided. That is, if you believe in the messages of astrologists and numerologists. If the astronomical horoscope traffic on this newspaper's website is to be considered, many Canadians do.

There are apparently, allegedly, supposedly, important messages behind the numbers of Charlotte's birth, the length of her name and the placement of the sun and the moon and the stars on the moment she entered the world. It is written, if you will.

To find out what's really in the cards for the royal newborn, I called people who make a living off of reading stars, moons and numbers and asked them for the scoop.

"When she turns eight years old in 2023, I see her solar arc in her mid-heaven line meeting up with Neptune," says Halifax astrologist Holly Poole, examining the days-old princess's astrological chart. "Whenever that happens, there is going to be a big, life-changing event." And Neptune, allegedly, means it's an event of the "movie star" variety. "She's going to be a musician, a dancer, a performer, an actress – something like that."

But her older brother? Little George's astrology chart suggest he values tradition, says Calgary-based numerologist Vikki MacKinnon and author of Please Take A Number. "Based on his July month and date of birth of the 22nd, which is a higher octave of four," she says, losing me in all the math, "…that means he will be a little stodgy, a leader who doesn't change very much – a little 'that's the way we've always done things'." Not so progressive, George.

His little sister will be more sensitive and more emotional, MacKinnon says, based on her "life path number" of two – which is calculated by adding up the numbers of her birth date, and continuing to add them until they reach a single digit. Two, MacKinnon says, is all about support: "it's my number to signify the wind beneath the wings, constant encouragement."

And the letters of her name, when added up using increasing values for letters of the alphabet, total the number three. MacKinnon says that number means creativity – and, like Poole, sees a future in the creative arts for Charlotte.

But surely anyone could say the future King of England will be a traditional leader, and his sister will be supportive? MacKinnon shuts me down: "Amberly, whether you believe it or not, whether you acknowledge it or not, numbers are always affecting your life. They shape your reality."

Interestingly – though, I suppose that depends if you think all of this is interesting, or royal rubbish – Charlotte and her late grandma have a lot in common: Princess Diana also had Neptune in her "midheaven line," something that neither grandpa Charles, nor great grandma Elizabeth, nor brother George have. It's a sign in the stars that signifies people flock to them because of their flowing charm and grace, Poole says.

Before we hung up, Poole ran my own birth date and instantly gets a few things bang on about my past few years. "You're not wrong," I say, rather caught off guard. "Oh I know, honey. I know I'm not wrong."

Will Charlotte will have a big eighth year and will George be a traditional leader? Only time – and okay, fine, maybe some stars and numbers – will tell.

Think you know your royal baby trivia? Take our quiz
May 2, 2015
As we welcome Princess Charlotte, a look at royal brothers and sisters through the years
Gallery
May 2, 2015 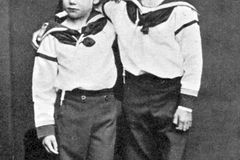