Mothers-to-be who experience a debilitating form of morning sickness brought into the spotlight by Kate Middleton may suffer long-lasting effects, and potential risks for their babies.

"A lot of women who have it very severely won't go on to have more children, and they'll end up with symptoms of post-traumatic stress disorder," said Kimber MacGibbon, a registered nurse and co-founder of the HER Foundation, an organization that provides information and support to women with hyperemesis gravidarum (HG).

Last December, the Duchess of Cambridge was hospitalized to deal with the condition that causes expectant women to feel nausea and vomit, or feel as if they are on the edge of vomiting, almost constantly for extended periods during their pregnancies.

Loss of appetite, malnutrition, dehydration, sensory sensitivity, lowered potassium and sodium levels in the blood, weak muscles and a drop in weight are also among the symptoms. In extreme cases, expectant mothers need to spend time in dark, quiet rooms, removed from activities, because they don't feel they can do anything without being sick.

MacGibbon understands. "I couldn't lay a blanket over my stomach – I couldn't have any pressure, literally any pressure whatsoever," she said of her own experience with the condition.

Babies born to mothers battling the condition have their own obstacles. According to a 2012 study reported in the medical journal Obstetrics & Gynecology, babies born to mothers battling HG may be born prematurely, be small for their gestational age and have significantly lower birth weights. And they may score lower on the apgar test – the first given to newborns to determine how well they tolerated the birthing process.

Little is known about the long-term consequences, but babies born to mothers who suffered nausea beyond the first trimester have been associated with lower task persistence at age five years, and more attention and learning problems at age 12.

Dr. Marla Fejzo is aiming to answer key questions about the cause of HG, including the genetic components of the disease. What is known is that HG affects approximately one in 100 pregnant women; it's a genetic disease; 20 per cent of women who get it have a sister who had it; and 30 per cent have mothers who had it, Fejzo said.

The researcher at UCLA's David Geffen School of Medicine and department of obstetrics and gynecology suffered from severe HG symptoms during her own pregnancies, and due to extreme weight loss during her second pregnancy she lost her baby at just 15 weeks.

Natalie Mitchell, a 27-year-old from Oregon, experienced such severe HG symptoms during her first and second pregnancies that she vowed never to have more children. During her first pregnancy, she experienced symptoms for 20 weeks. During her second they lasted into her third trimester. When she found out she was pregnant for a third time, she said she felt "an indescribable mix of emotion," including despair.

"I had to focus on the life within me, because that's the only positive outcome from HG," she said.

Mitchell lost 25 pounds during each of her three pregnancies, and she said it took an average of 18 months after her first two pregnancies to feel physically and emotionally normal. Her youngest child – a girl – was born in December.

"I'm very physically worn out," she said. "I daydream about going to a hotel and sleeping for 12 hours straight."

After her last child was born, Mitchell had a postpartum tubal ligation, because she can't fathom having another child. Mitchell now mentors and counsels other women with HG through the HER Foundation.

Though it's unlikely Kate will have to deal with exactly the same pressure and challenges she did, Mitchell said she's happy the Duchess's experience has brought attention to the issue.

"If people could just try to understand what it's like, then maybe they would … encourage you to just focus on bringing your baby into the world. That's an incredible marathon," Mitchell said, "and you should be recognized for that."

Mothers who suffered from hyperemesis gravidarum (HG) during pregnancy may experience many postnatal consequences. Half of them will spend more than a month in recovery after giving birth. Other possible impacts:

50 per cent – Could have chronic fatigue

30 per cent – May have food aversion

25 per cent – May suffer from anxiety 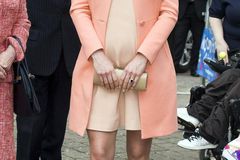 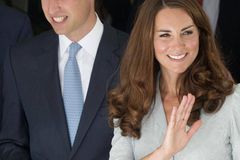