Prince William and Kate are being urged by an animal advocacy group to cancel a planned visit to the Calgary Stampede.

People for the Ethical Treatment of Animals has been a long-standing critic of the Stampede's rodeo events saying animals are injured and killed all for the sake of entertainment.

The royal couple will witness some Stampede events and preside over the kickoff of the annual parade next Friday before departing Canada for the United States.

In an open letter to the royal couple, PETA president Ingrid E. Newkirk warns that William and Kate are walking into a "hotbed of controversy" if they attend the event.

"You may be unaware of what befalls animals at this much-criticized throwback event or that six horses died during the Stampede last year,'' she writes.

"Devices that are illegal in Britain, including electric shock prods, certain types of spurs and bucking straps that are cinched around the animals' groins, are used to hurt animals in order to enhance the spectacle.''

An official from PETA's head office in Norfolk, Va., said it doesn't matter that the royal couple's involvement with the Stampede could be described as peripheral.

"Whether or not the duke and duchess are attending these actual events, simply by endorsing the Calgary Stampede (they're) sending the wrong message to Canadians that hurting and abusing animals is OK,'' said senior campaigner Virginia Fort.

"We're hoping that the royal couple will show mercy for animals who will be tortured, injured and reeling in pain. Simply by choosing not to attend the Calgary Stampede they will be sending an important message.''

A Stampede official said Prince William and Kate will be given a brief demonstration on bull riding and the prince will have his picture taken as he throws a stove into the back of a chuckwagon.

"It's something the royals themselves had an opportunity to ask about and in discussion with them we agreed we would do this and they're quite looking forward to it as I understand,'' said Stampede spokesman Doug Fraser.

A growing number of animal welfare organizations have taken the Stampede to task for what they say is cruelty masquerading as entertainment.

Last year, the protest spread to Britain. A group called League Against Cruel Sports called on Ottawa to end ``the immense cruelty''

inherent in rodeos and suggested to British travel agencies that they refuse to offer vacation packages to the Stampede.

More than 50 MPs signed a motion in the British House of Commons that asked the Canadian government to improve how animals were treated at the rodeo.

The Calgary Stampede runs July 8-17. Stampede officials are implementing a number of changes to rodeo events and chuckwagon races this year. It's hoped the moves will improve safety for both animal and human participants.

At last year's Stampede, two horses died of heart attacks, two were destroyed after suffering injuries, and another broke its back while bucking too hard. Another died after experiencing health difficulties 40 minutes after a chuckwagon race.

All horses will now be inspected by veterinarians when the animals arrive at the Stampede and before and after every race.

There will also be a mandatory rest day after every four days of racing.

The number of outriders that accompany each chuckwagon as it thunders around a dirt track is being reduced to two from four.

Several riders have been seriously injured over the years.

Fraser said there has been an ongoing debate between people in favour or against the rodeo.

``These animal activists don't want us subjecting animals to pain, stress and other things,'' he said. ``You know what? We completely agree.

``The safety of animals should not be compromised and animal cruelty will never be tolerated in Stampede Park.''

Everyone wants something from Will and Kate - even the Humane Society
June 30, 2011 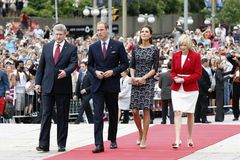 Royals en route - without anyone to squeeze William's toothpaste
June 30, 2011 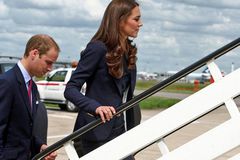 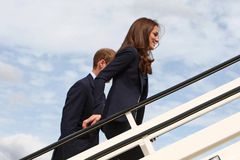 William and Kate touch down in Ottawa for royal tour
June 30, 2011
Follow us on Twitter @globeandmail Opens in a new window
Report an error
Due to technical reasons, we have temporarily removed commenting from our articles. We hope to have this fixed soon. Thank you for your patience. If you are looking to give feedback on our new site, please send it along to feedback@globeandmail.com. If you want to write a letter to the editor, please forward to letters@globeandmail.com.
Comments