When Porsha Perreault set out to make bread, she did it the old-fashioned way: Elbows deep in yeast, flour, salt and water, she mixed, kneaded and waited for her dough to rise - all to produce one precious loaf.

She had read about shortcuts - skipping the kneading, storing large vats of dough in the fridge to use over a few weeks - but thought they were just promotional stunts.

But after months of tired hands, she caved and, with much skepticism, tried out a few of the much-lauded recipes. Her verdict?

"It's a step up from if you were going to buy Wonder Bread."

Artisan bread is one of the baker's oldest and most sacred crafts: For thousands of years, precision and patience have been key to producing a light, airy crumb and a crispy crust. But when the no-knead, quick-prep trend hit a few years ago, led by a small group of prominent American bakers, hordes of amateurs and professionals alike embraced the new method. The result was a revolution in bread making that has divided the baking community. The key to producing the perfect country boule, traditionalists say, are ancient recipes and processes. No shortcuts.

The kickoff was New York baker Jim Lahey's no-knead recipe being even given the stamp of approval by The New York Times's Mark Bittman. The promise was even the most novice of home cooks could produce bakery-quality loaves. The instructions flew across the Internet, quite possibly becoming the world's first viral recipe.

But for bakers such as Ms. Perreault, it's the inherent finicky nature of bread making that is the attraction. She has worked her way through Daniel Leader's acclaimed Local Breads book and is in the midst of an artisan bread baking class at George Brown College in Toronto. She regularly bakes three loaves of bread each week.

"It's so precise. It's all about formulas," Ms. Perreault says. "With any other type of cooking you can be more free-form; [with this]you have to be exact or it just won't work."

The kneading step is a big point of contention: It was long thought to be necessary to form the gluten structure in the bread. The new wave of bakers, however, say the gluten can develop on its own when left to rest over time.

When Ms. Perreault pulled her first loaf of no-knead bread from the oven, she found it was denser than loaves she had prepared the traditional way. She tried a few more times with similar results.

"There's some stuff it just seems like it's more a marketing gimmick than a better way to do things," she says.

Jeff Hertzberg, co-author of the bestselling Artisan Bread in Five Minutes a Day, says the method is no trick. His legion of followers (whose queries he and co-author Zoë François always answer directly) has quickly grown since the book's release in 2007 for a good reason, he says.

"As soon as people see that a recipe [in other books]is on six pages, the book sits on the shelf," he says. "They have people in their lives and things to do and they have jobs."

His method is also free of kneading, but what is more revolutionary, he says, is that the recipes call for preparation of a large batch of dough that can be stored in the fridge and used to make four to eight loaves, which significantly cuts down on preparation time. The basic recipe has been blogged, reblogged and commented online by thousands. Most, it appears, are impressed with the results.

The longer you store the dough (up to a maximum of two weeks), the tastier it gets, he says. It's another assertion that has raised a few eyebrows among old-school bakers.

Jim Wills, a long-time professional bread maker who learned his art from working at European bakeries in his teens and early 20s, says the simple chemistry of how yeast works makes him suspicious of storing dough for more than a few days.

"After three days, the compounds in the dough begin to alter … and the structure of the gluten starts to break down. I have never seen people keep dough in the fridge for 10 days and get away with it."

As the head baker at Mary G's Artisan Breads in Prince Albert, Ont., he labours over just a few loaves worth of dough at a time before baking them in his wood-fired brick oven.

Another quibble he has with books that simplify bread making is that ingredients are measured by volume instead of weight.

While you can get away with measurements in tablespoons or cups when cooking a quick dinner on the stove, he says, you can't take those risks with bread.

Amy Scherber, owner of the three Amy's Bread bakeries in New York, says precision in measurement is so important that she creates separate recipes for her staff to use in the summer and winter that take humidity into consideration.

The starter dough for a baguette takes 18 hours to prepare and then it takes another seven hours to combine it with the main dough and bake it. She's tried out no-knead bread before, but prefers her own method.

"You end up with a spongy texture. I feel there's something that's missing in the dough."

Jocelyn Sia, a 35-year-old ice cream shop owner in Vancouver, made her first foray into bread making with Mr. Hertzberg and Ms. François's book. She'd never made bread before and impressed herself with the foccacia, rye and brioche she produced in her own kitchen.

Empowered by the results, she attempted a semolina bread recipe from a traditional recipe book: The Bread Bible by Rose Levy Beranbaum.

Ingredients were listed in a complex ratio-based system, starter dough was necessary, and the steps were long and complex. Whichever parts of the process the first book had demystified were once again shrouded in confusion.

"It didn't even turn out that well," Ms. Sia says. "It was too hard and didn't rise very much. I came running back to the Artisan Bread in Five Minutes a Day." 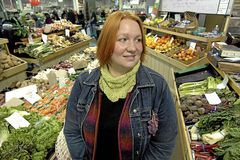 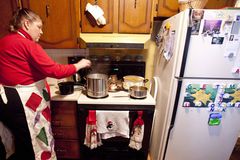