Motorsports are madly popular in the UAE where locals are swarming to the new Grand Prix circuit on Yas Island, a recreation destination rising 15 minutes from Abu Dhabi Airport and less than an hour from Dubai. Straddling both the racetrack and the neighbouring marina is the Yas Hotel: two futuristic towers veiled in LED lights that opened last November for the island's maiden event, the Formula 1 Etihad Airways Abu Dhabi Grand Prix.

This means that cars are cornering the speedway just beyond the dinner plates, an admittedly galvanizing sensation, which compels tables of Emirati men in flowing white dishdashas to abandon their shisha pipes and rush to the railing. This also means that cars are thundering under the bedroom balconies, a spectacle I found exhilarating - until about 11:30 p.m. (Rooms opening soon in the Marina Wing promise to be more serene.)

The tempo on Yas Island will accelerate even further as new venues open. Next week, Yas Island will inaugurate its crown jewel: Ferrari World Abu Dhabi (Ferrariworldabudhabi.com) with rides, restaurants and shops under a colossal Ferrari logo, slated to be the world's largest indoor theme park. Coming in March: the first holes of the Kyle Phillips Links Championship golf course. Fantastic Voyage

Whether the Yas Hotel's 219-metre grid shell draped in more than 5,000 LED panels reads as "poetic architecture of the future" or "low-flying UFO with designer shampoo" may be in the eye of the beholder. But once past the threshold, the austere design directive calculated to embody speed and aerodynamics is tempered by soothing references to the sea. The blindingly white lobby is softened with accents of squid's ink purple, seaweed and coral, and the freeform chandeliers are inspired by underwater bubbles.

The open feel of the large rooms is amplified by floor-to-ceiling windows. The oversized wet room - design speak for the bath - hides behind frosted panels that admit sparkling Middle East sunlight while preserving modesty. Amenities add a touch of whimsy with soaps layered like key lime pie, sparkling bergamot glycerin gel atop a soothing cream, and an aromatic temple balm, which I pressed into service when those cars were still buzzing by close to midnight.

Yet if every design detail has been carefully considered, a few glitches remain in the tricked-out technology. Beyond the carefully labelled iPod connector and easy-access complimentary Wi-Fi, even this reasonably tech-savvy traveller found a rather steep learning curve on the 42-inch LCD TV - BBC World must be here somewhere, I kept thinking - and what ever happened to those idiot-proof light switches labelled "on" and "off"?

Hospitality is deeply ingrained in Arabia's desert culture, where providing a warm welcome to travellers - and hoping for reciprocal treatment - is key to survival. So, even if as in all of the UAE most of the staff hails from elsewhere - a desk clerk from India, a waiter from Morocco, a driver from Sudan - the service ethic follows the gracious mores of this region. On my airport pickup, a hotel rep rides along in the sleek BMW, phoning ahead to assure that I'm greeted by name, and as I settle into my room a welcome tray of handmade chocolates arrives along with herbal wellness drinks in trendy pharmaceutical-style canisters.

Fourteen food and drink outlets ranging from the regal pan Arab Atayeb to the seafood restaurant Nautilus overlooking both the Formula 1 track and the marina, to the Rush Bar throbbing until 3 a.m., bring crowds of curious locals on weekends, which in this part of the world starts on Thursday night. The Arab sweet tooth, honed on dozens of varieties of sugary native dates, demands a decadent dessert selection at each restaurant and café.

At the Origins lunch buffet, I resolve the dilemma of choosing between a dish of silky sago pearl with coconut cream, dates flecked with gold leaf and caramelized pineapple by piling my plate with all three.

When guests have had their fill of Ferrari World's daring amusements and drivers testing their mettle against the twisting Grand Prix circuit, they can retire to two rooftop pools, a state-of-the-art gym supervised by a phalanx of imposing trainers, or come April, to a Moroccan hamam at the ESPA spa.

I liked the Yas Hotel far more than I expected. If photos of the aggressively styled lobby made me fearful of entering without a Gucci bag and Jimmy Choos, I found a warm welcome for all the Yas Hotel's multicultural guests, from abaya-clad women, to offspring of North American expatriates in Reeboks and shorts, to a jet-lagged business traveller trying to fit in. And the cars stopped at midnight. 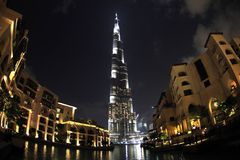