We pedalled through a perfect silence. There had been a chill at first light, but now, slogging up the rise toward the 558-metre Coll d'en Bas, the midmorning sun weighed heavily on our backs, and it was a relief to reach the top of this narrow pass. The view from the summit was modest: a pine-clad ridge, bending away to the right. But the prospect of what lay ahead was invigorating after the steep climb: A cycle journey through the heart of Catalonia to the shores of the Mediterranean, downhill all the way…

In Catalonia, in the northeast corner of Spain, the outlying ridges of the Pyrenees run right down the beaches of the Costa Brava. It's a rumpled region of pale earth, steep hillsides and dark pines dotted with ancient towns. At the turn of the 20th century, in a bid to bind together the isolated communities in the gap between the sea and the mountains, a network of narrow-gauge railways was laid across Catalonia and, until the 1960s, pocket-sized steam trains puffed their way over the passes. But as road traffic increased, the railways fell out of use; tracks were ripped up and the lines became little more than overgrown field paths.

In the past 20 years, however, the old routes have been rescued and turned into one of Europe's finest networks of organized cycle trails. With a few fall days to spare, my partner, Cara, and I had headed for Catalonia, equipped ourselves with hired hybrid bikes perfect for the smooth surfaces and gentle inclines and set out to tackle the 100-kilometre journey along the Vies Verdes, the Greenway, from the mountain town of Olot, to the fabled medieval city of Girona, and onwards to the sea at Sant Feliu de Guixols.

There was a scent of coffee and fresh bread on the sunny streets of Olot that first morning. The bus companies of Catalonia are well used to cyclists and we had been able to reach the town with our bikes – supplied by a Girona-based outfitter – in the luggage compartment of a coach. From now on, however, we'd be travelling under our own steam.

The first 10 kilometres of the Greenway, from Olot to the foot of the Coll d'en Bas, passed across a fertile plateau, ringed by a toothy range of volcanic peaks. It was a perfect day for cycling. We seemed to have chanced upon the elusive sweet spot at the apex of fall, when the sun is still hot enough to burn but the slightest breeze has a whetted edge. As we topped the Coll d'en Bas and began our glorious day-long descent, we were riding into a countryside on the very cusp between the seasons. The afternoon's journey brought a welter of images, etched in the sharp sunlight: reddening foliage arcing overhead; a lineup of men in flat caps sitting in silence outside the dark doorway of a bar in a wayside village; and paragliders appeared like falling leaves from a high limestone outcrop to the east.

The initial descent from the pass was steep, down through thickets of holm oak and patches of alpine pasture ringing with the clatter of cowbells into the valley of the Brugent River. But later the route levelled out and we passed through a string of valley villages – Sant Feliu de Pallerols, Les Planes d'Hostoles, Amer – each a clutch of red-roofed houses huddled around a sturdy gothic church, and each once a small station on the Olot-Girona railway.

Just after Amer, with the sun slipping down behind the high mountains and with tiredness and hunger beginning to creep up, we chanced upon a perfect rest stop – a bar perched above the whisky-coloured Ter River, where we feasted on olives, crispy patatas bravas and peppery Catalan botifarra sausages. Suitably refreshed, we headed on along the lower reaches of the valley as the mountains fell away behind us into a lavender dusk, rolling into the brightly lit streets of Girona as darkness fell.

Come daylight, we decided to take a break from the Greenway to explore the city's beetling ramparts and cobbled alleyways. Girona was once a way station on the Roman route from the imperial capital in Italy to Cadiz; later, it was tussled over by the Franks and Muslims; and eventually it fell under the sway of the Counts of Barcelona. Red, yellow and blue Catalan flags – reminders of a powerful regional identity hereabouts – hung from riverside balconies.

In summer, Girona gets its fair share of day-trippers, up from the beach resorts of the Costa Brava. But this late in the year, it felt like a forgotten gem, and after dark, the buzz in the cafés around the Placa de la Independencia came from the groups of local students, not from tourist crowds.

The next morning, bright and early, we continued our journey. The Greenway onward from Girona toward the coast rolled over a wide-open landscape. This was a different place from the valley world of the earlier stage and surprisingly, there was a stronger sense of the advancing fall here in the lowlands. The fields had already been turned over to lie fallow for the winter and when we stopped for a drink on a café terrace on the outskirts of the little town of Llagostera, we had to brush the fallen leaves off the chairs.

This was a shorter section than the stretch from Olot to Girona – just 40 kilometres. The trail here traced long curves across the gently billowing contours and the villages rose like castles out of the farmland. For the most part, we were well away from the roads here, and in places the Greenway crossed other, well signposted trails through the fields – sections of the network of cycle routes that criss-cross Catalonia.

In the final stretches, running along the broad valley of El Ridaura, were traces of the route's origins: a small station, with a sign still marking the office of the jefe de estacion (station boss), but with cyclists instead of steam trains passing by; and a little further on an old engine, paintwork still gleaming, marooned in a municipal park. Eventually, a little saddle-sore, we rolled into Sant Feliu de Guixols, following the final way markers for the route – always admirably clear where the Greenway passed through an urban area. Journey's end was a single railway buffer beside what had once been a harbour station where, until 1969, you could have clambered aboard a train for the long haul, all the way up to Olot.

Here, more than anywhere else, we could sense the coming winter. There was a chilly breeze blowing off the Mediterranean and the beach was deserted.

Inland, meanwhile, storm clouds were gathering over the Pyrenees and the memory of our magical, downhill journey from the mountains to the sea already seemed to belong to another, softer season.

A water-covered salt flats didn’t stop me from setting my own record
March 24, 2016 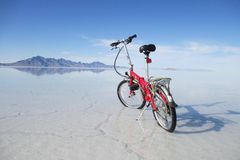 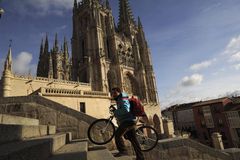 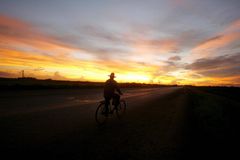