As hard as I’ve tried to convince my thirtysomething friends that cruising is a legitimate form of vacationing, they’ve always had one piece of argumentative kryptonite on their side. Cruising may be relaxing and comfortable, they mercilessly contend, but it’s expensive, predictable and – worst of all – totally unadventurous.

By way of a rebuttal, I present my most recent cruise: a 29-day, trans-Pacific crossing from Sydney to Vancouver on Holland America Line’s MS Oosterdam. Its itinerary was enough to make the coolest sophisticate blush: Stops in Hawaii and Fiji were somewhat expected, but I couldn’t find a single friend who had been to American Samoa, or even heard of Vanuatu. Hopping between South Pacific islands – microscopic dots scattered in an unfathomably vast ocean – is normally a magnates-only affair requiring chartered yachts and private planes. But because this was a repositioning cruise – a once-a-year opportunity to catch a ride as the cruise operator moves its ships to thawing Alaska from cooling Australia – it was downright cheap, coming in at less than $100 a day. As for adventure, I had my share. 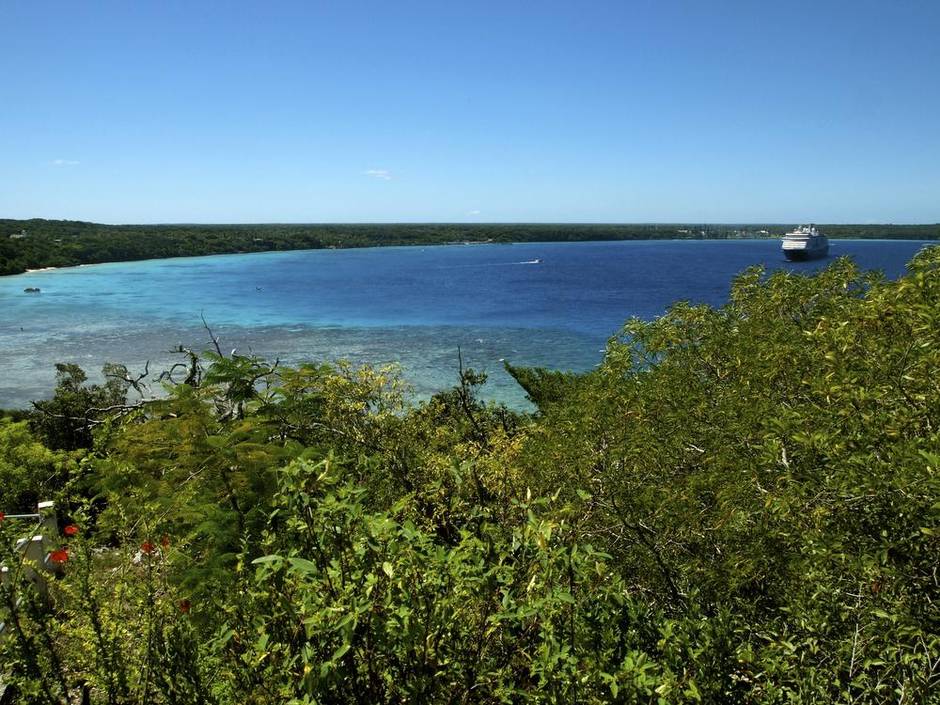 Lifou, New Caledonia, and not a single hotel or souvenir shop in sight. (Marta Balcewicz)

From the first two stops, it was immediately clear that this wasn’t going to be anything like that great cliché of waterborne leisure, the Caribbean cruise. Simply put, the South Pacific is not touristy. No improvised market greeted the ship at the port of Nouméa, the French-speaking capital of New Caledonia, nor were any complimentary shuttles waiting to whisk us to overpriced jewellers.

Instead, a city went about its business, indifferent to the 1,500 interlopers who had descended for the day. The next morning, I awoke to find our ship moored off an abandoned stretch of New Caledonian coastline near Lifou. Riding ashore on the tender boat, I saw miles of white-sanded beaches and coconut-filled palm trees, but not a single hotel, souvenir shop – or human soul, for that matter. Going for a swim with my snorkel gear, I encountered a bustling underwater city of fluorescent coral, incandescent fish and gentle sea turtles. Like their counterparts in Nouméa, they barely seemed to notice me. 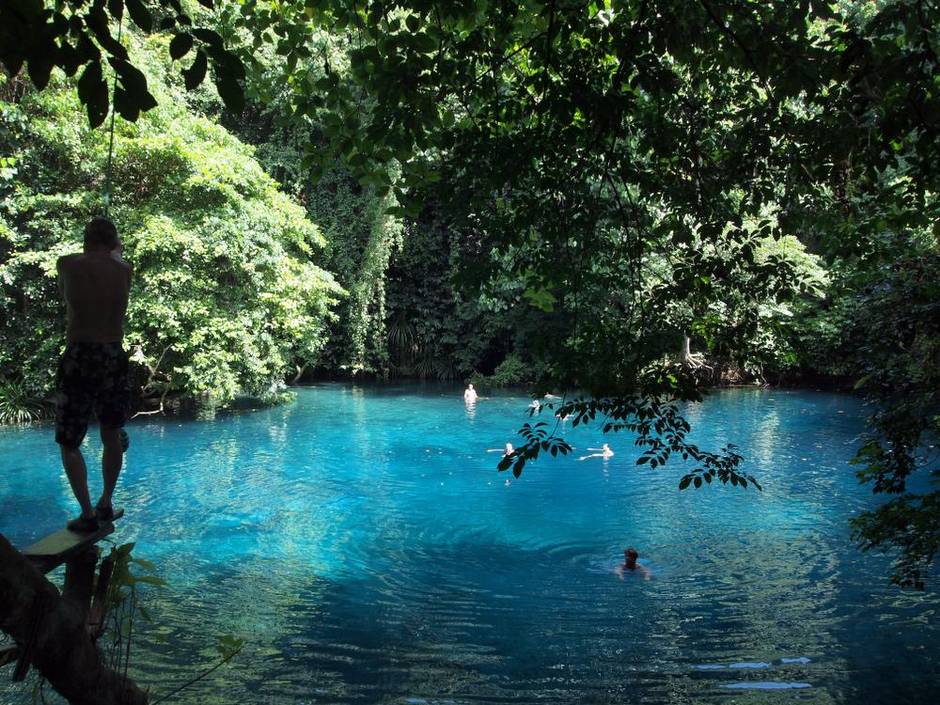 Charming as the ports could be, the golden rule of cruising was nonetheless in effect: To gain a real sense of the place you’re stopping off at, you need to get as far from the dock as possible. But here, a dilemma presents itself. On the one hand, you can sign up for a ship-organized “shore excursion,” which is expensive and crowded but guarantees the ship won’t sail away without you. Or you can throw caution to the wind, organize your own tour, and risk being stranded on a remote island if your rental car pops a tire. In the name of scientific thoroughness, I took the easy route in Luganville, Vanuatu, where most of the ship’s outings focused on the area’s Second World War history. Cruisers looking to relive James A. Michener’s military experiences in the area – the basis of the hit musical South Pacific – could seek out the wreck of the SS President Coolidge or go snorkelling at Million Dollar Point, where colourful fish frolic amid the rusty machinery sunk by the decamping United States Army. 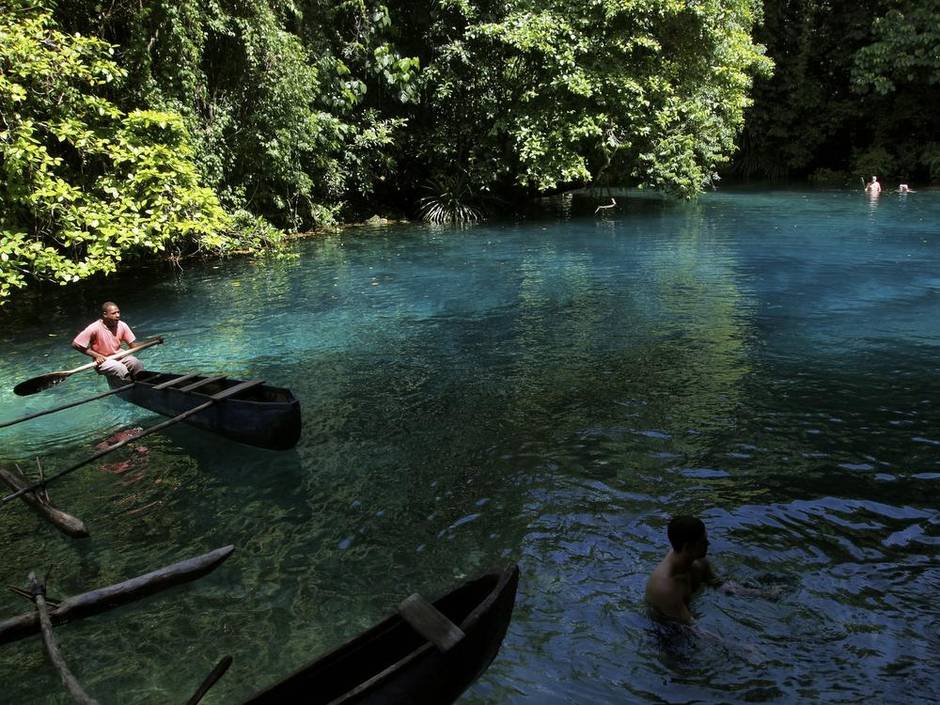 I opted to skip the sunken artillery and head for the Blue Hole, a stunning swimming pond (complete with Tarzan-style rope) in the midst of a dense jungle, accessed by a canoe ride up the Riri River. As I treaded water in the prismatic pool, I struck up a conversation with Allen, a fellow Oosterdamer who informed me that he had organized his own route to the Blue Hole at about a tenth of the cost of my tour, and that he had several more stops in store that day, including all the military sights. Recognizing a potential partner, I tracked him down in the buffet that evening and made a bold proposition: He had the negotiating skills, but I had the Lonely Planet – why not team up? An alliance was formed – “Double-A Tours,” as it became known to its patrons.

If I may be so immodest, the trips Allen and I devised were masterpieces of their kind. Pago Pago in American Samoa presents a fascinating American variation on the Polynesian theme. In the background, mountains rose at right angles from the sea, waterfalls dotting their upper slopes; in the foreground, long-haired boys played football in Pittsburgh Steelers jerseys, honouring local NFL hero Troy Polamalu. Adventure lay in wait outside of town – and we had exactly eight hours in which to pursue it. Hiring a driver with a converted school bus, we headed to the easternmost tip of Tutuila, where we chartered a rickety private boat to the tiny nearby island of Aunu’u. Though we annoyed the Aunu’uans by failing to ask permission before crossing, we placated them with a small gift, and were left to explore the island’s treasures: a pit of quicksand, a dramatic reef and a salty swamp inside a dormant volcano. When we got lost in the crater, friendly locals rescued us and gave us a lift in the flatbed of their truck. We were back on the ship in time to catch the start of the dinner buffet. Total cost per head: $10. 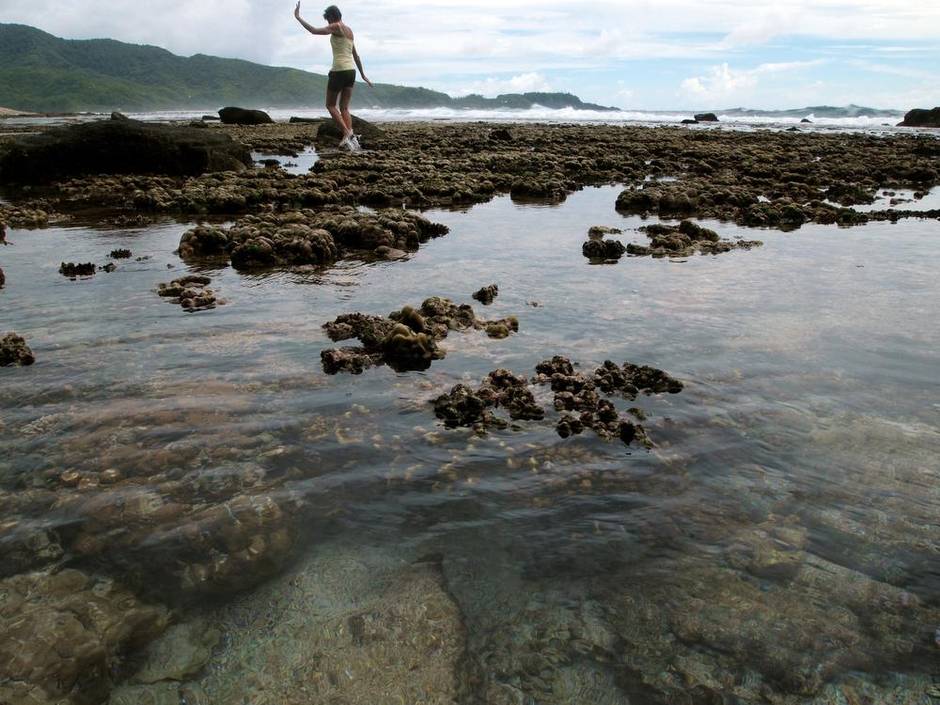 In Fiji, our ship had planned stops at a pair of ugly industrial ports on either side of the main island, Viti Levu. Since nothing interesting was within striking distance of either, we concocted an overnight stay in a traditional Fijian village in the remote centre of the island. Disembarking in Lautoka, we took a bumpy four-hour SUV ride into the Nausori Highlands. Sitting in a thatched bure hut in the village of Navala, my tongue numb from several rounds of kava, the favoured local intoxicant, I couldn’t have felt further away from the Oosterdam or the 21st century. By the next afternoon, we had passed through the gritty and unfriendly capital, Suva, and were back on board. Our brazen escapade was the talk of the ship. 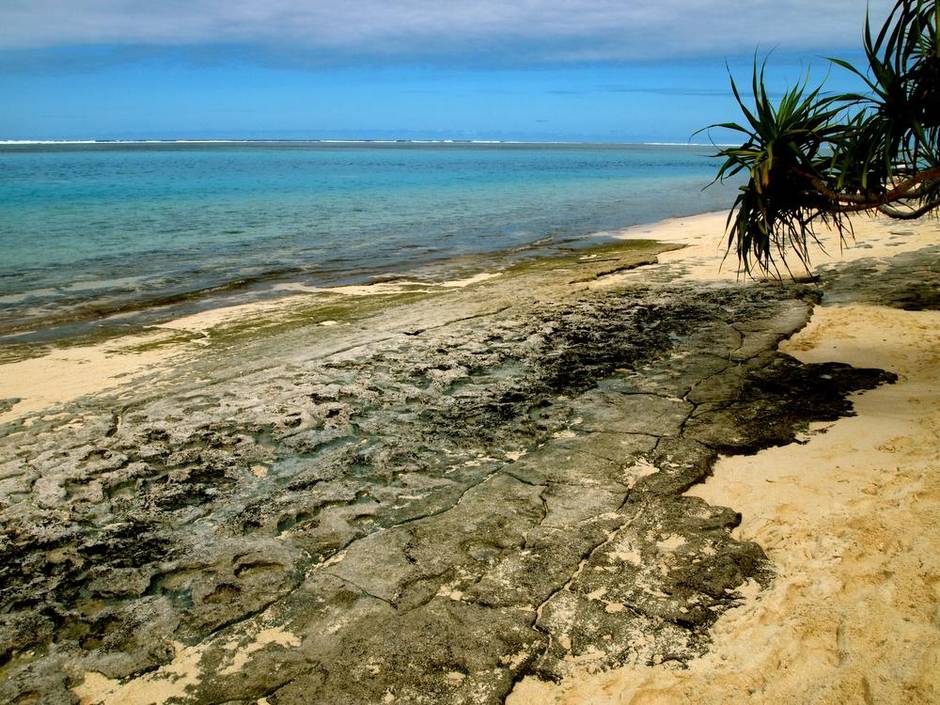 These imaginative feats led to some hubris, I will admit. At a certain point, I became addicted to cramming in as much as possible, and cutting it as close as I could to all-aboard time. In five hours in Kauai, Hawaii, we covered every mile of the island’s horsehoe-shaped highway, from the Waimea Canyon to Hanalei Bay and back. We left ourselves 10 minutes to return the rental car and get back to the ship. One of our fellow travellers had a minor nervous breakdown. For the stop in Port Angeles, Wash., we organized a Kurt Cobain-themed, 500-kilometre circumnavigation of the Olympic Peninsula, the birthplace of grunge. Finding ourselves far behind schedule on the return journey, we were forced to speed desperately up Highway 101 to make it back in time. When an oncoming police cruiser made a violent U-turn to pursue us, we thought the jig was up – that Double-A Tours had finally flown too close to the sun. Then, in an act of divine intervention, the cruiser pulled over a different car.

We were the last ones on the ship that night, making it with not a minute to spare. The ship’s security officer could afford to replace his usual exasperated expression with a warm smile – for this was the Oosterdam’s last stop, and our last chance to test the limits of sail-away time. As the gangplank was raised behind me, the exhilaration of this final escapade faded into forlorn resignation. The adventure was over.

MAKE YOUR OWN EXCURSION

Operating your own independent shore excursion squad takes planning, discipline and a little luck. Here are some hints to get you on your way.

Pack your travel guides: Information is a scarce resource on the high seas: Internet is expensive and the ship’s library always seems to have every guidebook except the one for the next port. Bring your own and spend your days at sea cooking up brilliant itineraries– and making friends, as less prepared passengers cozy up for travel tips.

Befriend a barterer: Dockside negotiations with taxi drivers and tour operators are not for the faint of heart. They require an iron will, a heart of stone and the gift of gab. Canadian timidity will get you nowhere. Texan affability – like I found in Allen – on the other hand, will get you everywhere at a reasonable cost.

Don’t panic: When you’re taking a dip at Hanalei Bay, with three hours to go until all-aboard and an hour-long drive ahead of you, a little voice will whisper, “Why risk traffic? Head back a little early.” Then a louder voice, one of your fellow passengers, will tell you in no uncertain terms that it’s time to get going. Ignore them both. You might never be in Kauai again, and you’re only there for five hours. Take a deep breath and enjoy the view.

Don’t force it: On the other hand, if you can’t handle the stresses of planning, bartering and possibly missing the ship, don’t bother. Ship-organized tours might be expensive, crowded and a little predictable – but they’re 100-per-cent risk-free. If you’re the one nagging your fellow independents at Hanalei, it’s time for a change of course. 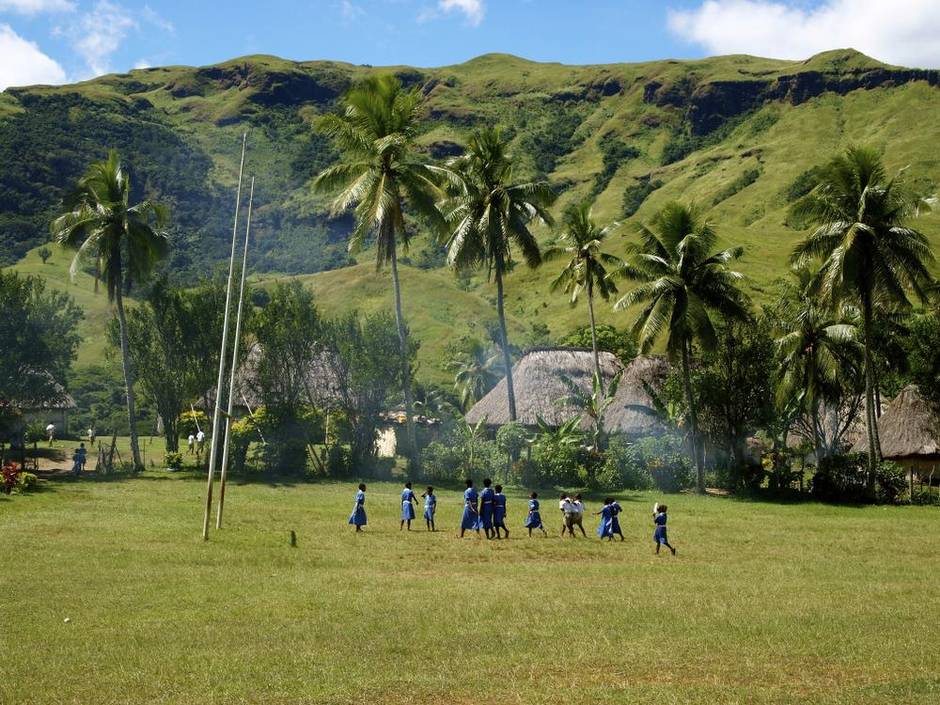 Surrounded by the thatched huts of Navala, Fiji, you’ll feel as if you’ve journeyed back in time. (Marta Balcewicz)

Here are a few of the cruise lines that offer South Pacific sailings. Prices are per person, based on double occupancy.

Oceania Cruises: South Pacific Splendours is a 17-day trip from Auckland to Papeete, from $7,085. oceaniacruises.com

Princess Cruises: The Fiji & South Pacific itinerary is a 14-days roundtrip from Sydney, from $1,980. princess.com