Torrential downpours soak the decorations on the chrome jeepneys roaring in the streets of Manila. It is a rain that brings no relief from the heat, although it does dampen the relentless sun, turning the sky into the faded colour of a Manila envelope. Heat, dust, noise - I need an escape, an island paradise all to myself. The Philippines is made up of more than 7,000 islands, so I had come to the right place. Just a short flight away is the province of Palawan, which has long inspired escapes for writers, divers and travellers.

Within the Philippines, Palawan has the least amount of people and the most surrounding islands. Because of its wealth of protected areas, it is proudly referred to as the country's "Last Ecological Frontier." In 1967, the entire province was declared a Fish and Wildlife Sanctuary, which is odd considering its capital, Puerto Princesa, is the country's fastest-growing city. Besides the natural beauty and relaxed pace of life, the growth might have something to do with Palawan sitting outside the typhoon belt. Not that I would be escaping the rain, which fell like bullets shot from the sky. Locals, though, scooting about in a strange-looking tricycle taxis, are protected from the rain in their boat-like cabins, which might come in handy if it floods.

I decide to escape the rain - but not the wet - by heading underground, to a subterranean river system I had heard about and was longing to explore. It's a 50-kilometre potholed drive from the city to one of Palawan's more popular attractions, the Puerto Princesa Subterranean River National Park. A rich ecosystem packed with birds, flora and fauna, it is one of the island's two UNESCO World Heritage Sites. It is also home to the world's longest navigable underground river, an 8.2-km waterway that creeps into a limestone cave. Tourists don hard hats and flashlights, rowing the first kilometre to enjoy the bats and cave formations. As the cave mouth slowly disappears, the acrid smell of guano accompanies a sensation that a beast, complete with rows of stalagmite teeth, is swallowing us alive. We reach the cut-off point and gladly turn the boat around. Caves are fun, but not as much fun as seeing light at the end of the tunnel.

Alongside the underground river is a 5.2-km rain forest trek called the Monkey Trail, which is perfect for spotting lizards, birds, squirrels and, of course, monkeys, which are known to pillage visitors' lunchboxes. Later that afternoon, the true beauty of Palawan hits us aboard a wooden bangka, the small motorized outrigger that is transporting us back to the nearest town. A warm breeze atop the South China Sea caresses our small group as the sunset breaks through clouds in warm hues of orange. The intoxicating exoticism of the moment moves us to tears; the moment forever captured on film by a friend in an adjacent bangka. It's one of my favourite photos from all my travels.

Back at the hotel, a tourist brochure catches my attention, inviting visitors to an unusual prison community called the Iwahig Penal Colony. Here, in this institution without walls, 3,000 prisoners - ranging from minimum to maximum security - live and work. Tourists are welcome to visit and learn about their life, and to purchase handmade crafts from the prison gift shop. It's all very utopian, until you hear about "orientation" centres for escapees and encounter prisoners selling their brown, blue and orange prison T-shirts on the side for extra money. I buy a medium-security blue T-shirt from a prisoner, who warns me not to wear it anywhere in the Philippines. While it's an unusual souvenir, I later decide it's in poor taste to wear it anywhere. Devoted to the freedom of travel, there's nothing cool about being locked up, even in a prison without walls.

I decide to leave the city of Puerto Princesa to explore a region I had first discovered many years ago in Alex Garland's bestselling novel The Beach. About a secret backpacker island paradise in Thailand, it was later made into a movie starring Leonardo DiCaprio. Though the book and movie were set in Thailand, the author was inspired by the northern tip of Palawan. Now, I could see why. Known as El Nido, it is a tropical wonderland of crystal-clear water, white beaches, emerald lagoons, limestone cliffs and world-class marine life. It is still a backpacker paradise, but such luxury hotels as the environmentally friendly El Nido Resort (elnidoresorts.com) on Lagen, Apulit and Maniloc islands cater to wealthier clientele with gorgeous villas over the water, outstanding service and gourmet meals. Guests can lie on the beach, scuba, snorkel or rock climb the surrounding limestone cliffs. On Lagen Island, I opt to explore nearby lagoons by sea kayak, encountering water so blue and clear I feel like I'm sailing in a glass-bottom boat.

There's a reason why Jacques Cousteau called Palawan the most beautiful place he had ever explored. The rainbow of colours of fish and coral is extraordinary, more so when viewed through a mask while floating among the giant jackfish, luminous angelfish, feisty clownfish and the much bigger manta rays and whale sharks.

If it's ultimate seclusion you're after, resorts and local operators can take you to one of El Nido's 45 islands for the day, complete with a picnic, perhaps a bottle of wine. Some hotels have set up little shelters, but the island is all yours - to laze on the beach, snorkel or explore the rain forest. I choose an island ringed with coconut trees, white sandy beach and, finally, turquoise water. With the island all to myself, I can see and feel Mr. Garland's inspiration. No crowds, no stores, no traffic in earshot, no bothersome beach hawkers. I feel like a castaway, a bottle of hopes and dreams washed up on a beach where none of it really matters any more. At last, my own private island paradise.

But I know it wouldn't take long for this exhilaration to turn to loneliness, for the diet of coconut to feel stale. Fortunately, there is a bangka coming to pick me up at the end of the day and deliver me back to friends, a comfortable villa and the resort's delicious buffet.

After a few days, the reality of modern life rears its head in the form of a bumpy flight back to Manila. Our small prop plane, flying direct from El Nido, hits a thunderstorm, erratically bouncing around the sky. On arrival, I get on my knees and kiss the landing strip in gratitude. But, as we drive from the airport, inching forward in choking traffic, I long for the shade of a coconut tree. Perhaps no man is an island, but he can aspire to live on one.

Robin Esrock is the host of the OLN/CITY-TV series Word Travels. His website is moderngonzo.com. Let your stress slip away in the Cook Islands
April 13, 2011 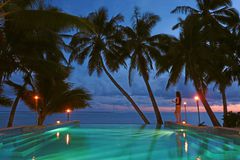