It's a sunny February morning in the Bahamas, and we're running across a tidal flat, the water green as glass and the close bottom unfurling at high speed beneath the boat. Finally, my guide, Alvin Bauld, kills the motor, unlimbers his poling stick and climbs onto the high platform at the rear. Humming a song, he takes some lens cleaner, wipes down his polarized sunglasses with his pink bandanna, and smiles at me like a man who loves his job. "Okay," he says. "Let's see if we can find Mr. Bonefish."

I'm peeling off 20 metres of fly line and shooting an experimental cast across the water. I've been waiting almost a year to get back out on the flats, and now that I'm here, I can feel the old tension returning. Piling the line carefully at my feet, I examine the hook point on the little Crazy Charlie, and silently run through my pre-game checklist. ("Okay, don't get sunscreen on the fly. Watch your backcast in this wind. Stay calm, stay calm. It's just a fish.")

Alvin, who is the size of an National Football League linebacker, leans into the pole and we glide forward into the silent world of the bonefish. The tidal flat is covered with a pane of turquoise water that stretches all the way to the horizon. Beneath the boat, puffs of powdery sand whirl along the corrugated bottom, showing that the tide is coming in. Here and there, schools of baitfish dart away from the boat's approaching shadow.

Alvin's head swivels as evenly as a radar dish as he scans the water. All my nagging thoughts of obligations, scuttled plans and errands left unfinished recede when I'm out here. One has to look for bonefish in a state of high alert, aware of every nuance of the environment - the dance of light on the sand, the changing tint of the water as a cloud moves across the sun, and the certainty that at any moment, something is going to happen.

My father taught me to fish when I was a kid, but he and my mother never took winter vacations. They couldn't afford it, and I didn't know anyone whose parents could. We're luckier, nowadays, and many of us have come to regard a midwinter getaway as a standard perk for weathering the Canadian cold. I first started going to Mexico many years ago, and always took a spinning rod to have something to do. It was enjoyable to go exploring, and to cast lures in the booming surf with seabirds wheeling overhead.

Whatever one's sport, there's always a desire to get better, so I eventually took up fly-fishing - a comic and pointlessly difficult pastime you could spend your whole life trying to master.

Of all the species pursued with a fly rod, saltwater fish are the most challenging, and of these, few are more difficult than the Albula vulpes, the bonefish. Over the years, I have pursued bonefish in Cuba, the Florida Keys, Bimini, Abaco and other cult destinations, and I've learned that you can't go wrong with Andros, Bahamas, the self-proclaimed bonefish capital of the world. And if you have a girlfriend, which I thankfully do, you furthermore can't do better than a little boutique resort called Kamalame Cay, at the north end of Andros. That's where Alvin works. He's the veteran, the Bo Diddley of the bonefish flats, and you better call well ahead if you want his time.

Most bonefish lodges are built for men - a pair of single beds in the room, a tin shower stall with rust on the pipes, a pool table and wide-screen TV in the bar, and a couple of bologna sandwiches in your daily lunch cooler. Kamalame Cay, as far as I know, is the only place in the Bahamas where anglers can partake of the world's best bonefishing while their non-fishing partners can delve into the pleasures of gourmet dining, private beachfront villas, a spa with yoga classes and so on.

My partner, Ann, and I have been to Kamalame Cay four or five times now, and we both regard it as one of our favourite places in the world, for different reasons.

This morning, Ann is back at the resort taking a guided nature walk, exploring wild flowering plants, while Alvin and I are out here baking in the sun and trying to outsmart a fish with a brain the size of a gnat. The bonefish doesn't need a brain to outsmart the likes of us because it is empowered by nature to flee at blinding speed from the slightest sound or flash of movement, and when Alvin spots a school of bonefish, my first over-eager cast lands too close and has the same effect as flinging a grenade - pandemonium, fish careening in every direction. "That's okay, man," Alvin says with a chuckle. "We find some others."

Ten minutes later, hawk-eyed Alvin spots another group. This time, I'm determined not to frighten them, and after repeated casts they swim away without seeing my fly. This is not good. In my memory, I can cast better than this. Alvin, however, eases my embarrassment by telling me stories about his clients. ("Lots of women out-fish their husbands. The women take your advice, and the men just get mad.")

Not all guides are as mellow as Alvin. I tell him that once in Cuba, I blew a shot at a large tarpon and my guide did a complete Desi Arnaz, wailing inconsolably in Spanish, jumping up and down and pounding his forehead with both hands.

I tell Alvin I appreciate his good nature, and he smiles. "Yeah, man, everybody likes me." When a long wide cloud drifts across the sun, shutting off our visibility, he jams his pole into the sand and halts the boat. "Let's just relax and see what Mr. Sun is going to do."

For 10 minutes, we recline in our seats, drinking pop, talking about life, until Alvin, with his feet up on the gunwale, suddenly shades his eyes and looks across the water. "Bonefish at 11 o'clock, big one."

I scramble up on the deck, tearing line off the reel and looking for the fish, but I can't see it. Bonefish are hard to see at the best of times, and they're like floating holograms in this gauzy light.

I shoot the line, keeping it airborne, false casting as Alvin talks me toward the fish. ("More left, no, more right, okay good, let it drop.") I begin retrieving the fly in little hops and suddenly feel the weight of a solid bite, the line tightening like a banjo string. Now I can see the bonefish, a finned shadow racing across the bottom. The line slices through the water and the reel screams. "That's what we like," Alvin laughs. "Fish on!"

Toronto to Nassau. From there, several local airlines fly the

15-minute route to Andros Town airport, where the van from

KAMALAME CAY Staniard Creek, Andros, Bahamas; 800-790-7971; www.kamalame.com. Rooms start at $840 a night, with variable fishing fees, depending on where your guide takes you and how long you'll be on the water. Guide Alvin Bauld can be booked through the resort. 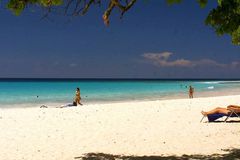 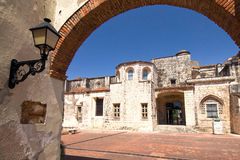