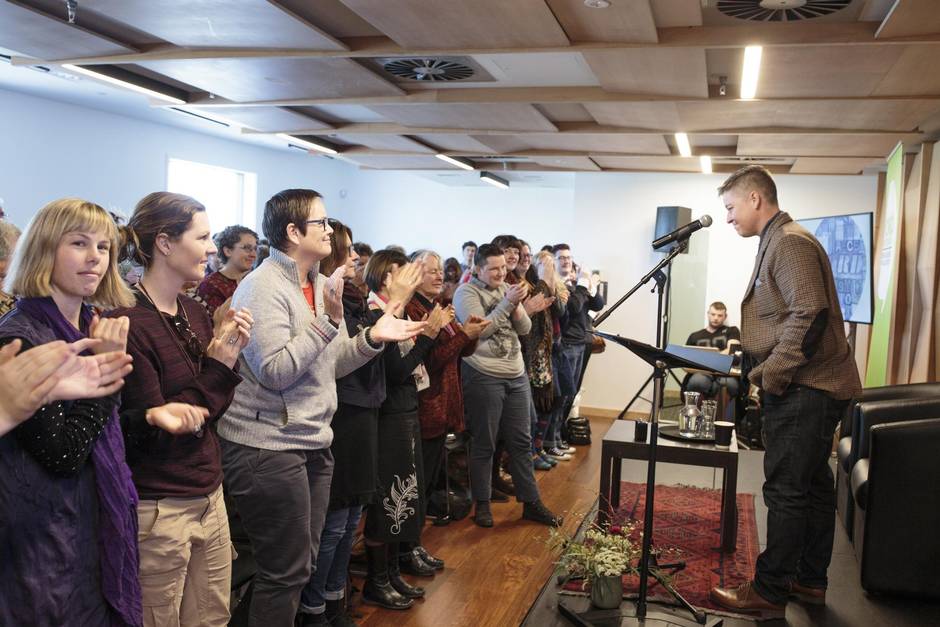 By the end of the WORD Christchurch festival, all of Canadian author Ivan E. Coyote's books had sold out.

In Christchurch, an exhausted city where boarded-up buildings, lots stripped bare and a partly tumbled-down cathedral speak to the devastation of an earthquake five years ago, the Piano Centre for Music and the Arts is a salve; a balm for residents who have suffered so much loss, and are frankly tired of being described as resilient. The sparkling new building – its curves were inspired by a grand piano – speaks to hope and possibility; it sits across the street from what used to be an office tower and is now a vacant lot.

One of the first events to take place in the Piano is WORD Christchurch, a biennial writers’ festival. You can still smell the fresh paint at the opening session: “Can Books Change the World?” Here, it feels as if they can. Books – and a new Canada Council for the Arts initiative – have opened up a fresh literary exchange between New Zealand, Australia and Canada.

Three Canadian authors – Ivan Coyote (Tomboy Survival Guide), Giller-winner Elizabeth Hay (Late Nights on Air) and Sheila Watt-Cloutier (The Right to Be Cold: One Woman’s Story of Protecting Her Culture, the Arctic and the Whole Planet) – and one artistic director, Hal Wake of the Vancouver Writers Fest, were sent Down Under and beyond. Unlike typical travellers, who go to learn about a country, these writers would share their Canadian stories and literature halfway around the globe. But they would learn a lot, too.

Joining the group on this adventure, I was reminded of a long-ago session at the International Festival of Authors in Toronto where I conducted an on-stage interview with Australian writer Andrea Goldsmith. She was unknown in Canada and you could count on one hand the number of the people in the audience – with digits left over.

Fifteen years later, I wondered if the Canadians might encounter the same problem in the southern hemisphere. Once there, checking out bookstores in Christchurch, Auckland and Melbourne, I found the same results again and again: a shelf full of Margaret Atwood and Alice Munro, maybe one or two novels by Yann Martel or Michael Ondaatje – and not much else by way of Canadian content.

For the Canadians, the trip comes with many perks and potential but also some anxiety. Wake, preparing to conduct the interview for a Christchurch festival session titled “Canadian Tales: Elizabeth Hay,” has some concerns about attendance. As a Scotiabank Giller Prize winner, Hay is a familiar and celebrated figure in Canadian literary circles, but not in New Zealand. 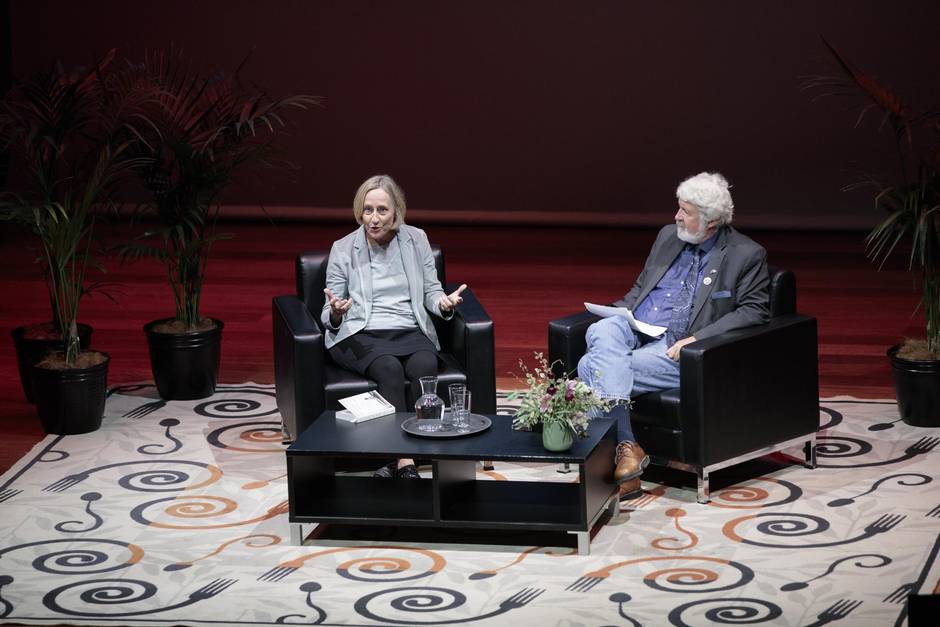 What’s more nerve-racking, it occurs to me, is that her latest book, His Whole Life, deals with Canadian politics during the 1995 Quebec referendum. Will anybody care to hear what’s happening in Canada – a country described by one character in the novel as “a dull country. … Nothing important happens here. Nothing interesting. Canada is the centre of nothing.”

Yet that day in Christchurch, there’s a healthy turnout in the pouring, late-winter rain.

“I don’t know anything about Elizabeth Hay,” says Jane Allison, one of about 80 people there. “I’m just interested in Canada.”

And they’re interested in Canada’s Prime Minister. When Wake asks the audience how many people have seen a picture of Justin Trudeau with his shirt off, hands fly up. People are laughing, but the question leads to an in-depth discussion with Hay about Canadian politics and publishing, underdog protagonists – and poetry, which is how Hay starts each writing day. She wins instant fans, as she does at every event, with her thoughtful commentary and dry wit.

When the hour is over, the crowd files into the crammed pop-up bookshop. “I thought she was stunning,” says Penny Carnaby, who had never read anything by Hay before the session. Copies of Hay’s 2007 Scotiabank Giller Prize winning Late Nights on Air sell out, while the bookstore manager hastily restocks His Whole Life.

Thirty minutes later, Hay is still signing books. And by the end of the festival, all of Hay’s books, as well as Coyote’s and Watt-Cloutier’s will sell out, too.

That night, Sheila Watt-Cloutier impresses audiences while speaking on a panel of climate-change brains, including environmentalist Tim Flannery (The Weather Makers). At the gala immediately following, Ivan Coyote blows the crowd away – as the storyteller does again and again.

The writers later travelled to Melbourne, a cosmopolitan city on Port Phillip Bay at the southeastern tip of Australia with a great cultural – and foodie – scene. The lineup for an all-Canadian author event at the Australian Centre for the Moving Image in lively Federation Square snaked down and around the hallway. 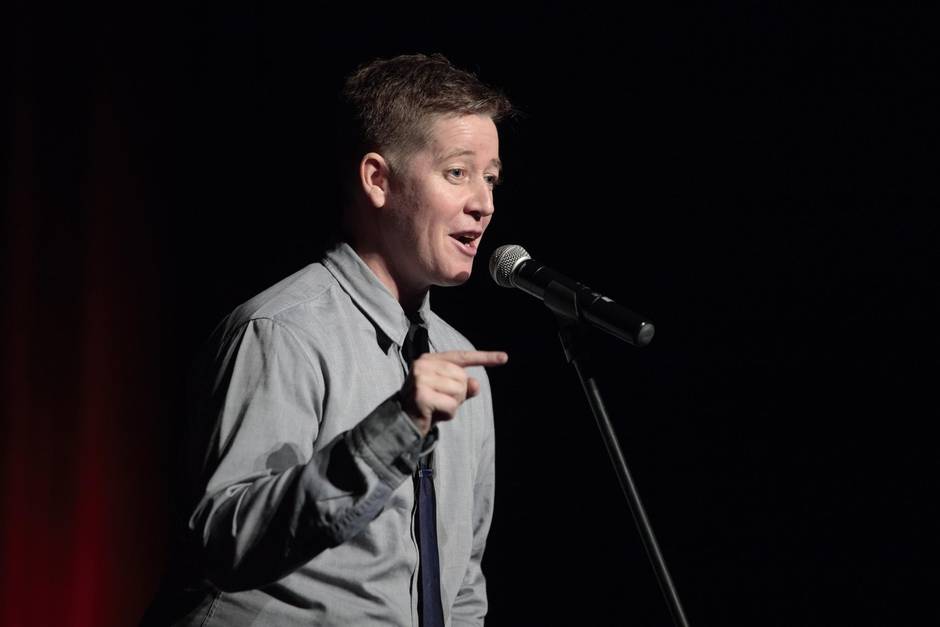 Parallels between Canada and New Zealand come up often in conversations; we are two countries in the shadow of a cultural giant – the United States and Australia, respectively. In Australia, further parallels are drawn – we are two relatively young Commonwealth countries; while Canada lives in the shadow of the U.S., Australians tell me they still feel the imposing cultural shadow of the United Kingdom. The implications for literature are two-fold: In addition to the difficulties in simply getting noticed, there is the challenge of having a multinational publisher pay attention to a relatively small market such as Canada or New Zealand, with its population of 4.5 million.

“We suffer from a kind of a voluntary blindness in some ways to each other’s literature because we both have to go through what amounts to the great clearing houses of London and New York publishing,” says New Zealand novelist Elizabeth Knox (The Vintner’s Luck). So when she and her husband, Victoria University Press publisher Fergus Barrowman, travelled to writers’ festivals in Calgary and Vancouver in 2008, they discovered many Canadian authors – “all these people writing these amazing books who we’d never heard of.”

Throughout the Canadians’ tour, it was obvious that even if the far-away audience has never heard of the author, it was the subject matter that sparked interest. Watt-Cloutier’s events are packed – there is a keen interest in indigenous rights and the issue of climate change. And there’s something about hearing from the author herself that ups the ante.

Coyote is a spoken-word rock star who blows away every audience. At Coyote’s final event in Christchurch, the place is packed; it’s standing room only with more and more people trying to finagle their way in. Young queer kids mix with the literary establishment. Everyone wants to hear Coyote. People weep as Coyote, who is transgender, reads a story about a mother whose son was born female, and wants some advice to ensure he would be happy. The woman next to me passes out tissues.

If anything gets lost in translation, nobody seems to mind. “I was tobogganing,” Coyote reads, then pauses. “Do you know what that is?” (The audience does.) At other readings, Coyote clarifies what they fear might be Canadian-specific references, reading the Wikipedia entry for “gopher” and explaining “in Canada, we call toilets bathrooms.”

The reading ends what Coyote calls a literary Dorito – an ultra-short piece: “My new shirt. Plaid on the outside, but with flowers on the inside. Just like me.” The place hops to its feet and roared with a standing ovation.

“Ivan has been the absolute hit of the festival,” King says later that day.

‘Our literature ought to be talking to each other’

While in Melbourne, I tracked down Goldsmith, the author from that poorly attended IFOA session years ago. We met at the excellent Readings bookstore on Lygon Street. Goldsmith, who won the 2015 Melbourne Prize for Literature for her novel The Memory Trap, remembers it well (“it was terrible”), but also tells me that her reading, held a different night, was a success – and led to a deal with a Canadian publisher.

While the countries have a lot in common, there’s a literary disconnect. Goldsmith rarely comes across reviews for Canadian books and she imagines Canadians don’t know much about Australian writers either.

“Our literature ought to be talking to each other,” she says. “I’d love us to link arms and walk off into the sunset together, buying books as we go.” 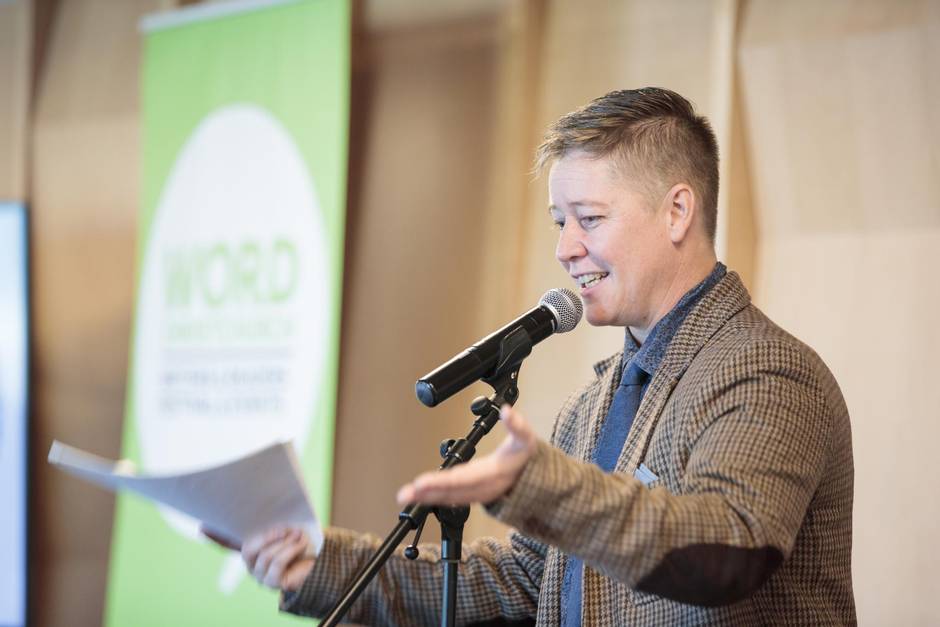 Coyote, who is transgender, drew tears from a packed audience as he read a story about a mother whose son was born female, and wanted some advice to ensure he would be happy.

The Canada Council initiative is meant to remedy this. The program has sent Canadian writers to places such as Galway, Ireland; Edinburgh, Scotland; Mantua, Italy; and Ptuj, Slovenia.

On this trip, Wake’s group found more speaking opportunities outside the Christchurch festival. Coyote travelled to Brisbane for the Queensland Poetry Festival. After Melbourne, Watt-Cloutier spoke at the Festival of Dangerous Ideas at Sydney Opera House. She and Hay also made a side trip to the Dunedin Writers & Readers Festival, further down the coast of New Zealand’s south island. And in between Dunedin and Melbourne, Hay flew up to the north island to read at the Women’s Bookshop in Auckland, where her books again sold out.

“It’s very hard for a book to cross an ocean if the author doesn’t take it there. It just sort of lands, is barely reviewed, has a negligible presence in bookstores and it disappears,” Hay says over a flat white coffee in Melbourne. “Even if you come to writers’ festivals, that doesn’t necessarily solve the problem. It’s really an uphill battle. Which is why New Zealand was such a surprise to me.”

The Canada Council granted the Vancouver Writers Fest up to $20,000 in funding for the outreach. But even with the books selling out, and even if you count hypothetical future sales, the dollar amount won’t equal the cost of the trip.

Of course, that’s not the point. Audiences there now know about about Ivan Coyote, Elizabeth Hay and Sheila Watt-Cloutier. They’ve learned something about Canada. And, yes, maybe they bought a book, or will in the future.

“That’s the goal. To promote the fine, fine writers that we have,” Wake says. “Artists generally present a vision of who we are as a country and I think we have stories to tell around the world.”

The writer’s travel was covered by the Canada Council grant to the Vancouver Writers Fest. Neither organization reviewed this article.

Looking for an excuse to travel? These are literary festivals are as fascinating as their destinations.

The multigenre arts and ideas festival in New York is renowned for remarkable literary offerings and serious star power. Oct. 7 to 9; festival.newyorker.com

The annual gathering of international writers, billed as the world’s largest free-book festival, will hold its 10th edition next year. Jan. 19 to 23, 2017; jaipurliteraturefestival.org

Come for the prose, stay for the spectacular venues, including Walsh Bay on Sydney Harbour and the Sydney Opera House. May 22 to 28, 2017; swf.org.au

Not fluent in Icelandic? No worries. Interviews, seminars and talks are conducted in English – as if you needed another reason to visit the stunning island. Sept. 6 to 9, 2017; bokmenntahatid.is