The clip-clop of cycling shoes fills the cobblestone square outside La Fabrica Girona, a coffee shop in this bike-mad Catalan city. Lycra is everywhere.

Amber and Christian Meier, the Canadian expats who run the café, have catered to the local enthusiasm with photos on the walls of grimacing, emaciated men climbing mountains on two wheels. Mr. Meier, a pro rider with the Australian team Orica GreenEDGE and an avowed java geek, provided the thematic cues for this den of caffeine and unitards.

But the shop is more than his pet project. La Fabrica's animating spirit and its reason for existing, both husband and wife will tell you, is Ms. Meier.

After years as a self-described bored housewife, struggling to find a place in a foreign country dense with alienating folkways, she finally feels purposeful and at home through her work at the café. It's a curiously old-fashioned story, the homemaker finding fulfilment by going out and getting a job. But the dilemmas and sacrifices of an earlier generation of women are not so remote for the wives of pro athletes.

The café, tucked away on a narrow side street, is gaining something like the status of an embassy; it is in, but not quite of, this quaint medieval city in northeast Spain.

Cycling is a cosmopolitan world. Orica GreenEDGE, for example, is an Australian team but half the riders – among them British, Swiss, Colombian, Dutch and Belgian nationals – live in Girona.

Fittingly, La Fabrica is a cosmopolitan place, with its Italian coffee machine ("the Ferrari of coffee machines"), Japanese-inspired cups (you hold them with both hands) and beans from El Salvador. Indeed, the shop is an exotic bird in Girona: The Meier fetish for elaborate brews and fine beans is novel here, where the coffee is routine, knocked back with a minimum of fuss.

The cheap and cheerful Iberian espresso wasn't the only national quirk that the Meiers had a hard time getting used to. Shops in Girona usually close from 1 to 5 p.m. for a long lunch, for example, something the couple relates with bafflement eight years after moving to Spain.

In the way of people forging a home away from home, the couple haven't entirely abandoned their native habits; they still eat dinner at 7 p.m. most nights, rather than at 10 or 11 like the locals. But the Meiers have grown to relish the Spanish lifestyle, picking up Gironan friends and employees, improving their Espanol.

"This is really home for us now," Mr. Meier said.

Christian and Amber met at a coffee shop in Murrayville, B.C., when she was a 16-year-old barista there and he was a 21-year-old cyclist from New Brunswick training with a team nearby.

But they fell for each other quickly, and started shuttling between Girona and Vancouver when she was 18. By the time she was 20, they lived in the Spanish city full-time. That was also the year they got married.

The couple were following a path to Girona beaten by a cadre of English-speaking cyclists in the 1990s. Like Mr. Meier, they were attracted by the city's proximity to the Pyrenees and a strong local cycling culture.

But during those two first years especially, Ms. Meier hardly put down roots in Catalonia. Instead, she followed Mr. Meier on the international race circuit. If a cyclist is always at home on his bike, a cyclist's wife is often doomed to the homeless limbo of hotel rooms and airplane terminals.

For her trouble, she got to spend very little time with her husband. The athletes lead such a spartan existence during racing season – their diets and sleep schedules and step counts are monitored with scientific assiduity by a team of trainers – that Ms. Meier was mostly shut out of Mr. Meier's day-to-day life.

Soon, for company, she joined the clique of Orica wives and girlfriends who went on hikes and trips to the beach together, a claustrophobic and back-biting group that provided little emotional nourishment.

"When you don't have a lot to do, you get bored. When you get bored, you get drama," she said. "At one point you could start a TV show: 'Housewives of Girona.'"

Being alone was worse. When she and Mr. Meier were together in Spain, she could busy herself with shopping and cooking. Above all, she could spend time with the man for whom still she evinces a kind of teenage puppy love.

But, she says, "when Christian was gone, my whole pyramid of how I was living would crumble." And Mr. Meier was on the road for 156 days last year.

Boredom and depression set in. She didn't drive, struggled to pick up Spanish (let alone Catalan), had few close friends – didn't even cycle.

A naturally sunny person who now acknowledges each customer's order with a chirpy "perfecto," she found herself so listless that she would rise at 9:30 a.m. many mornings and then promptly go back to bed.

"Last August it hit me like a ton of bricks – now what? So I had this big breakdown," she said.

Ms. Meier wanted to leave Spain, return home to Vancouver. At the height of the crisis, Mr. Meier urged her to go for a swim. She now performs a droll impersonation of herself that day, weeping while doing a breast stroke in the Mediterranean.

When she got back and dried off, he had a suggestion: that they pre-empt their retirement plan and open a coffee shop in town. It didn't take long for Ms. Meier to sign on to the idea.

From August to March they worked headlong on the café, renovating a century-old carpenter's work room (hence La Fabrica, which means "the factory" in Spanish) and navigating the maze-like local bureaucracy.

They've been open for about four months now, doing a brisk trade in cakes and coffee, even selling La Fabrica cycling uniforms in chic grey and pink. The Meiers say they're breaking slightly more than even, though money isn't the point – they've rebuffed more than one inquiry about opening La Fabrica franchises, and Mr. Meier's cycling salary is enough to live on.

Mr. Meier may be the shop's brooding auteur, but Ms. Meier is its leading lady: She serves the customers with a sunny smile, doggedly promotes the place on social media, and serves as head chef. 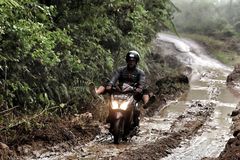 How couchsurfing changed the way I travel
July 6, 2015