I didn't set out to summit the second tallest mountain in New York State. I just wanted to go for a satisfying walk in the woods. But when you're in the Adirondack High Peaks at the tail end of winter with snowshoes strapped to your pack, and you ask a park ranger to suggest a challenging day hike, odds are he's going to recommend Algonquin Peak. So you'd better be ready to climb.

It was my decision, it should be noted, to take the long route – which, unbeknownst to me, is also the steep route to the top.

The nearly 20-kilometre loop (which begins at the historic Adirondack Loj, a short drive south of the village of Lake Placid) starts gently enough: a gradual climb though a pine-scented forest, with heat radiating off patches of bare earth on an unseasonably warm mid-March morning. After about an hour of walking, the trail reaches Avalanche Pass, which is pinched between a pair of sheer cliff faces, and then Avalanche Lake, where I watch chunks of ice calve off the mountainside and rocket earthward with thunderous echoes. Nine kilometres in, I'm sitting in the sun on the shore of frozen Lake Colden eating a sandwich, wearing a T-shirt, wondering why I bothered bringing snowshoes.

Then I begin the ascent: a 2.7-kilometre slog that gains 716 metres of vertical, with angles approaching 50 degrees, snaking along and atop a creek, in increasingly deep snow. About a quarter of the way up, when I crash through the crust and sink waist deep into the snow (and ankle deep into water) I realize it's time to put on the snowshoes. And when I finally huff and puff onto the wide-open saddle below 1,558-metre high Algonquin Peak, I quickly put on my jacket and tuque to stop myself from shivering in the stiff wind.

At the top, a white-haired man scanning the stunning 360-degree panorama with his binoculars tells me that Algonquin is the 31st of the 46 Adirondack High Peaks that he has summited – bagging all of these mountains, apparently, is a goal for regular visitors. Then he asks how many I've done (one) and which route I took.

"Manly," he responds when I point toward the gully that leads to Lake Colden.

"Manly," he repeats. "That's one of the steepest trails around."

When I ask why he wants to climb all 46 High Peaks, he pauses, then says, "because they're there, I guess." Which, I suppose, is why I took the steep approach. And why I'm thinking about my next summit push.

Lake Placid (lakeplacid.com) is a five-hour drive east of Toronto, three hours southeast of Ottawa and two hours south of Montreal. The attractive lakeside village, which has hosted a pair of Winter Olympics (in 1932 and 1980), is crammed with restaurants, bars and boutiques, and has many accommodation options.

Try the central and comfortable High Peaks Resort, which is attached to the lively (and tasty) Dancing Bears Restaurant (rates from $130 (U.S.), highpeaksresort.com). The Crowne Plaza Resort is home to a tremendous lounge and large indoor pool/hot tub area (rates from $100, lakeplacidcp.com).

Winter activities in the area include cross-country skiing on the trails at Mt. Van Hoevenberg (whiteface.com/activities/cross-country-skiing), the Cascade Cross Country Center (cascadeski.com) or half a dozen other X-C networks nearby. While at Mt. Van Hoevenberg, stop by the Olympic Sports Complex to test your nerves with a bobsled, luge or skeleton ride (rates range from $65 to $80 per slide, or $120 for a two-sport combo). Or sign up for a biathlon lesson ($55), which includes sessions on skis and at the shooting range. There's downhill skiing at Whiteface Mountain which boasts North America's highest vertical east of the Rockies. Visitors can also take a tour and watch skiers soar at the Olympic Jumping Complex, glide around the village's outdoor speed-skating oval, or choose from among dozens of snowshoe and backcountry ski trails in the High Peaks wilderness. visitadirondacks.com

Dan Rubinstein is the managing editor of Canadian Geographic. He stayed as a guest of the High Peaks Resort. The resort did not review or approve this story. 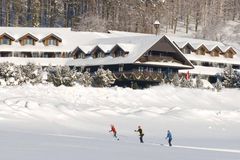 Where celebrities go to heli-ski: Could you handle the Mike Wiegele B.C. mountains?
May 11, 2018 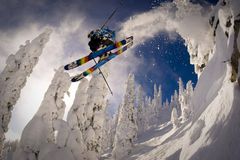 Would you dare to slide on Whistler's Olympic luge track?
May 2, 2018 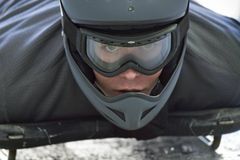