Skip to main content
Joanne Will
Special to The Globe and Mail
Published August 18, 2016

Seven decades ago, Joanne Will’s grandparents crossed the Atlantic – one as a soldier reporting for duty, the other as a war bride. Now, she takes the trip in reverse aboard the newly refurbished Queen Mary 2 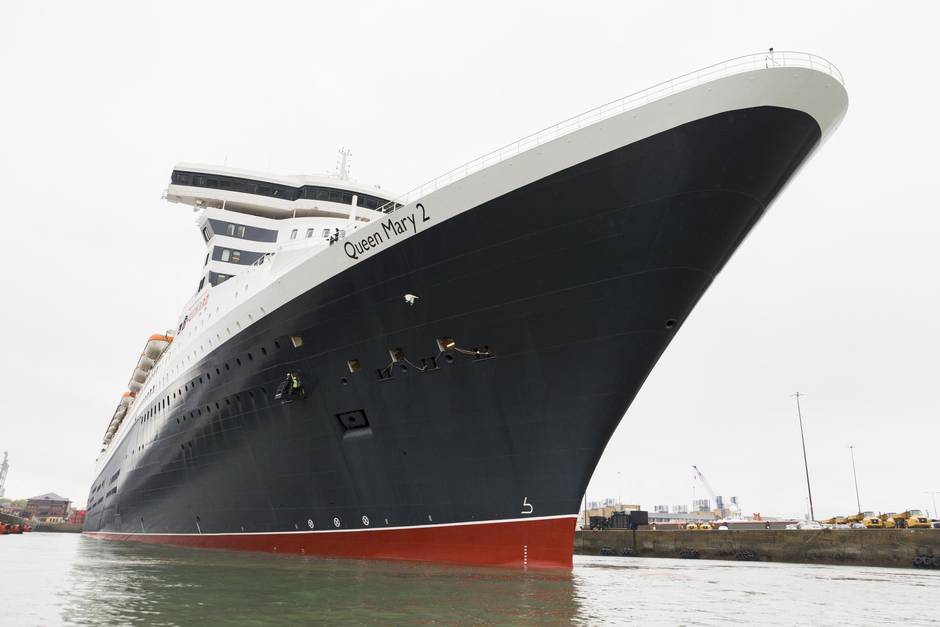 Standing at Pier 21 in Halifax, I’m gazing up at the majestic Queen Mary 2 from the same spot where my grandmother, a British war bride, completed her transatlantic crossing and arrived in Canada to begin a new life 70 years ago.

This ship will be my home for the next week as I retrace her journey, albeit in reverse. Her 1946 crossing on what was then a virtual highway of the seas was aboard the Ile de France, which met a rather undignified end as a prop in the 1960 disaster movie The Last Voyage. Today the Queen Mary 2 is the only passenger vessel regularly crossing the North Atlantic.

Launched in 2004 and refitted in 2016, the Queen Mary 2 is also the rightful heir to the “golden age” of ocean travel, which began in the 1880s and started to wind down in the 1950s when commercial transatlantic passenger flights took off.

QM2 is not a “cruise ship.” She is, in fact, given her hull design and propulsion system, the last “ocean liner,” replacing her predecessors Queen Elizabeth 2 – which was decommissioned in 2008 – and the original Queen Mary – decommissioned in 1967.

I join the ship in Halifax, its only scheduled port of call after leaving New York. From here on, there are no stops along the 3,000 nautical miles of open ocean to Southampton, England. Yet points of interest abound in the murky deep. Daily bridge announcements call out the nearby final resting sites of RMS Titanic and RMS Lusitania, as well as the vast underwater plateaus known as the Grand Banks of Newfoundland, and the Flemish Cap, an area rich in marine life brought to recent popular attention by George Clooney in The Perfect Storm. 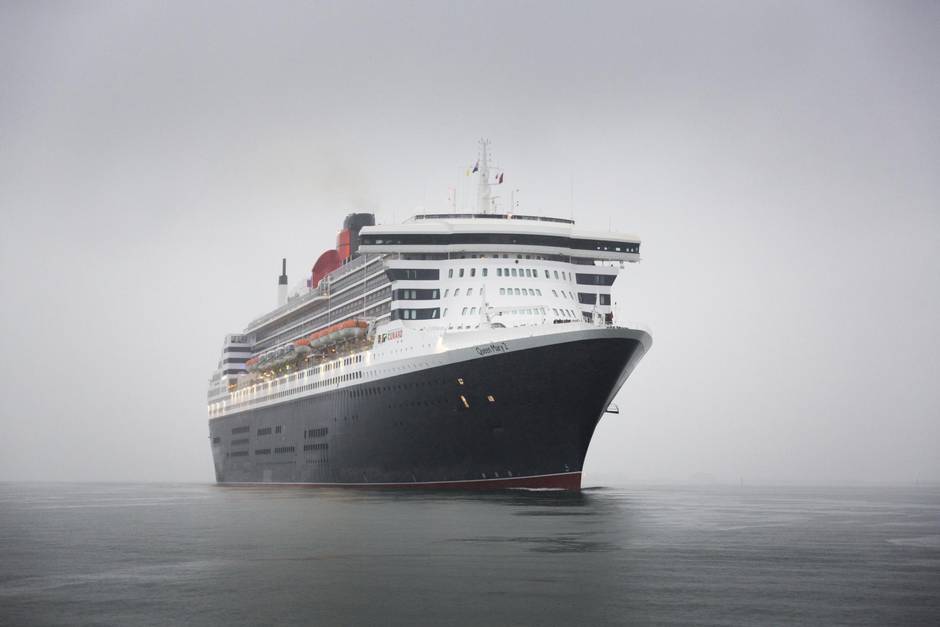 The refurbished Queen Mary 2 as it sails into port. (Christopher Ison)

My grandfather, a Canadian flying officer stationed in Yorkshire during the Second World War also travelled this route on the Cunard Line’s original Queen Mary. In May 1945, just one week after my grandparents were married, he was swiftly shipped home to Halifax to prepare for the war in the Pacific. He sent the shillings he won playing cards on board to his new bride in England, who had to wait nearly a year before she could secure a berth and join him.

My grandmother, who served four years in the British Army and endured the Blitz, was not alone in taking this journey. From 1941 to 1948, upwards of 44,000 war brides and their 21,000 children emigrated to Canada in the wake of a war in which romance flourished between locals and soldiers stationed overseas. The original Queen Mary carried almost 10,000 of these war brides and children from the U.K. to Canada, and even more to the United States.

As I stroll the QM2 decks, looking out across the characteristically grey North Atlantic, I try to imagine the anticipation my grandmother felt when she made the journey to join a husband she barely knew, in a land she had never seen. Even today, at age 92, the mix of excitement and sadness are fresh as she recalls leaving behind her parents and sister to reunite with her new husband. 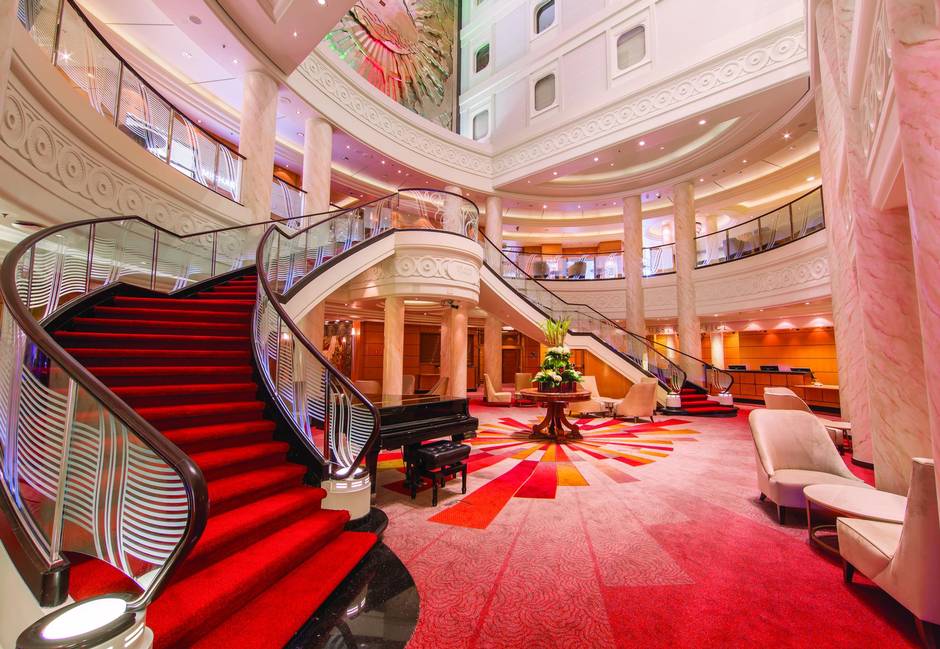 The Queen Mary 2 is a modern piece of transportation technology. (Greywolf Studios Limited)

“When we left Southampton, just as the ship was pulling out, a whole orchestra in uniform came to the dock and started playing Will Ye No Come Back Again. We were all excited to go to Canada, but suddenly it felt so emotional, the way they played it. We were all pretty tough, but that just broke us down. There wasn’t a dry eye. I thought, ‘Gee, that’s right – I’ll never come back here.’ And the other women, too, said, ‘What if I never come back? Have I made a mistake?’”

My crossing lasts six nights, as did hers. I experience none of the incessant mal de mer she recalls: the voyage is a softer one with calmer seas and 21st-century technology, including, among many engineering marvels, three Rolls Royce bow thrusters, two matching pairs of retractable stabilizing fins, and engines that could power the city of Southampton.

On this crossing, there is plenty to do. The QM2 boasts the largest ballroom and library at sea, and the only planetarium. Her elegant promenade deck, lined with matching teak steamer chairs, is abuzz from dawn to dusk with walkers and joggers – two circumnavigations of the deck equals one kilometre. 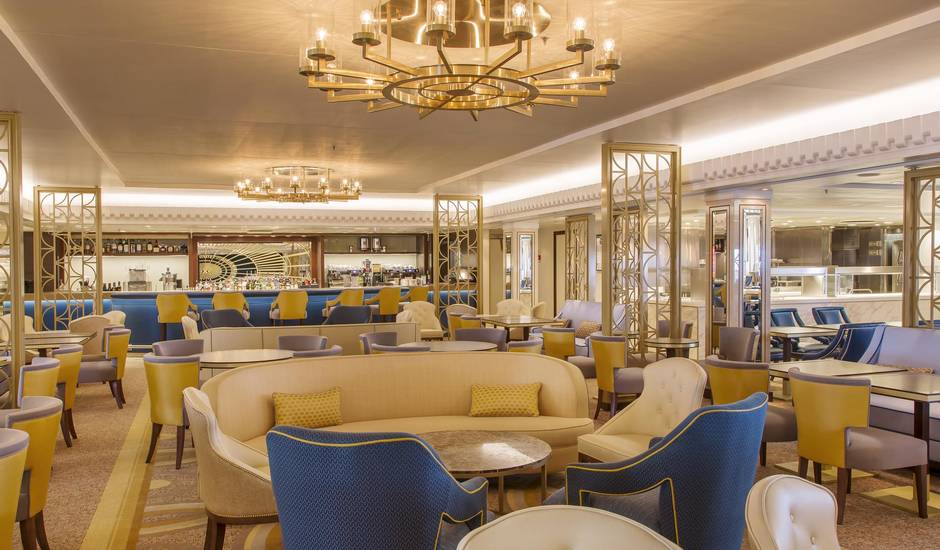 In addition to the largest wine cellar at sea (450 fine wines), one shipboard lounge contains an impressive collection of port – 46 vintages – beginning with 1840, the year Halifax-born Sir Samuel Cunard saw his first steamship sail from Liverpool to Halifax and Boston.

The optional formal dinners, masquerade ball, afternoon tea and captain’s and senior officer’s cocktail parties are long-held transatlantic traditions – as are the daily array of lectures (this trip by New York Times journalists and a retired general) and theatrical entertainment. On this crossing, London’s Royal Academy of Dramatic Art stages abridged versions of Shakespeare and Jane Austen, a comical overview of Cunard’s 176-year history, an evening of ghost stories, and improv workshops.

But it was not so on my grandmother’s trip. “There wasn’t much frivolity on my ship,” she recalls. “There were plenty of men if you could dance but they didn’t really want that to happen and tried to keep us segregated. We could see them if we walked on the promenade, but we were in different parts of the ship.”

Then and now, there is a purpose to this trip, and that is to cross the Atlantic. Some of the 2,593 passengers, 15 dogs, and 3 cats (the ship is the only ocean liner that allows pets) are making their dozenth crossing; some their first. Some are here because they detest air travel, while others simply enjoy the slow pace of the journey, the opportunity to disconnect, and the ability to avoid jet lag with clocks that gently advance one hour each day. 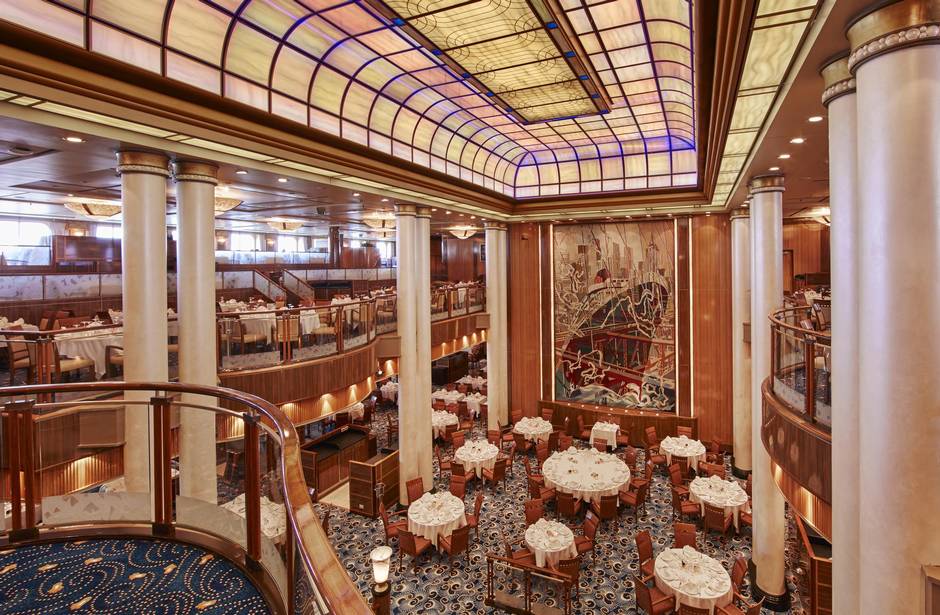 Indeed, many people continue to live their regular lives onboard with opportunities for religious services, reading, card games and a fitness centre. You can keep in touch with the outside world via Internet, although, thankfully, it’s slow and expensive.

“What we’re selling is the opportunity to move away from the rat race, unplug and recharge the batteries,” says QM2 Captain Christopher Wells, leaning on a bridge wing console. “Many people come from America to Europe to see what their families experienced. Yes, we bring the memories and we’re very proud of the heritage we have, but it doesn’t need to be old-fashioned. This ship is a modern piece of technology to keep us going for the next generations.”

It’s this contrasting mix of the nostalgic and modern that draws me.

For my grandmother, it was all about getting to Canada and her new life. As she approached Halifax harbour in April, 1946, she and the other war brides helped each other prepare for arrival. They couldn’t wait to disembark and reunite with their husbands in this new world. 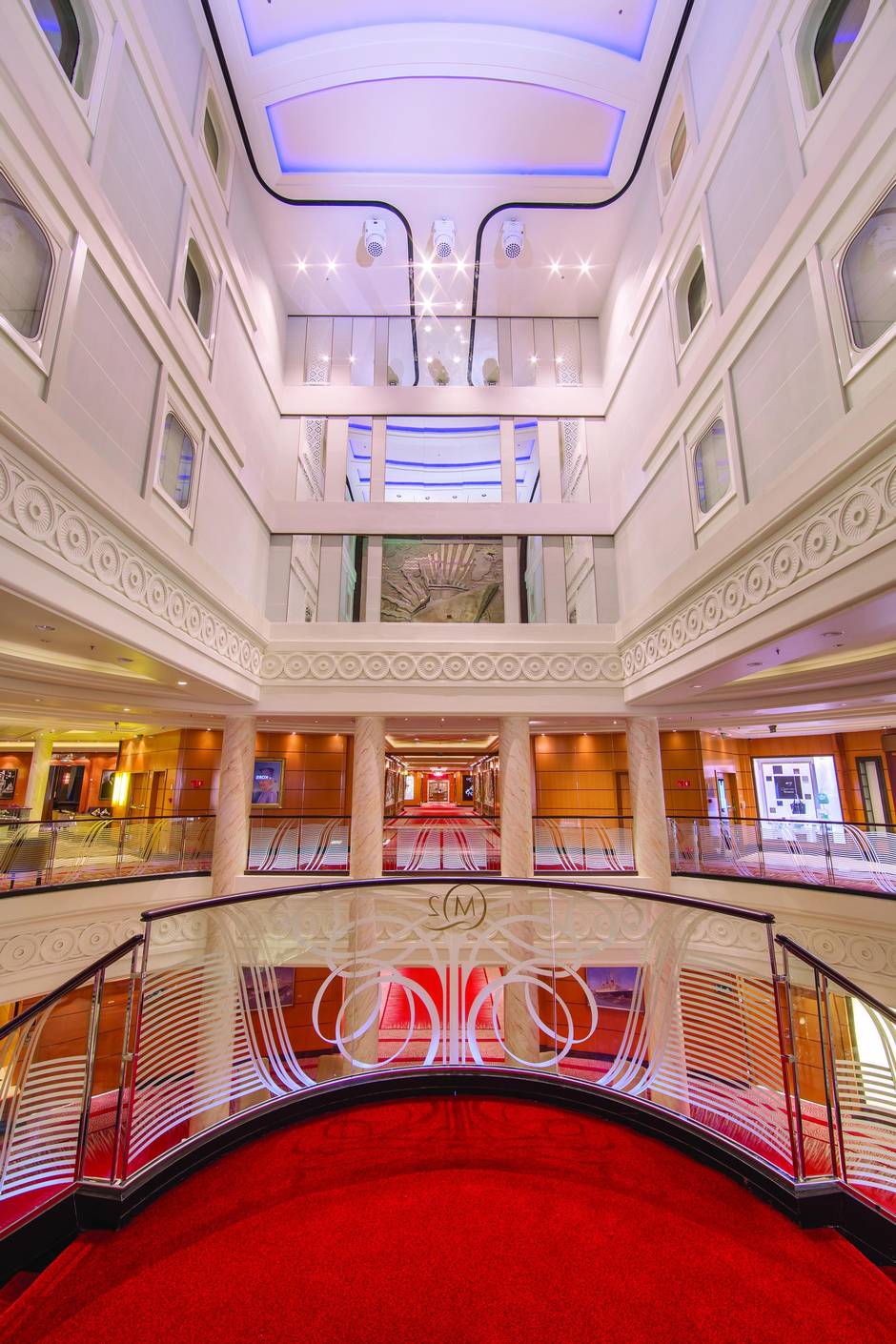 The atrium of the remastered Queen Mary 2. (Greywolf Studios Limited)

“You could feel the anticipation in the air. As Halifax came into view, I couldn’t believe the white houses. I was from an English mill town, and during the war it was dirty and blackened with soot. We all thought the Halifax houses were whitewashed by the sea, and we later learned it was white paint,” she says.

Unlike my grandmother, I’m not filled with joy as the QM2 approaches the port of Southampton. I’m longing for another walk around the promenade deck, a breakfast with fellow “Cunardists” describing voyages past, or a formal dinner watching adults and children alike, bursting with excitement over dolphin and whale sightings.

This journey has helped me understand and feel closer to my grandmother. We both experienced an inner peace, mirroring the gentle swells of the sea: her for the beginning of her married life; me for the opportunity to step back in time, disconnect from the bustle of our harried technological world, and connect in a deeper way to the awe I feel for her courage. Had she not made the journey, this story would be unwritten. 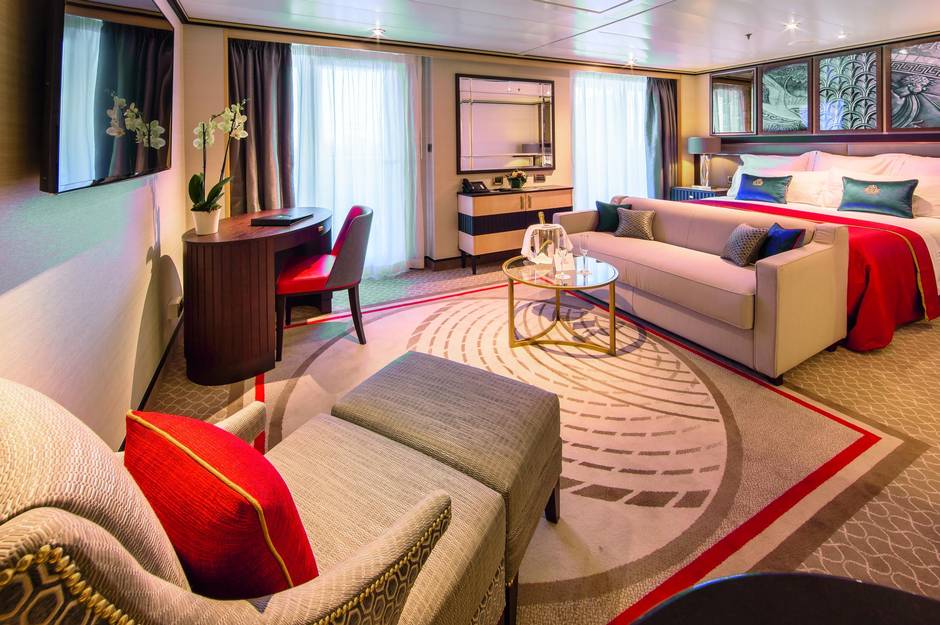 Transatlantic crossings on the Queen Mary 2 start at $719 a person for an inside cabin (special introductory fare; rate includes all meals at the main restaurant, buffet and 24-hour room service).

The writer travelled as a guest of Cunard Line. It did not review or approve this article.