The salmon are coming. The chinook, coho, sockeye, pink and chum cannot help it. It’s coded in their DNA and nothing will stop millions of them from heading back from the salty depths of the Pacific Ocean near Alaska and Russia, where they’ve been feeding and growing for the past few years, to the freshwater rivers of British Columbia and Washington State, where they were born. Well, almost nothing.

As they near Langara Island in northern British Columbia’s Haida Gwaii chain of islands, formerly the Queen Charlotte Islands, something is waiting for them: me.

Or at least I will be once I stop heaving over the side of a pitching 29-foot Boston Whaler that took me out the first day I got to the West Coast Fishing Club (WCFC). 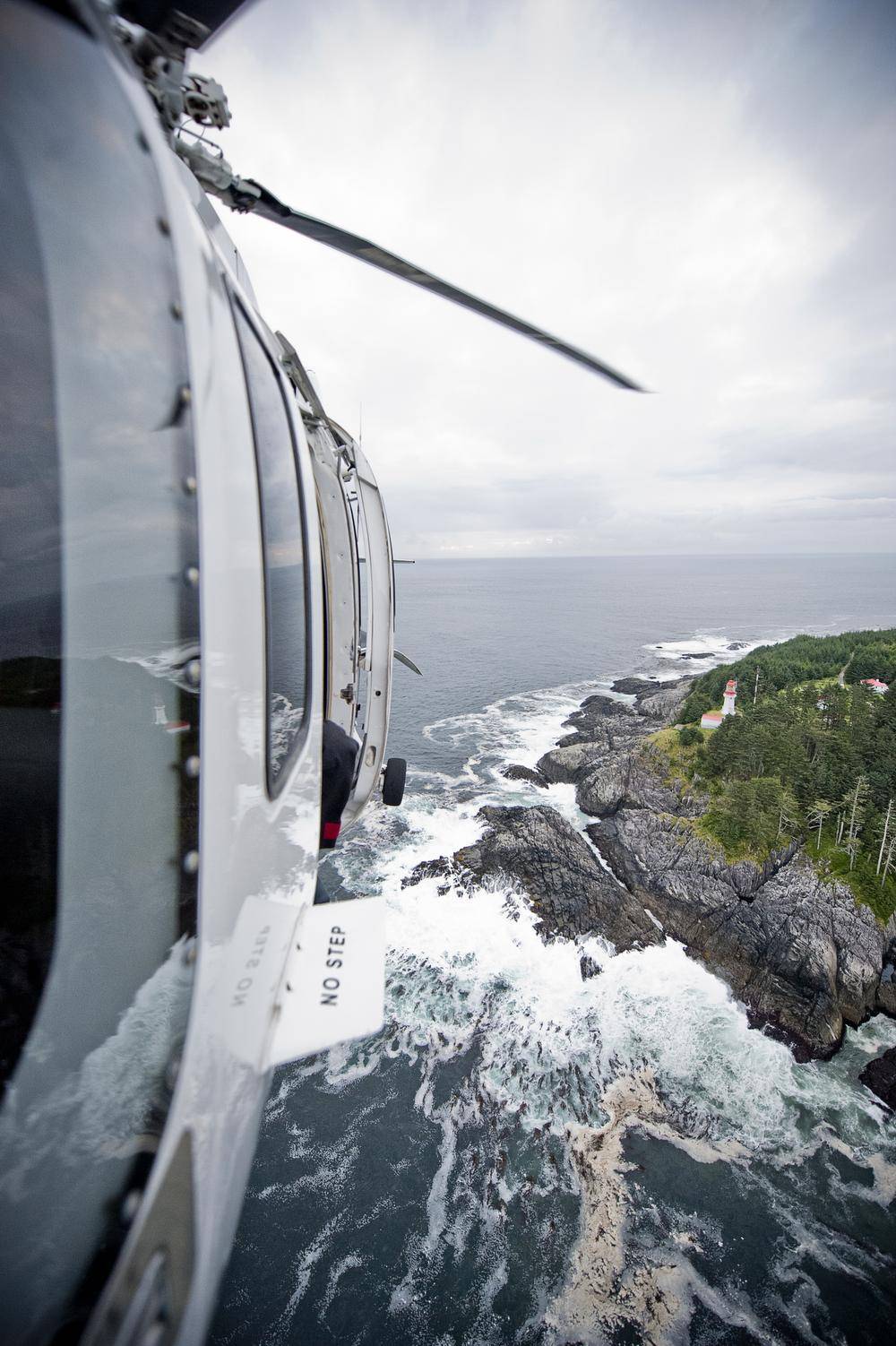 Earlier that day, it was clear I stood out from most of the 40 or so other passengers in the Dash 8 whirring its way to Masset, a Haida village two hours north of Vancouver. First: I was one of five women (and therefore not part of a father/son adventure). Second: I was not a Bay or Wall Street exec. Third, and most importantly: I was not sporting a transdermal scopolamine patch behind my ear (the seasickness remedy takes 24 hours to work and the experienced stick it on the day before the journey).

It was a rookie mistake, but then again I’d never caught fish from a boat; all my fishing adventures had taken place from the safety of land. My partner, Lucien, however, didn’t even need it; he’d been a guide on Great Bear Lake and has fished all over the country, including for salmon on the Campbell River. He’d always talked about it with religious fervour and I wanted to understand the lure of catching salmon on the ocean. This was finally my chance. 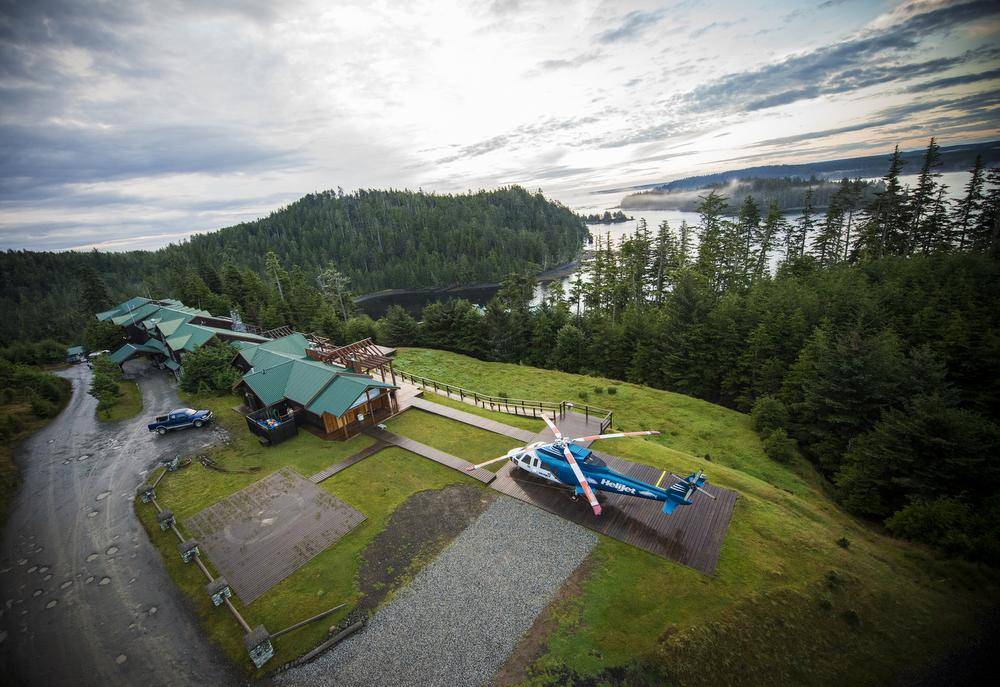 But as the plane made its descent, I had a what am-I-doing here moment. That quickly changed into an I-can’t-believe-I’m-here moment during the exhilarating 25-minute helicopter ride from Masset to Langara Island. Even through the incessant rain, the raw beauty of the more than 150 islands that comprise Haida Gwaii was unmistakable. Partly shrouded in mist, the ancient trees of the West Coast rain forest – red cedar, Sitka spruce, western hemlock and red alder – rose like cathedral columns against the horizon, while below the Pacific churned a dark slate grey.

Twenty-five minutes later we landed at the Clubhouse, one of three lodges owned by the WCFC. Through the mist, a screeching bald eagle flew by, followed quickly by another. And another.

Built over 25 years by co-founders Rick Grange and Brian Legge, the luxury lodge holds its own against the natural wonder of the land with touches such as Haida totem poles, chandeliers custom-designed in Montreal and Adirondack chairs from Muskoka. There are two main communal spaces – one has a custom-built keg and a pool table – as well as the dining room, where we were served the noon orientation brunch. There, Terry Cowan, general manager for 10 years, welcomed back previous guests and outlined the basics for newcomers: All we had to do was ask and, like genies, the staff would fulfill any of our requests. We could focus all our energy on fishing. 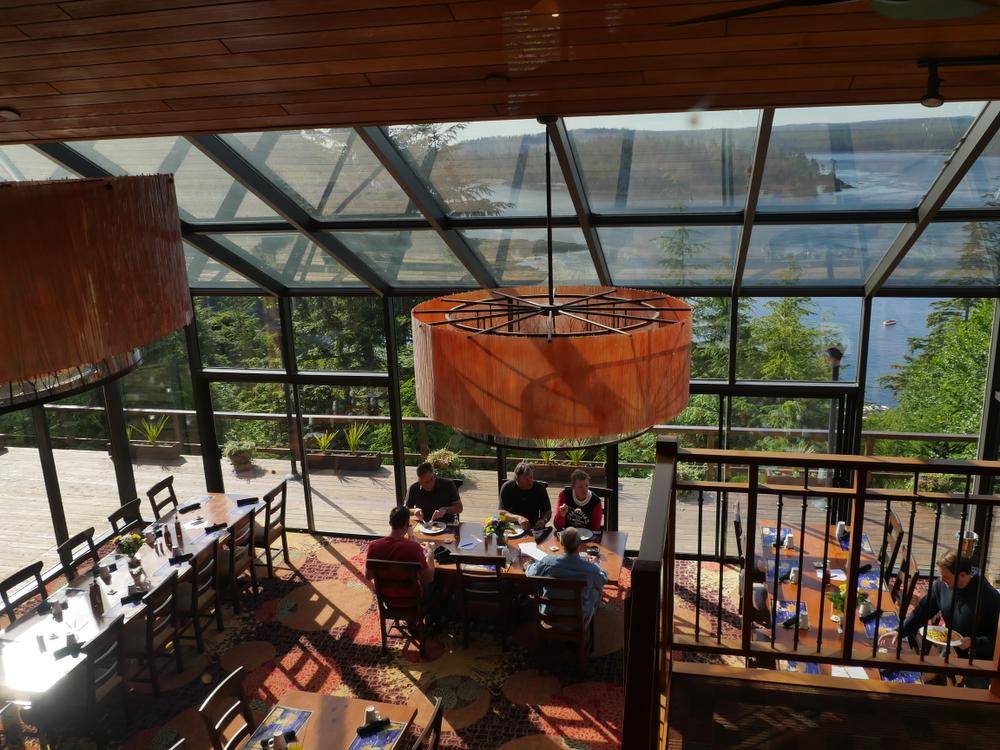 As I savoured Eggs Benedict with shrimp and guacamole, homemade scones and freshly squeezed orange juice, I daydreamed about spending the next few hours testing out the hospitality. Instead, Lucien interrupted my reverie: “We’re the last ones here and need to get moving. It’s time to fish.”

I looked around and realized that everyone had headed out into the steady rain and mist. Clearly, the leather couches and hot tub would have to wait.

I downed a couple of ginger Gravol and headed down to the docks. 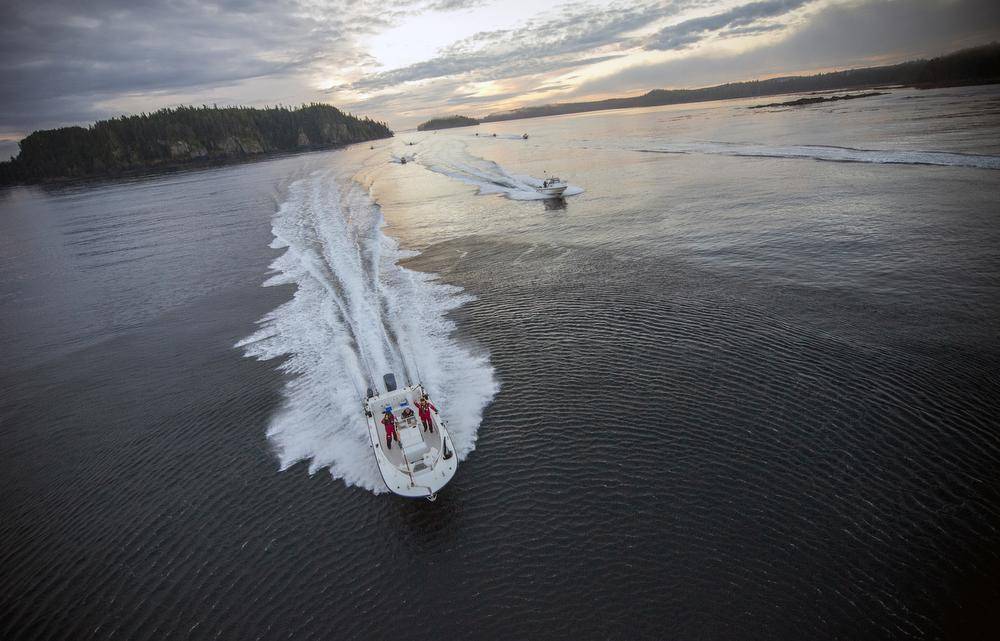 Our guide, 21-year-old Kai White, was waiting on the Boston Whaler, which was equipped with Lowrance fish finders, two Scotty downriggers and five Shimano Technium rods with Islander reels. Clearly, the WCFC was going to do everything it could to ensure I would catch a fish.

Unfortunately, my stomach was not on the same page. Despite Kai’s advice to stare at the horizon, within an hour the unforgiving Pacific was doing funny things to my innards.

A pod of humpbacks made its appearance and for a while their majesty made me forget about the giant swells rocking the boat. Suddenly an odour filled the air; it reminded me of a hot afternoon at a fish market. “What is that?” I asked. “Whale breath,” Kai replied.

After another hour, I had to pack it in. Kai agreed. “You look green. There’s no point in being miserable.”

“Let’s try again tomorrow,” Lucien said. I think I went an even-deeper shade of green at that suggestion. 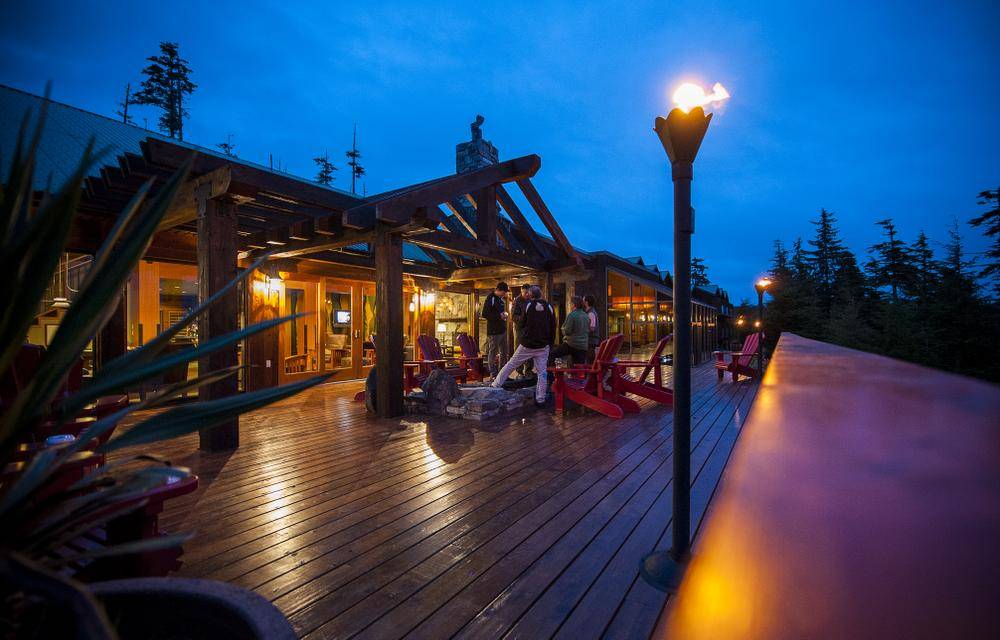 Back on land, I was given a transdermal patch and told to relax on the leather couch by the fire while I was plied with mint tea and crackers. The others began to straggle in and soon the communal areas buzzed with storytelling – an essential part of a true fishing adventure. Some were tales about the day (I was pleased to learn that others had also found it rough out there) and some were about past glory catches at the lodge. As I listened, I realized that I had a story to share as well, about the struggle of the catch and the hope that the big one would bite tomorrow.

After a five-course dinner, a hot shower and a good night’s sleep, I was determined to head out again. It helped that the Pacific had calmed down. Kai loaded up the barbless hooks with herring bait, and attached the lines to the downrigger to give it a weight that would take it down deep.

Then we waited. I was able to relax and enjoy the aerial acrobatics of the bald eagles and the raucous calls of the ravens watching from the trees. On a rock jutting out into the ocean, 600-pound sea lions – too huge to catch agile salmon – sunned their blond masses. They were ugly-cute. 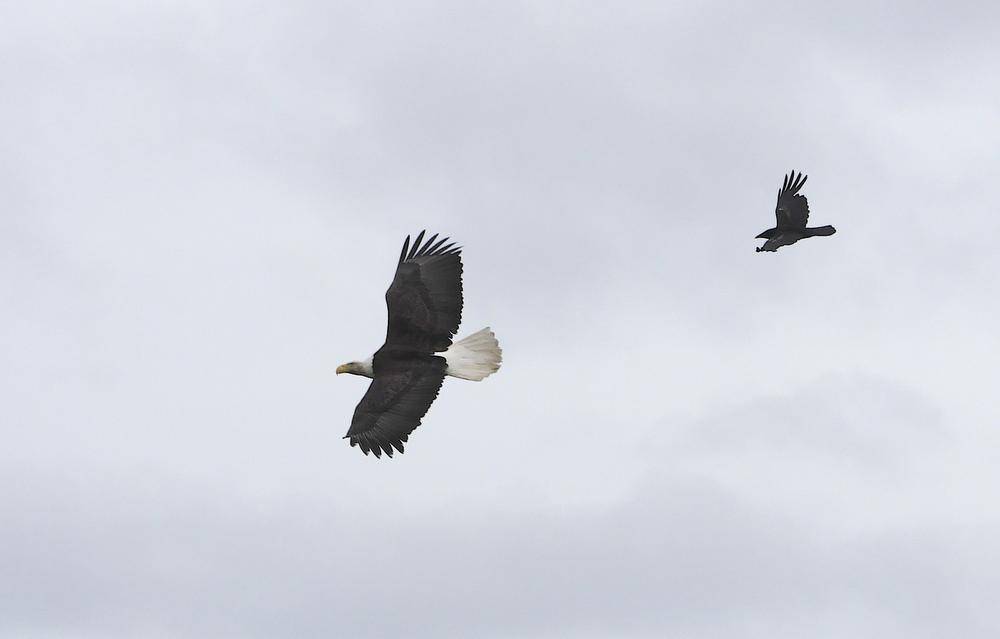 “You’ve got a bite on your line,” Kai suddenly said.

What? I grabbed it and started to “Reel, reel, reel,” as he instructed. The downrigger unclipped the weight that held the bait and now it was just the fish on the line. I struggled to keep the rod tip up so that it would bear the brunt of the chinook. As the fish began to run, I let go of the reel and it started to spin as it dove deep to try and get away. When the line went slack, I started reeling again. And on it went. Reel in fast and bring the fish close. Keep rod tip up. Let the fish run and watch the line. Reel again. Tire it out. I felt my instincts kick in. I wanted this fish and I was willing to fight. It was beautiful, strong, athletic and I understood that it was up for the battle as well: Every time I thought it was tired, it would dive for another epic run. It took me 25 minutes to get the 21-pound chinook to the boat. I was exhausted and shaking with adrenalin, but I’d never felt such awe and respect for a fish. 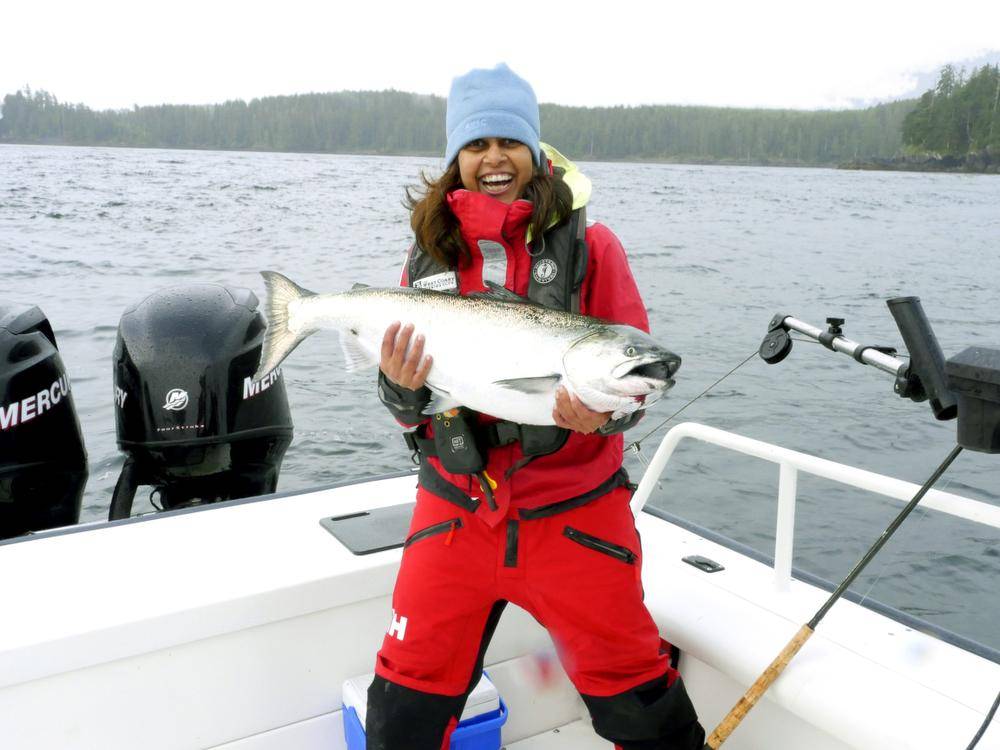 I caught more fish after that, including chinook (one almost hit the 25-pound mark – like any good angler, I now round up), coho and halibut. I even had a sea lion steal a coho. I’d been fascinated by the leaps of the coho on my line when I heard Kai scream out the warning: “There’s a sea lion coming for your fish.” He spun the boat around and attempted to spool more line so that the fish could swim away. But it was hopeless; the salmon was too tired. The thief’s massive head surfaced and I yelled in anger, “My fish, my fish, get away from my fish,” just as his maw opened. I was left with a coho head and a burning desire for a harpoon.

On the last day, as the “candy boat” – the Clubhouse sends out food and drink to guests on the water – came by with prawn and scallop skewers and white wine, I was satisfied that I had plenty of tales. And isn’t that the point of any good fishing adventure? 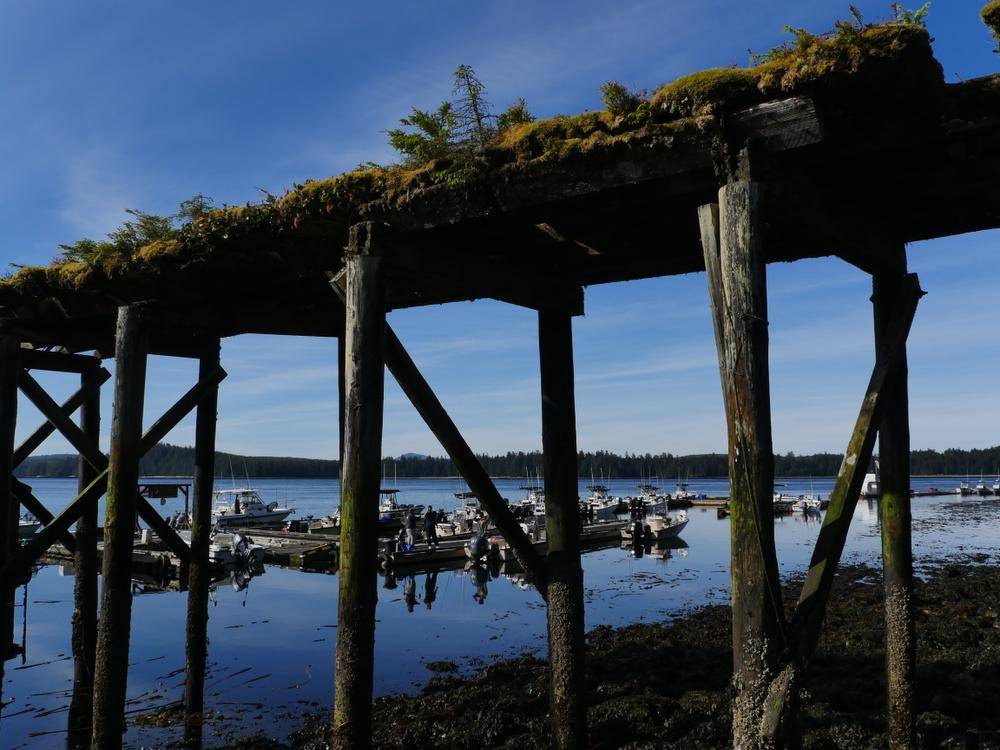 The 35,000-square-feet Clubhouse on Langara Island is one of three lodges owned by the West Coast Fishing Club. The North Island Lodge is also based on Langara Island, while the Outpost is in the even-more remote Port Louis, on the west coast of Graham Island. Guests have included the entire roster of the Vancouver Canucks, as well as top executives from Wall Street and Bay Street.

Everything you could possibly/need want for a successful fishing trip is included: Helly Hansen all-weather suits, boots and inflatable life jackets are all hung on personalized hooks in a heated gear room. At any point, you can grab provisions from a pantry well stocked with candy, chips, nuts, sandwiches, fruit and coffee. 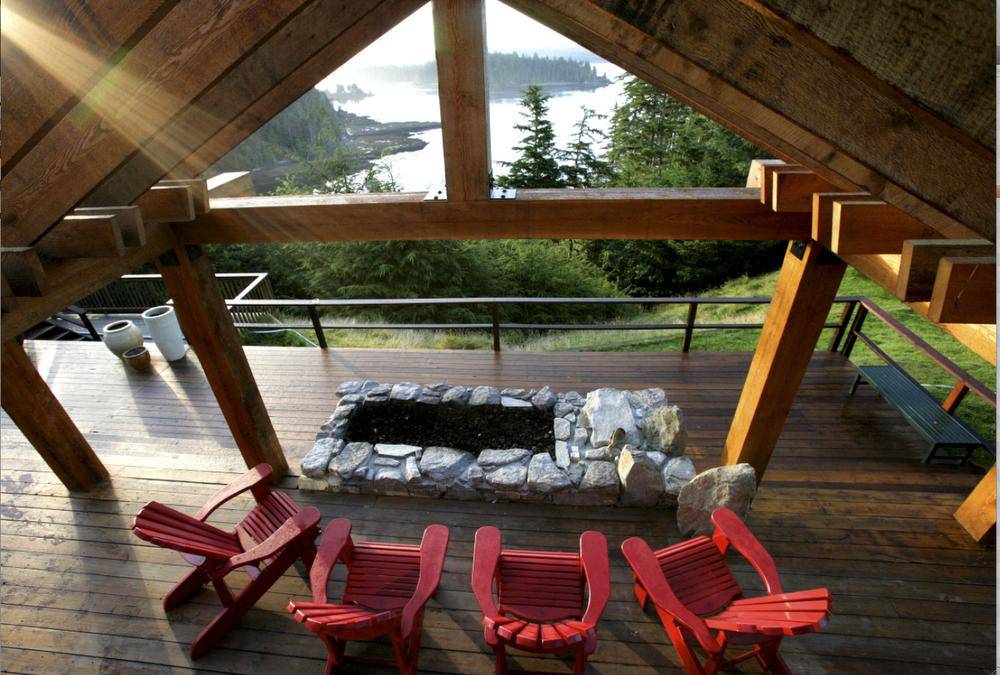 With an eye to conservation, guests are encouraged to release tyees (an aboriginal word meaning “chief,” it refers to salmon more than 30 pounds) back into the ecosystem in exchange for rewards such as Haida prints, Arcteryx jackets and Islander fish reels. For those who do take home salmon or halibut, the lodge cleans, flash freezes and vacuum packs fish for travel; it also forwards fish to processors for smoking or canning.

There are two options for visits: four days and three nights, or five days and four nights. Prices start at $4,500 for self-guided stays and can go up to $7,300 for top-end packages. Included in the price are flights from Vancouver to Masset (a Haida village), and a helicopter ride from there to Langara Island. Not included are fishing licences, taxes, gratuities and fish processing.

The season runs from May to September. 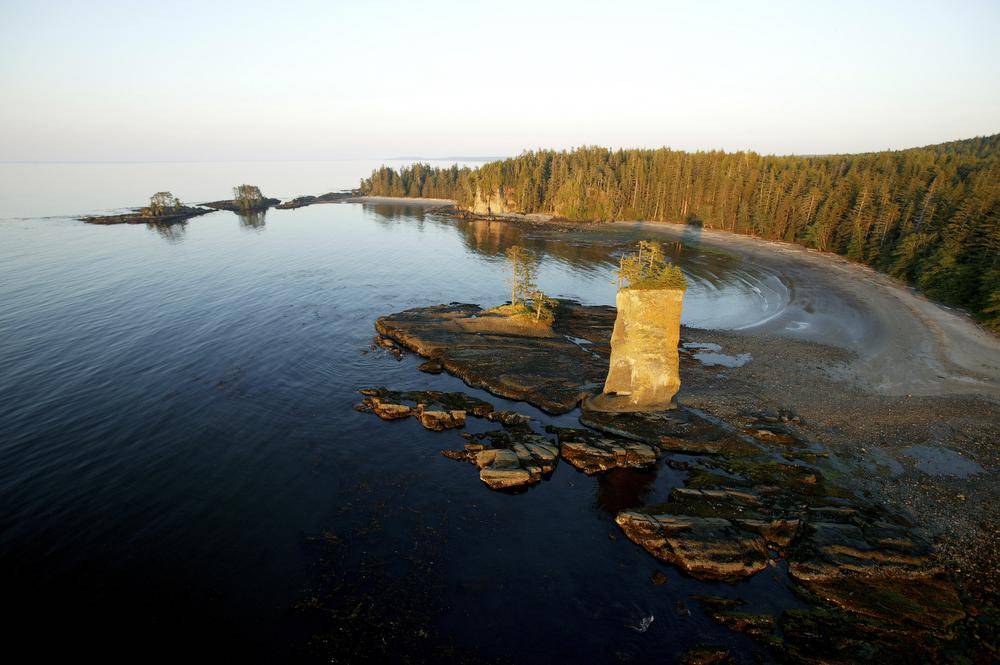 The writer travelled courtesy of the West Coast Fishing Club. It did not review or approve this article.