My personal approach to winter is to hunker near a fireplace with a fortifying drink or three. But if you suffer from itchy feet at this time of year, Canada is stuffed like a bulging Christmas stocking with tempting, ski-avoiding options.

Let's start with the parties. Quebec City's mammoth Winter Carnival (carnaval.qc.ca) should be on every ice bucket list, especially if you love snow sculptures, night parades and frozen balls (not what you think). Add a sleepover just outside the city at the Hôtel de Glace – opens Jan. 5 – (hoteldeglace-canada.com) for the full fleece-clad effect.

Alternatively, commune with the winter wonderland from a cozy train seat. VIA Rail's Vancouver to Jasper route slides between grand snow-capped peaks, but I also love the less-crowded Jasper to Prince Rupert service, where ice-draped forests and frozen lakes appeal. See viarail.ca/offers for possible ticket deals.

You could also hop VIA's Winnipeg to Churchill train for some aurora-spotting. The Northern Lights are a winter must-do and Canada has some ideal viewing destinations. If you're Manitoba-bound, check out the trip-planning resources at everythingchurchill.com – or face plant into a cool Northwest Territories visit instead.

Flying into Yellowknife, you can marvel at aurora-streaked skies from rustic cabins; explore the hauntingly silent backcountry via snowmobile or meet chilled locals on guided city tours. See spectacularnwt.com for ideas. Alternatively, if you're nearer Ontario's Algonquin Park, Voyaguer Quest (voyageurquest.com) organizes everything from dogsledding weekends to Stew and Brew culinary retreats.

If you really want to connect with the wintery locals, though, hit the ice. Skating Ottawa's Rideau Canal is a Canadian rite of passage, of course, but you can also hone those triple Salchows on Winnipeg's huge Red River Mutual Trail (theforks.com/rivertrail). Combine with the city's annual Festival du Voyageur for a complete wintery vacation (festivalvoyageur.mb.ca).

Or you could skate across to the Canadian National Pond Hockey Championships (canadapondhockey.ca) in Huntsville, Ont., where hundreds of teams compete on 28 al fresco surfaces. Watch others work up a sweat at the upcoming Canada Winter Games (canadagames2015.ca) in B.C.'s Prince George. The puck drops on 2,400 athletes on Feb. 13 – add the city's Coldsnap (coldsnapfestival.com) music fest to keep things toasty.

But if you're not into all this bone-chilling outdoor exposure, cocoon yourself in a decadent hotel instead – preferably a spa-equipped one. Gazing at scenic snowfalls from the windows of castellated Fairmont favourites such as Banff Springs or Château Frontenac is arguably the best way to experience winter. For seasonal room deals, visit fairmont.com/winter.

On the other side of Vancouver Island, Tofino also makes a virtue of the face-whipping winter tempests that can lash the area. Stormwatching here means donning thick waterproofs and facing down salt-licked maelstroms on deserted beaches – then scampering to your hotel room for a hot-chocolate embrace.

But if you need a knees-up to raise your temperature, consider celebrating New Year's in a different Canadian city. Events of all sizes dot the country like a string of fairy lights, but Halifax (halifax.ca/NewYearsEve) wins in the party-throwing stakes. Peel off your fleece at the free concert and giant fireworks finale – and expect to make hundreds of new friends to keep you smiling until spring. 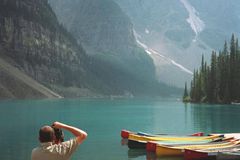 The hotel reno that revamped a Canadian icon
September 15, 2014
Follow us on Twitter @globeandmail Opens in a new window
Report an error Editorial code of conduct
Due to technical reasons, we have temporarily removed commenting from our articles. We hope to have this fixed soon. Thank you for your patience. If you are looking to give feedback on our new site, please send it along to feedback@globeandmail.com. If you want to write a letter to the editor, please forward to letters@globeandmail.com.
Comments