The Ray-Bans are on because I need them to swagger, but also because the day is as bright as white and the DayGlo colours of Port Lucaya Marketplace are so in-your-face cheerful. If I could dance, I probably would, to Bob Marley's One Love blasting from unseen speakers over the open-air plaza, where low-end souvenir kiosks compete for tourist dollars with high-end jewellery shops, and casual pubs share washrooms with the fine-dining restaurant next door.

"First time on the island, ma'am?" a vendor named Carly asks as she searches through piles of T-shirts on a small table in front of her stall. My 10-year-old son is looking for a Marley shirt, so Carly shows him a grey one with the legend's likeness and the words "The more people smoke herb, the more Babylon fall" printed on the back.

"Oh, your teachers will love that," I tell my son. Carly refolds the T-shirt and puts it back on the table.

It's my third visit to Grand Bahama, a little island with such a big sounding name. Stretching 154 kilometres west to east and up to 27 kilometres north to south, Grand Bahama - one of 700 islands that make up the Commonwealth of the Bahamas - is a narrow curve of terra firma on the Caribbean Sea in the North Atlantic Ocean.

I worried for Grand Bahama for a couple of hours in January when, along with other islands in the Caribbean, it was put on tsunami alert after a 7.0-magnitude earthquake demolished entire communities and killed thousands of people in Haiti.

"We just prayed and hoped that nothing would happen," Carly recalls, noting that the Grand Bahamian authorities made no attempt to evacuate the island. She turns away for a few seconds to invite a passing tourist to her stall - "Hey handsome, come inside and take a look, sweetie pie" - then resumes her story after "handsome" walks away with a head shake and a smile.

"But, thanks to God, nothing happened, because we had enough disasters here already."

Indeed, after a triad of windy ladies - namely, Hurricanes Frances, Jeanne and Wilma - hit the island in 2004 and 2005, Grand Bahama was left struggling to put itself together again. Hurricane Wilma, in particular, had hit hard, flooding and ripping the roofs off hundreds of houses, and forcing major hotels, shopping centres and a couple of the island's golf courses to close.

All along the coast, trees and utility poles were felled or broken like toothpicks, and coffins in some graveyards were pushed up and left exposed by the receding floodwater.

But today, after five years and millions of dollars spent on repairs and new construction, it really is better again in this part of the Bahamas. Most of the hotels that had closed after Hurricane Wilma have reopened, all four golf courses on the island are in full swing, and a number of new restaurants have fired up their stoves and are serving the kind of cuisine one would expect in New York or Singapore, with prices to match.

And while much of Grand Bahama has changed, its beaches, with sand the colour of antique pearls, have remained as they were before: so gloriously beautiful you'll feel like running along the shore and breaking into a cartwheel.

Yet for all its attractions and all its efforts to draw in tourists, Grand Bahama Island is still something of an undiscovered gem in the Caribbean, stashed away like pirate's loot. Just as it was ignored by Spanish conquerors in the 15th century - that is, after the conquistadors captured the island's approximately 40,000 residents and put them to work in the slave trade - Grand Bahama today is often overlooked by the more than four million tourists who come to the Bahamas each year.

All this means, of course, is more Grand Bahama for me.

At the Radisson Our Lucaya, where we are escaping from January cold, there's plenty of arm-stretching room between the navy-blue cabana lounge chairs lined up neatly along the seven and a half acres of white-sand beach. A few steps away, the Radisson's infinity pool, which snakes through the property like a fluid tendril, is almost empty, save for a pair of bratty, cannonballing kids.

"Hey Mom," the kids - boy and girl twins - greet me as I backstroke my way to the swim-up bar.

There are no Rome- or Paris-style crowds here and the locals - or the natives, as they call themselves - don't have that tourist-weary surliness. Instead, they're generally polite and somewhat sweet. During breakfast at Zorba's, a Greek restaurant with a morning menu that includes bacon, eggs and grits, our server ends each sentence with "baby angel," as in "here you go, baby angel" or "would you like more coffee, baby angel?" I ask a police officer for directions and he addresses me as "Miss" and "young lady." He got that right.

Later that day we drive to Lucayan National Park, a 16-hectare preserve that is home to a forest of pine, tamarind and gumbo-limbo trees, an 11-kilometre-long underwater cave system - believed to be the largest in the world - a mangrove swamp and a beach.

We fork out $5 each and enter the forest, which feels more like a lovely exotic garden. The trees are tall, thin and sparse, so instead of looking up to a canopy of leaves and branches, we can only squint against the bright afternoon sun.

We go down a small spiral staircase and into a cave, where a rail keeps us from slipping off the large rock platform and into the dark waters of the underground freshwater pool. It's not unusual, we're told, to find colonies of bats hanging around in these caves. But today, thankfully, the bats are nowhere to be seen.

Nevertheless, I run out of the cave and get spooked when I realize I'm all alone in the forest.

"Hello?" I call out to my husband and kids. My daughter appears on the trail ahead and runs over to rescue me.

We cross the two-lane highway to the other side of the park and make our way to Gold Rock Beach, whose claim to fame is that it was where Pirates of the Caribbean was filmed. We hike through a mangrove forest.

"Shhhh!" My son stops and points to a hummingbird hovering in front of a flowering tree right next to us.

We climb up to where trees open up to blue sky and pause before crossing the threshold. In low tide, with wavy patterns combed neatly into the white sand and a dome of brown rock sitting like a stoic giant in the waters just off the shore, Gold Rock Beach makes a dramatic entrance into our moment. It is vast beyond our line of sight, stretching out into distances we can only imagine.

If I wanted to, I could close my eyes and just fall away into a dream. But the ocean crashes in and the assertive presence of the white Bahama sun makes me feel suddenly alert - and open to the possibilities of this small, grand island.

My daughter hoots it up and runs for the water. My son breaks into a cartwheel. A crane glides in and joins our private party.

"This is nice," I tell my husband.

Actually, it's more than nice; it's better. 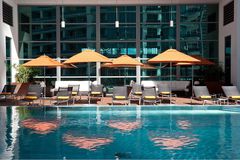 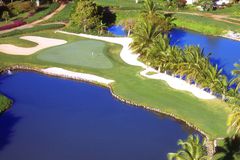