Wearing colourful ski clothing, his long, grey hair tied in a Willie Nelson-styled ponytail, a laid-back local perched on the chairlift in front of us and began swinging his legs rhythmically. A whitish puff of smoke bloomed over his head, then another, and as its trail drifted downwind, we breathed in the sweet, pungent smell of the local “cash crop.” 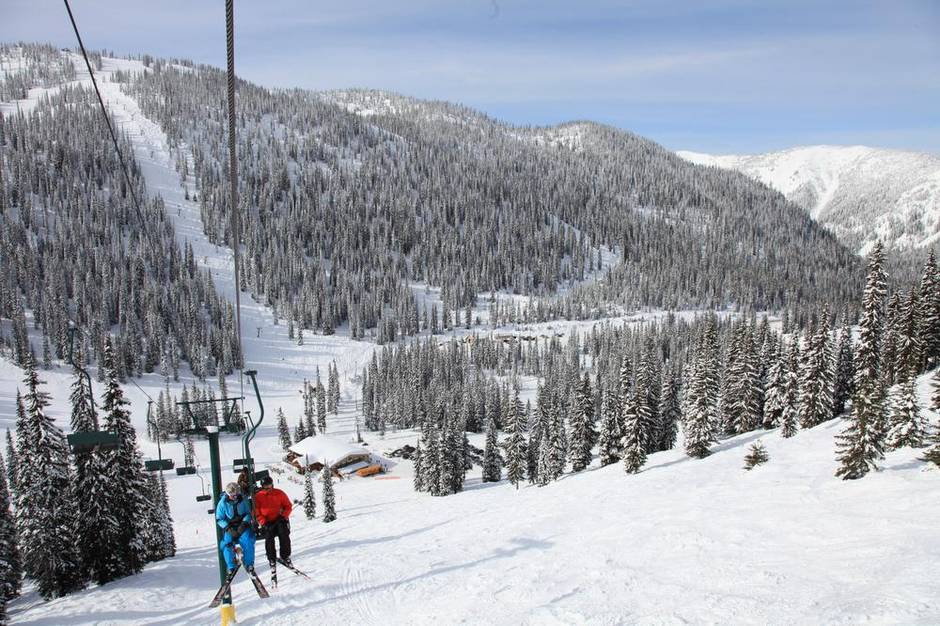 Since none of Whitewater Ski Resort’s three chairlifts are high-speed, it takes a while for the Glory Ridge chair to make its 823-metre climb. Before boarding, we heard the local, who appeared to be in his late 60s, maybe early 70s, tell the lift attendant that he’d just punched his season pass for the 100th time. And now, during the entire way up, he celebrated by moving in tune with the music flowing through his ear buds. We wanted to catch him, get his story – maybe he belonged to the hippie generation of Vietnam War draft dodgers who populated the area. But once up top, he dove seamlessly into a glade run, skis barely whispering as they carved through soft snow and swerved through the trees.

That memory lingers as a snapshot that seemed to say so much about the small city of Nelson, B.C., and its local ski hill.

Tucked reclusively into the Kootenay region of south-central British Columbia, Whitewater remains a veritable secret to many skiers and snowboarders.

Whitewater manages to keep its best-kept-secret status despite receiving an annual 12 metres of dry powder, 479 hectares (1,184 acres) of skiable terrain and the absence of lift lines – all punctuated by a ski-lodge menu that might otherwise be found in a trendy Vancouver restaurant. An easy 20-minute drive from Nelson – although, while irrepressibly scenic, for tourists it is a potentially daunting trip, depending on the weather – the ski hill remains by and large an enviable playground for the locals who like it this way just fine. 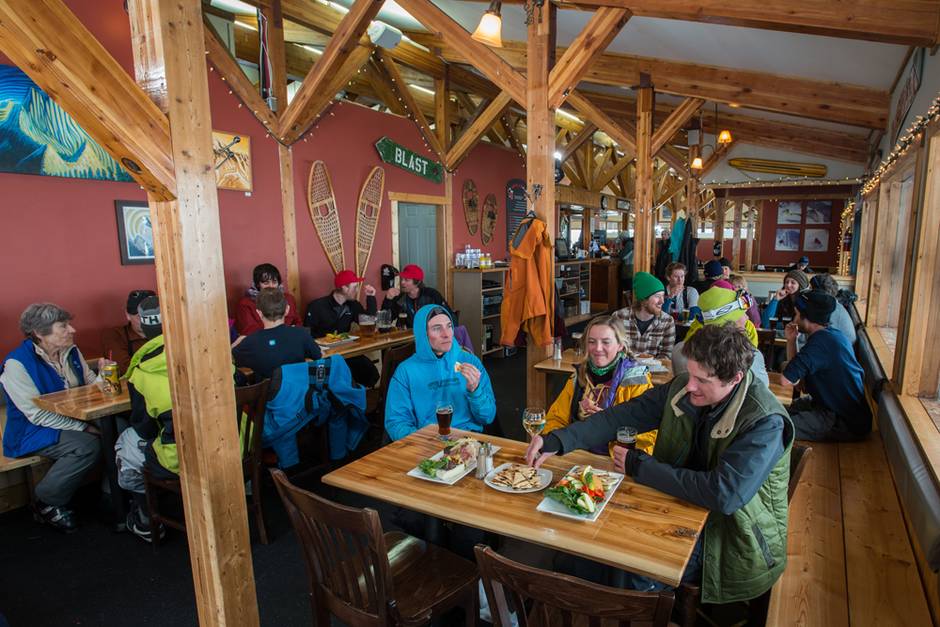 While we ate lunch on the deck of Coal Oil Johnny’s Pub at Whitewater one day, two friendly male retirees talked about their hiking forays to access virgin powder in the chutes. They gave us some tips on skiing the mountain before asking where we hailed from.

Did we plan on staying a while?

No definite plans, we said.

“Have you checked into Immigration?” one joked.

Who could blame them for putting a fence up around this mountainous oasis?

There’s no slope-side accommodation here; ergo, a trip to ski Whitewater is a trip into Nelson (population 9,800). Settled in the 1880s, its peaceful, easy feeling was first influenced by a mass migration of the Russian pacifist group called the Doukhobors in 1908. In the 1960s, the surrounding forests of the Kootenay region, being so suitable to farming the “cash crop,” attracted about 10,000 conscientious objectors from the United States. Marijuana harvesting provided income to some until they could gain residency or citizenship. Many stayed, and today the town is a mix of landscape-art galleries, restaurants, throwback hippie culture, West Coast coffee-shop vibe and an irresistible outdoor life. While still branded as a counterculture enclave 50 years after the movement, these days fibre-optic cable is installed and business people are moving from Calgary and Vancouver to work remotely.

“The draft dodgers brought a lot,” says Pat Renwick, partner in the town’s Chrysler dealership and a dedicated Whitewater skier until his knee gave out at 80. “They did not collect welfare. They came from good families and good backgrounds and brought a lot of very good vocational ideas to Nelson. They were hippies; they had their own ways, but they fit in.” 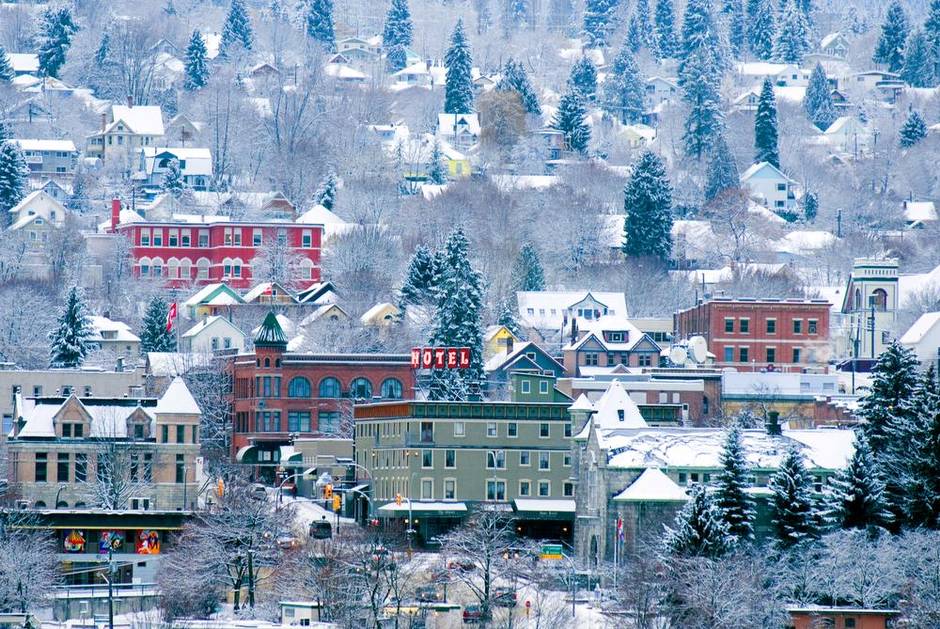 Nelson’s topography resembles a mini-San Francisco as it climbs away from the eastern shore of Kootenay Lake. Downtown is constrained within a few restaurant-filled blocks principally along Baker Street, the architecture consisting of Victorian heritage buildings such as the iconic Hume Hotel with its illogical passageways and cozy bars. That the bridge across the lake is known as BOB – for Big Orange Bridge – tells you something about a place that doesn’t take itself too seriously.

“We are hooked on the town and the lifestyle – and we don’t smoke pot,” says Shelley Adams, chef, author and former owner of the ski resort with her husband, Mike. “People say, ‘Well, you must’ve grown marijuana [for income],’ and honestly, there are a lot of funny, little shops in town. You wonder how they survive. They’re still growing it, and apparently it’s really, really good.”

The town inspired her recipes. “It’s a very eclectic, unique community,” she says. “Most people are here for the sports and the lifestyle, and they like to eat healthy.” 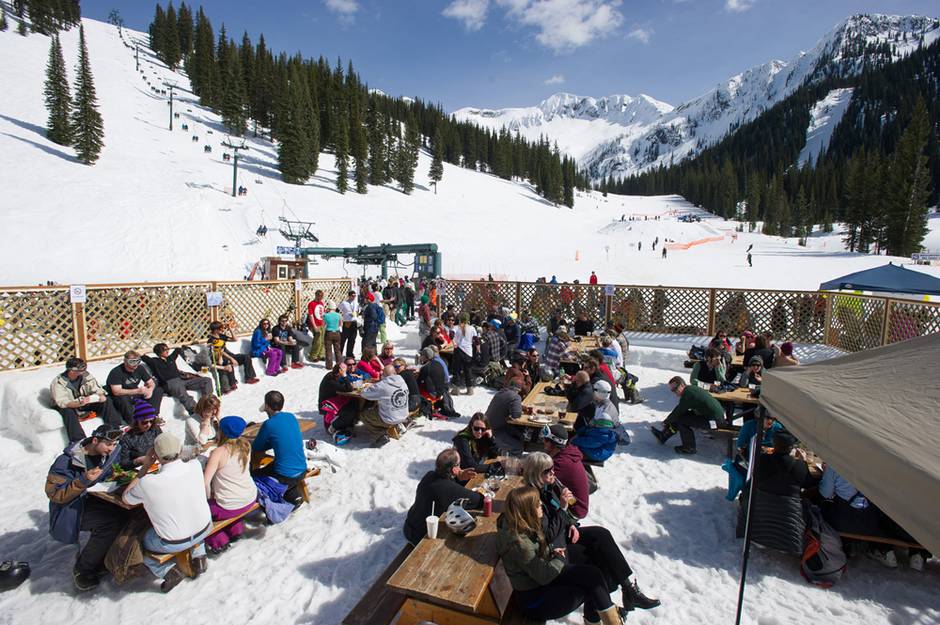 Whitewater, marking a 40th anniversary next year, started operations as a local ski club operated by 10 volunteers, including Renwick. The Adamses took over ownership and ran it for 25 years until three Calgarians bought them out in 2008 and began boosting infrastructure.

“When three Calgarians bought Whitewater, the whole community was a little excited,” says Dean Prodan, one of the new owners, and by “excited” he means they viewed the purchase with trepidation. “People said: ‘Don’t change the place; don’t change the menu.’ Why would we? We can’t compete with the big areas, like Revelstoke and Fernie. We’re trying to keep it small, people-friendly.”

There are plans for modest real estate development, and a need to renovate a worn chalet; otherwise, the owners are diligently maintaining the quaint character of a hill appreciated for its terrific variety of skiing, and its powder days. Two antiquated double chairs serve the traditional faces of Whitewater (runs are easy to advanced), Silver King and Summit offer intermediate and expert slopes, while the triple Glory Chair opened 31 runs that include a mixed bag of top-to-bottom blue cruisers, steeps, gullies, bumps and invigorating tree adventures, such as the one our weed-puffing chair buddy disappeared into.

The names of the runs hint at the backside experience: Knee Deep Glades, Giddyup Gully, Brake Line, Buckshot, Trash Glades, Bound for Glory and so on. 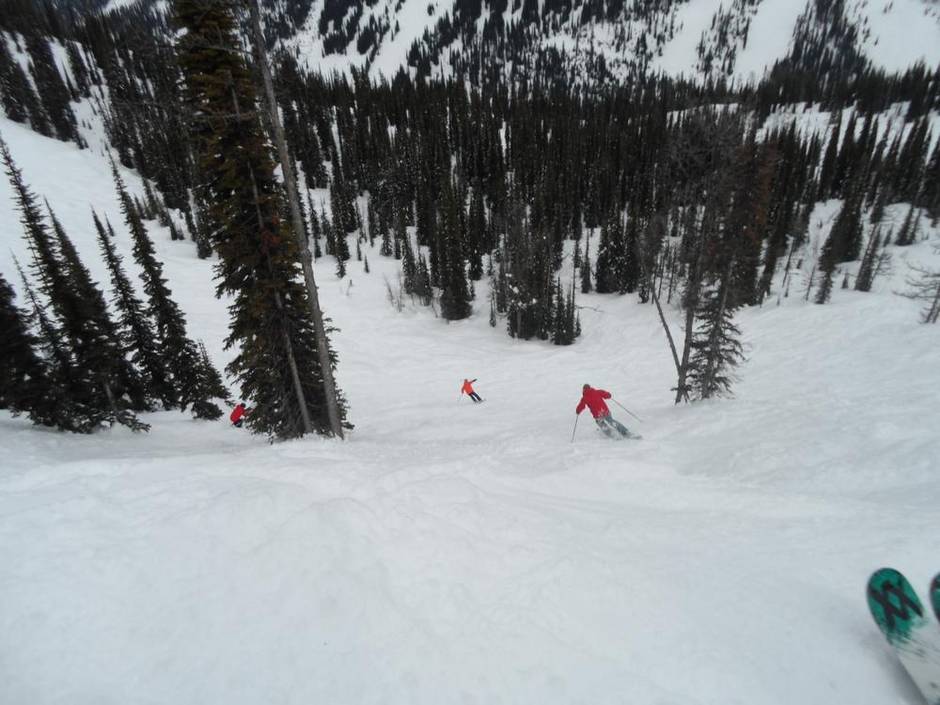 The men we conversed with, on the pub’s outside deck at lunch, are among the many who hike toward peaks and into the backcountry for virgin powder in steep chutes on the old side.

“You can ski anywhere because when there’s a big powder day, they don’t pack it,” Renwick says, meaning the hill restricts grooming to let the boarders and skiers enjoy the soft stuff.

“It’s good all over. I skied the Summit chair and hiked over to the slide areas. You’re still in-bounds, and there are so many areas like that.”

Whitewater isn’t Whistler, Vail, Steamboat or Killington. Commercialism is near-absent. It’s a skier’s mountain pure and simple, and the food is better besides. 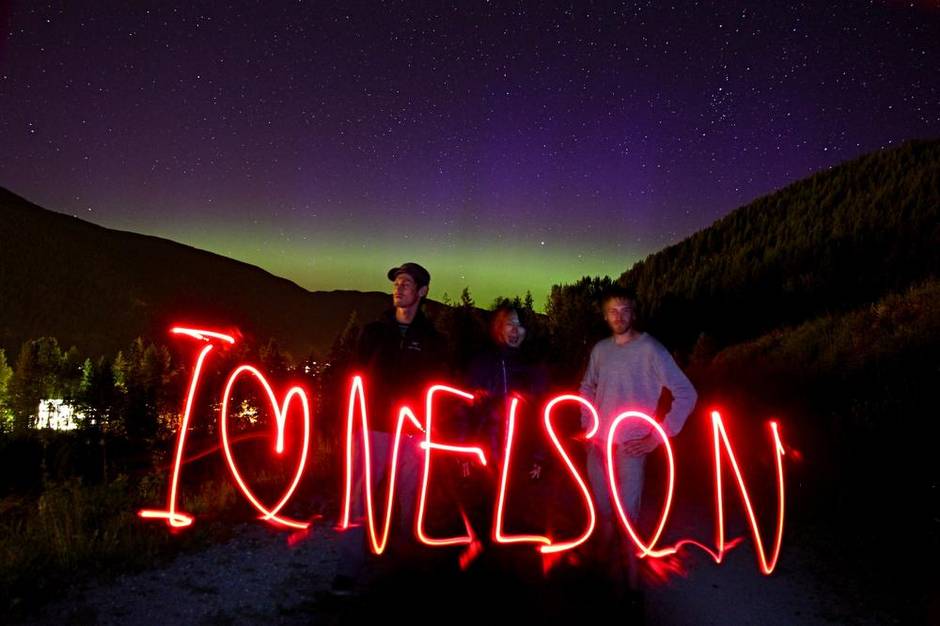 Nelson, B.C., is a three-hour (if you’re lucky), 230-kilometre mountainous drive west from the Cranbrook airport along snowbound Highway 3, the most elevated highway in North America. There are other options: 1) A rolling, 45-minute, 45-km trek north from the West Kootenay Regional Airport in Castlegar – nicknamed “Cancelgar” for the winter fog that prevents planes from landing; 2) A four-hour, 324-km drive along Highways 97 and 3, south and east from the diminutive Penticton, B.C., airport in the Okanagan Valley; and 3) a three-hour, 240-km trip north from Spokane, Wash.

Air Canada flies into Castlegar and Cranbrook, Westjet and Air Canada into Penticton; Delta, Southwest and others fly to Spokane.

Once your car is parked, there’s no reason to use it other than to drive south to the hill or north to the Ainsworth Hot Springs.

The Baker Street Inn is part of the Best Western chain and home to the popular Baker Street Grill; rooms from $137, bwbakerstreetinn.com.

Nelson’s All Seasons Café, tucked away in a back alley, is a can’t-miss. It’s tough to beat the halibut cheeks with Thai yellow coconut curry sauce. Jackson’s Hole & Grill is a friendly sports bar with tasty burgers and an informal atmosphere. The Hume Hotel’s Library Lounge is one of those pubs you can settle into for a while; the prime-rib dinner is the specialty on weekends.

If nothing else, that legacy testifies to Red’s steeps and long cruising runs – the longest stretches seven kilometres.

Red, in Rossland, B.C., is well worth the side trip from Whitewater, and vice versa. It’s a vastly different ski/vacation experience, with terrain spread across almost 1,700 hectares and three mountain peaks (Grey, Red, Granite), close to 890 metres (2,900 feet) of vertical, an unending array of tree runs, and 360-degree skiing of some peaks.

At Whitewater, visitors are obliged to stay in Nelson, while Red is more commercial, with ski-in/ski-out accommodation and restaurants in a planned village. Many of the condos have been constructed in recent years and, based on our one night in the Slalom Creek development with its marble counters, earthy colour schemes and, yes, soothing showerheads, they are well appointed. Some condos at Red come with private hot tubs on the balcony.

Rossland, which has a population hovering around 3,000, is a gold-rush town, with architecture preserved from those heady days.

What do they have in common? The people live to ski.

The writer was a guest of Nelson Kootenay Lake Tourism. It did not review or approve the story.