Also, a death zone. A place strewn with empty oxygen tanks. And bodies.

So maybe not the first choice when planning "things to do" with your kids.

Still, my seven-year-old son, London, is fascinated by this majestic behemoth. So, on a recent trip to Nepal, I decided to let him see it.

Through the window of an airplane.

Several airlines run mountain flights out of Kathmandu. After some cursory digital digging at home, we booked with Yeti Airlines, which scored mostly favourably with the online set. And the company's fleet looked comparatively modern, which helped persuade Mom to let Dad take him out of country and put him into a small prop plane over the Himalayas.

We arrived in Kathmandu late afternoon, and the next morning climbed out of bed at 4 o'clock for our 4:30 taxi to the airport, which, by the time we'd arrived at 5, hadn't opened yet.

A long line of international trekkers with oversized luggage snaked back from the closed doors blocking the airport's first security check, but they opened almost as soon as we joined the queue and, once past security, the crowd fanned out to the various airline counters and our check-in was efficient. Thinking myself a seasoned flier, I asked for two seats away from the wing to facilitate cleaner lines for my sure-to-be epic photos of the Himalayan range.

We ended up in the third row, which offered excellent views of the wing/propeller.

No matter. It's only a 50-minute round-trip flight and, once the seat-belt sign went off about a minute into it, passengers unbuckled and stumbled around freely, and the rather cramped quarters turned into a marginally chaotic, tour-bus-like photo free-for-all, each of us jostling for the best possible shot of the picturesque mountain range.

We also rotated individually through the cockpit for some forward-facing shots, but on a clear morning such as ours the rising sun makes this a technically challenging and arguably less-interesting vantage point. Still, it was nice to say "namaste" to the people piloting our plane, given Nepal's less-than-stellar air-safety record.

The best views are from the oversized passenger windows of the plane. Left side on the way out and right side once the plane banks back toward Kathmandu.

During the elbows-up scramble, my son kept his normally restless butt uncharacteristically planted firmly in the seat. Even some sweet encouragement by the flight attendant couldn't persuade him to visit the cockpit. (He's flown a lot for his age, but later told me he was scared to stand because the plane was so small and he could still see the ground out the window.)

He had ample time to view Everest from his right-side seat as the plane turned back toward Kathmandu. Though it should be noted that, while the star peak features in the marketing material, it's the Himalayan ensemble that steals the show.

My son, however, remained indifferent to the performance. As our flight touched down on the runway back in the Nepalese capital, I asked him what he thought of the tour.

"It would've been better if we saw a yeti."

Either way, it's a unique perspective.

Yeti Airlines flies Everest sightseeing tours daily from Kathmandu. Cost is $176 (U.S.) a person. A glass of champagne is provided en route back to Kathmandu. More information at YetiAirlines.com. 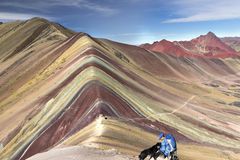 Hiking ‘The W’ in Patagonia was nothing short of wild
August 1, 2016
To reach Machu Picchu, I chose the (luxurious) road less travelled
July 4, 2016
Follow us on Twitter @globeandmail Opens in a new window
Report an error Editorial code of conduct
Due to technical reasons, we have temporarily removed commenting from our articles. We hope to have this fixed soon. Thank you for your patience. If you are looking to give feedback on our new site, please send it along to feedback@globeandmail.com. If you want to write a letter to the editor, please forward to letters@globeandmail.com.
Comments