I'm in a closed platform 76 metres above the ground, donning protective headgear and rubber armpads, looking like the fat kid dressed for street hockey but left off the squad. I'm queuing up to slide down a long, very long, tube – 178 metres to be exact – and psyching myself up for it. But then I hear a high-pitched scream; it belongs to a woman who has just been helped in with a push. Her scream fades quickly, and we all laugh nervously. Elijah, my friendly host who's been escorting me throughout, shrugs. "I was louder than that," he tells me. "Much louder."

You may not have heard, but since the end of June London has had a new attraction. It's been kept low-key until recently to allow time for personnel – the "hosts" – to be fully familiarized with the process, although shoving people into a tube seems pretty straightforward to me. Still, the ArcelorMittal Slide, as it's called, wants to be safer than safe.

There are now only four people in front of me and anticipation is beginning to gnaw into my stomach. I hope I don't scream. That would be highly uncool.

The £3-million ($5-million) slide has been designed by Belgian-born Carsten Hoeller around the ArcelorMittal Orbit. The Orbit is a red futuristic steel sculpture that opened for the 2012 Olympics and looks like – well, they call it the Big Ampersand for a reason. Yet until now its wacky twists and twirls seemed irrelevant and superfluous. You approached, took a selfie, maybe got a lift to the top, looked down at the Olympic village, south to Canary Wharf, west to the City's skyscrapers and, well, that was it. Shaped like a roller coaster, it cried out for a ride to add some extra zing. Now it's got one with a vengeance: a tube you can slide into that loops in and out of the sculpture 12 times. Top speed, Elijah tells me, is 15 miles an hour (24 kilometres an hour) and it takes 40 seconds to reach the bottom.

I'm next. I climb feet-first into a felt mat which is more like an open sleeping bag. I'm told that I must keep both hands on a strap that sticks out from the lower part so that I look into my body, chin on my chest. You can't lie back and simply panic with this thing; no, you have to peer into the plunge instead.

"Think of it as a toboggan run," I reassure myself, though I hate tobogganing. I refuse a push and slowly inch myself in, as if such caution would matter. It doesn't.

The first drop is terrifying for I can see everything outside. The tube is encased in polycarbonate, alternating between transparent and opaque. When I reach a right corkscrew, the tube turns dark. I duck my head instinctively. "Don't fight this. Go with the flow," I tell myself, but I still feel I've been swallowed whole by a prehistoric beast and I'm moving down its gullet toward annihilation. A white-knuckle dip, followed by a left corkscrew, brings a blurred view of the ArcelorMittal skeleton again, until I move back into darkness, accelerating more and more. Maybe now is the time to go hysterical. Then suddenly I'm out, expectorated into a horizontal landing. Somehow I expected to be dunked into a puddle at the end, clothes and all. Better not give them ideas. 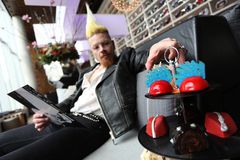 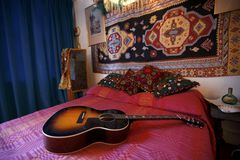 Getting a taste of London’s buzzing coffee culture
September 24, 2015 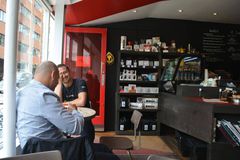