It used to be so clear: Scotland makes whisky; England makes gin. London dry or Plymouth styles, the 18th-century Gin Craze and William Hogarth’s satirical cartoon Gin Lane – all associated with the southern half of the union. What could be more English than a G&T?

Well, all that has changed. The Scots have staged a botanical border incursion and taken control of the U.K.’s gin production. The fact that Scotland now produces 70 per cent of British gin is largely due to liquor giant Diageo moving production of Gordon’s and Tanqueray to Fife in 1998. But there is a burgeoning native gin scene, too.

It began with Hendrick’s, launched in 1999 by William Grant & Sons, the family-owned company that makes Glenfiddich malt whisky. The unusual gin is a blend from two different stills: One produces an oily, juniper-heavy spirit; the other, a lighter, sweeter expression. The blend then has rose and cucumber essence added to give it its distinctive characteristic (forcing barmen worldwide to stock cucumber slices). 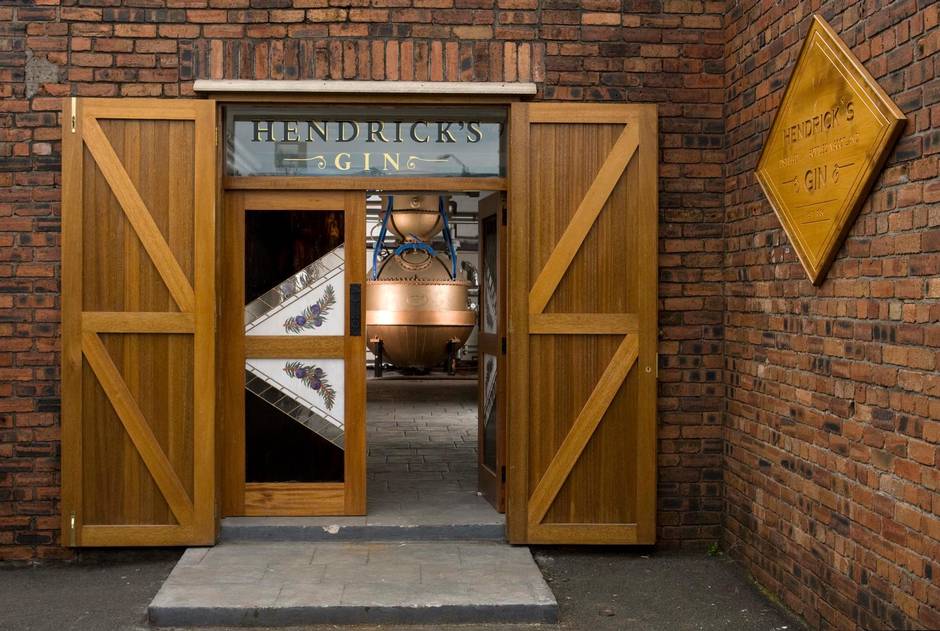 Hendrick’s Gin is credited with starting the Scottish gin craze.

“We are rightly proud of our national drink, but whisky only has three ingredients: barley, yeast and water. The attraction of applying our distillery knowledge to gin is that there are so many levers you can pull in terms of flavour,” he says.

Other malt distilleries have followed suit. On Islay, the Hebridean island off the west coast of Scotland known for its smoky whiskies, Bruichladdich decided to cram 31 botanicals – 22 of them foraged from the island – into the Botanist Islay Dry Gin. And Speyside distiller Balmenach created Caorunn; its most distinctive botanical is coul blush apple, which – along with heather, bog myrtle and other ingredients – is hand-picked by master distiller Simon Buley within walking distance of the still. Caorunn is now training bartenders to forage in order to create syrups for cocktails.

With a plethora of microclimates and ecosystems, Scotland lends itself to individual “terroirs.” Whisky connoisseurs are used to regional characteristics – Speyside’s floral style, Islay’s smokiness – and a similar culture has developed in Scottish gin. One of the newest distilleries – certainly the most northerly – is Shetland Reel, located on Unst in the Shetland Islands. “The primary aim was to make a top-quality gin, but we wanted something that anchored it to the place, so we chose apple mint,” says distillery founder Stuart Nickerson. 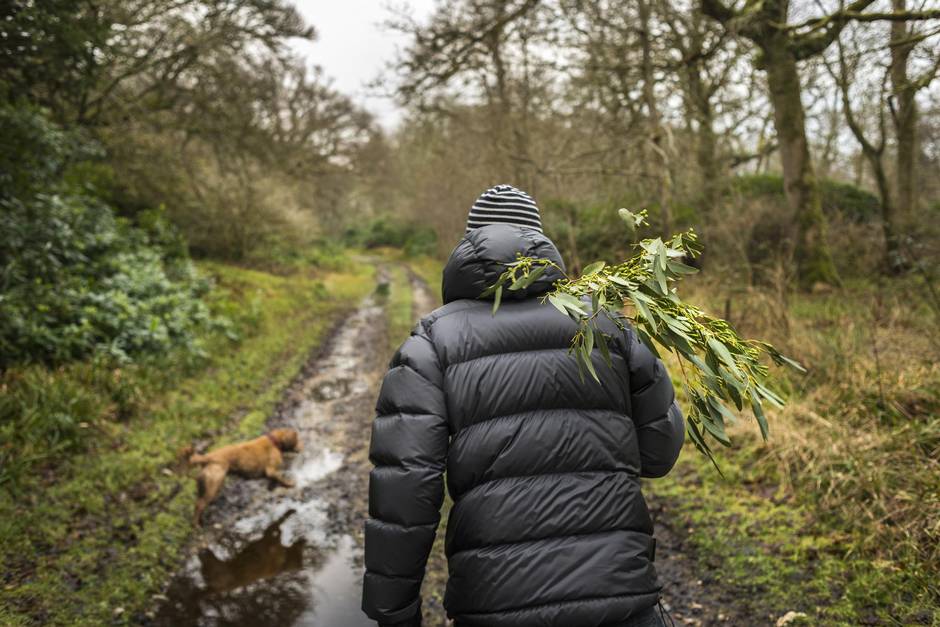 On the Hebridean island of Islay, maker Bruichladdich distilled the Botanist Islay Dry Gin using 31 botanicals – 22 of them foraged from the island.

Juniper was once rampant in Scotland. It was used medicinally and as fencing, as well as exported to Holland to make genever, the forerunner of gin. Over centuries, various factors have threatened the bushes: a lack of natural predators for grazing deer; a pathogen spread by walkers; and deliberate cutting. There is a campaign to protect the bush now and gin-maker Jonathan Engels of Crossbill Gin found a good crop on the private Inshriach estate, near Aviemore in the Cairngorms.

Crossbill is currently the only gin to use 100-per-cent Scottish juniper. “You have to carefully brush the berries off so that only the mature ones come away,” says Engels, “then I just leave them 24 hours, to let the spiders escape, and the berries go in the still. I look for consistency in quality rather than flavour. Each batch is subtly different, dependent on factors such as the outside temperature. When it’s really cold, I have to wrap a tweed jacket around the top of the still.”

Engels argues that the most important Scottish ingredient is the soft, granite-filtered water that also contributes to uisge beatha (Scottish Gaelic for the water of life, whisky): “We have such pure, clear water. You can’t run lime-rich water through a condenser – you’d be taking it apart the whole time.”

For gin connoisseurs looking for something more individual even than the idiosyncrasies of small-batch distillation can provide, Rock Rose offers a bespoke gin service – members of its Gin Tailors Club vote on the botanicals that will go into four limited-edition batches each year. 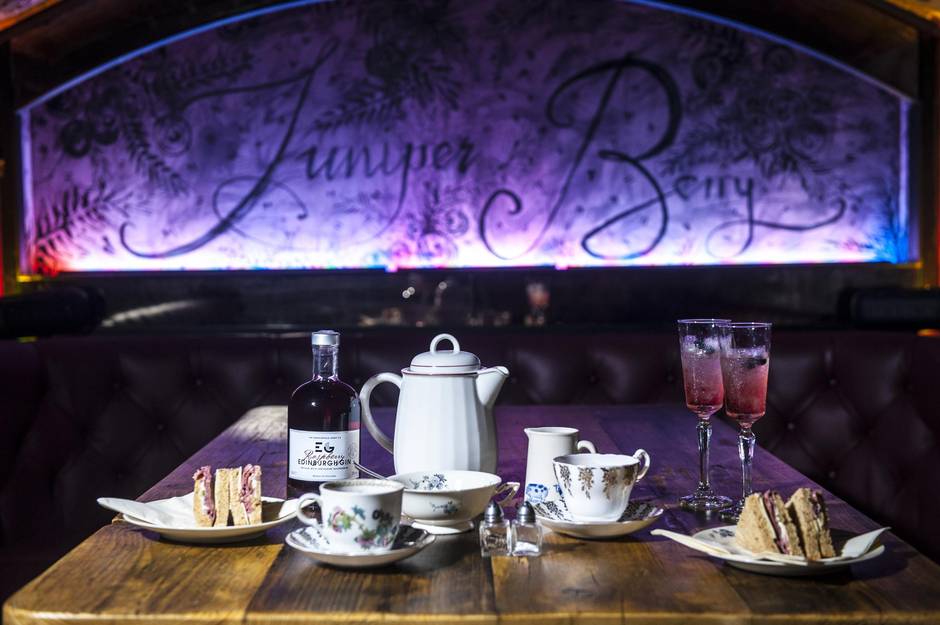 At the Edinburgh Gin Distillery, you can make your own gin.

Alternatively, on some distillery tours, you can create your own gin. Strathearn, a wonderful microdistillery on a farm near Perth that makes Heather Rose and Oaked Highland as well as Classic gins, offers half- or one-day gin-making experiences. Similarly, the Edinburgh Gin Distillery, near the Castle, offers a three-hour masterclass during which you make gin in one of the baby stills, before bottling it yourself.

Scottish gins are gaining a reputation worldwide. Edinburgh Gin recently hosted a gin-pairing dinner in Toronto, as part of a Visit Scotland initiative. Darnley’s View, from Fife, won Best Contemporary Gin with its spiced variety at the 2014 World Gin Awards. And NB Gin, from North Berwick, was served to international celebrities at the Sony Music BRIT Awards after-party.

When Simon Fairclough started Gin Club Scotland in the summer of 2014, he expected to put on tasting events once a month at most. But the demand for private and corporate events means he’s hosting at least one a week. And he has high hopes for his own Glenshee Craft Distillers, due to start production in autumn 2015. “We are converting a farmstead on the Old Military Road that used to be a coaching inn. It’s nice to think that I’ll be distilling gin in a place where soldiers once stopped on their way to chase whisky smugglers.”

As Flower of Scotland almost goes: “… and sent them homewards to drink our gin.”

Pickering’s Gin. Tours of the Summerhall Distillery in Edinburgh, by appointment; pickeringsgin.com.

Edinburgh Gin. Tours of different lengths of time and levels of booziness, plus a gin-making masterclass; edinburghgindistillery.co.uk.

Perthshire Gin Festival, June 13. Some might argue World Gin Day is every day, but this is its official day. Tasting, food pairing, etc. at the Dalmore Inn, Blairgowrie. Organized by ginclubscotland.com.

Heads & Tales, Edinburgh. Every evening, this bar takes over the Edinburgh Gin Distillery at 1a Rutland Place, serving a selection of gins and cocktails; headsandtalesbar.com.

One Square, Edinburgh. This bar and restaurant at 1 Festival Square has its own gin, created by Pickering’s, One Square Gin; onesquareedinburgh.co.uk.

Inshriach House. This Edwardian shooting lodge in the Cairngorms can be hired for groups of up to 17 (it is self-catering), or individuals can go “glamping,” choosing from accommodation including yurts and a converted fire-service truck. Residents can visit the Crossbill gin distillery on the estate; inshriachhouse.com.

Saxa Vord Resort. A former RAF base on Unst in the remote Shetlands – closer to Bergen, Norway, than to Edinburgh – converted into a hostel and self-catering homes. It’s a great location for wildlife, and you can visit Britain’s most northerly brewery, Valhalla, and soon the Shetland Reel distillery, too; saxavord.com.