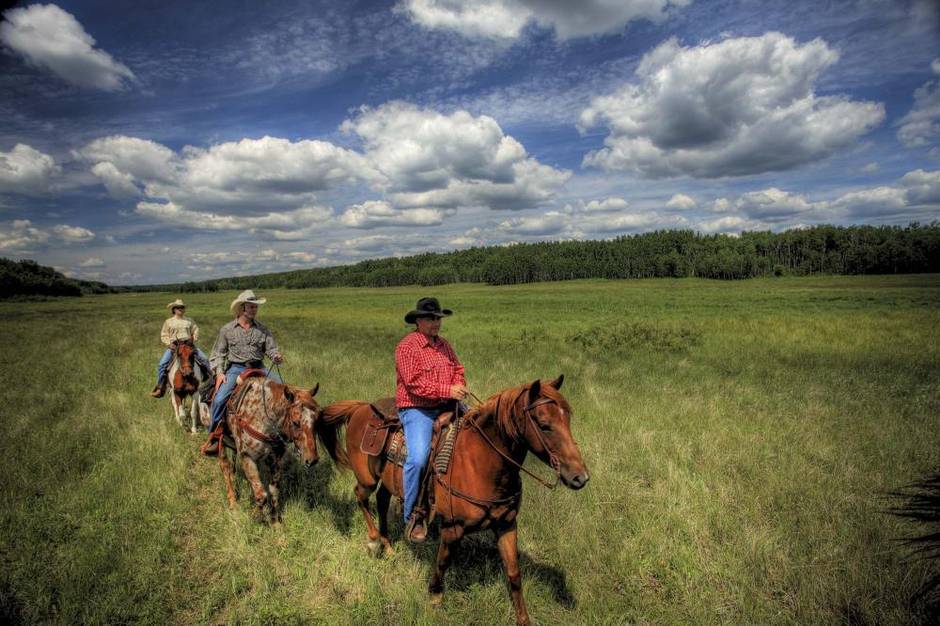 We’ve been riding for hours now, but still I cannot get the song out of my head. Over and over it turns in my mind, occasionally slipping out of my lips in the form of a soft hum or a low-sung, off-key tune as I sit back in the saddle and let Jesse, a beautiful chestnut quarter horse, carry me forward. It’s a song about pushin’ horns and bowed legs and gravelly voices, about singing yippy ti-yi yay and Amazing Grace, about all the nights you couldn’t sleep because it was too damned cold. It’s a song from my childhood, when I longed to be a cowboy – an anachronistic and perhaps quixotic dream that was always accompanied by music. Here, despite my city-boy clothes and my awkward riding style, I am finally living it, traversing hundreds of kilometres of hinterland in search of a big herd of bison.

The dark side of the moon

This is the far side of Prince Albert National Park, a vast, almost-4,000 square kilometre reserve in northern Saskatchewan. One of only two national parks in the province, Prince Albert is special for many reasons, but chiefly for Canada’s largest free-roaming herd of plains bison that call it home. I was here to discover the park’s greatest treasures in its remotest parts, living out my rawhide, City Slickers dreams on horseback.

And I was in good company, joined by Murray Peterson, a friend-of-a-friend and a former park warden. Peterson met me at a local diner just before I entered the park. Over eggs at a place called the Yellow Fender, he spread a map before me, showing me the route we would be riding, and where we’d be meeting Gord Vaadeland and Glen Hegland, the two real-life cowboys who were to be our guides and hosts on the trip.

Vaadeland is a third-generation rancher and owner of Sturgeon River Ranch, which has been in his family since his grandfather homesteaded there in 1929. He has been offering horseback excursions into the park since 2007, and overnight trips since 2010, which is when Hegland – a long-time friend of Vaadeland’s, and also an expert horseman – joined his crew.

“The west side of the park, it’s a long way from anywhere,” Peterson said, pointing to a rather empty spot on the map. “It might as well be the dark side of the moon.” 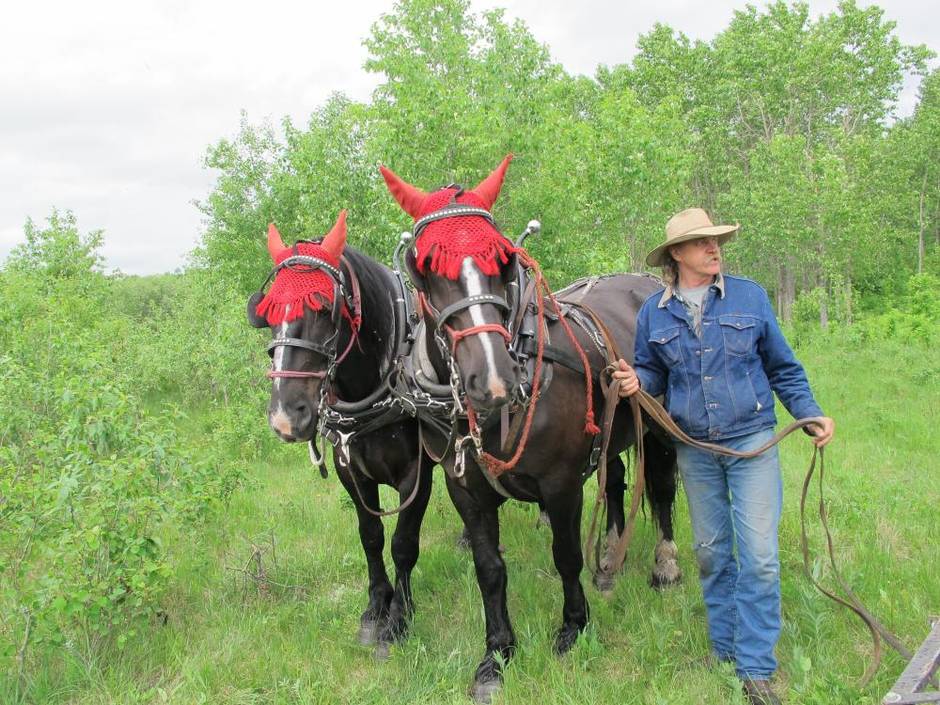 So we launched westward in my rental car with Peterson riding shotgun, filling me in on the vicissitudes of the plains bison in this part of Saskatchewan. When the first Europeans travelled to the Canadian west, they encountered million of bison, which were soon hunted to near-extinction by the end of the 19th century. A couple dozen were reintroduced to this area in 1969 by the federal government and, protected within the park boundaries, they thrived.

The current herd numbers somewhere near 400, but keeping the animals safe is a challenge: They are preyed upon by wolves and hated by ranchers, whose fields are torn up when bison roam outside the park. A group called the Sturgeon River Plains Bison Stewards has been instrumental in the preservation effort, notes Peterson, a long-time member. They act as a go-between, bridging the gap between ranchers, Park officials and other interested parties. “The bison are our top priority,” he told me. 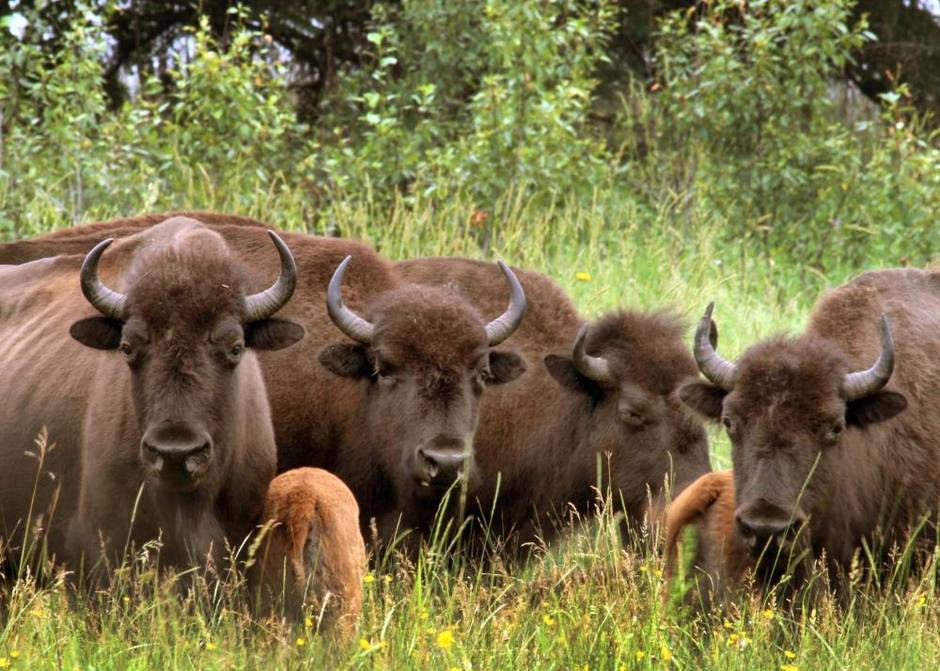 Encountering a bison in the wild is the Saskatchewan equivalent of seeing a lion on safari in Africa. (Parks Canada)

Leaving the road behind, we navigated to a small clearing where Glen Hegland greeted me with a firm handshake. He looked like someone sent from central casting for Westerns, from his floppy hat right down to his Wrangler jeans and scuffed boots. I asked him whether he thought we would see any bison on our two-day trail ride. “I call them buffalo,” he said, a wry smile forming behind his droopy mustache. “I’ve never heard of anyone named Bison Bill.”

Encountering a bison in the wild is the Saskatchewan equivalent of seeing a lion on safari in Africa or a tiger in India. While they can never guarantee sightings, Hegland explained as he prepared the saddle for Jesse, our chances were pretty good – several of the animals had been spotted in recent days. Then he eyed my low-cut Adidas sneakers suspiciously. “Boots would’ve been better,” he said, adjusting the stirrups to suit my poor choice of footwear.

Soon we were joined by Vaadeland, who would serve as chief cowboy on this adventure. He directed everyone to saddle up, which I did – rather awkwardly and not without some help. Soon we were off, Glen behind the reins of two big workhorses and driving a sort of chuckwagon (technically a “high-wheeled wagonette”), the rest of us trotting lazily behind, first down an old dirt road that had long been closed off to traffic, and then onto a trail that plunged deep into the thick of a dense aspen forest with branches that threatened to claw at our faces.

Our first sighting did not take long. About 90 minutes into the ride, we approached a long, narrow clearing. “Get your camera ready,” Vaadeland instructed. “We see them here all the time.” And sure enough, down at the far end we spotted two big bulls, maybe 300 metres away. But they quickly became aware of our presence, and booked it back into the woods before I could get a good shot. 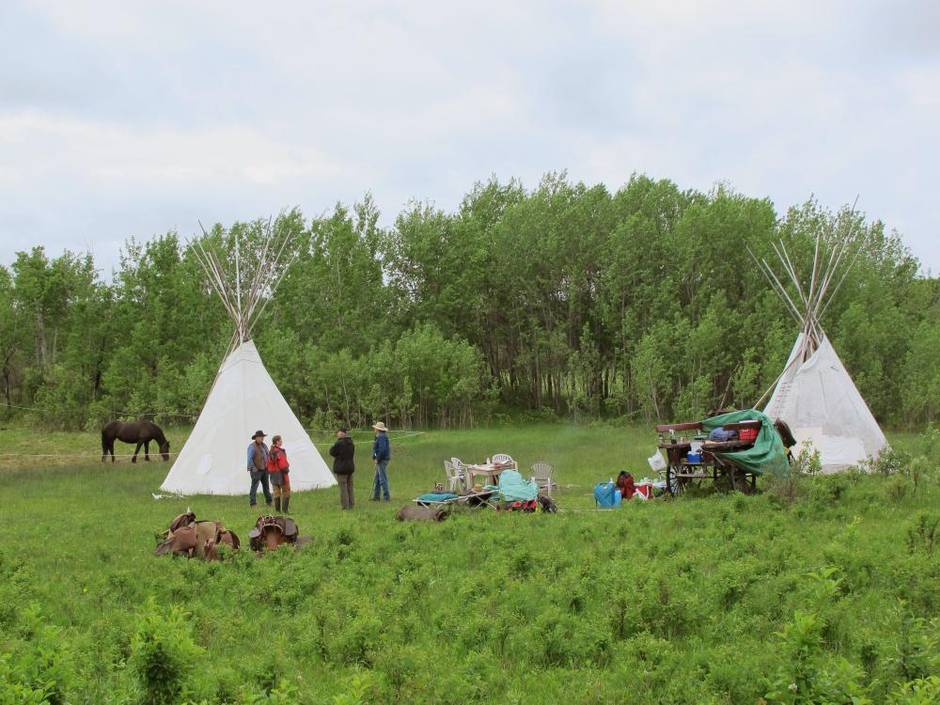 Setting up camp in the more remote half of Prince Albert National Park. (Tim Johnson)

Sleeping under the stars

Disappointed and hoping for more, we made camp at another clearing equipped with two teepees. I had been on the horse for less than three hours – about 10 kilometres – but, as I climbed down from Jesse, I quickly understood the meaning of the term “saddle sore.” My legs bowed and my thighs ached as I walked it off around the grassy site. Soon we settled in around the fire, swapping stories and feasting on homemade cheese and bacon biscuits, and northern pike provided from nearby Smooth Stone Lake. Better fare than most cowboys could expect, it’s true.

Vaadeland recalled the two times he served as an on-camera guide for the television show Mantracker, as well as the many trips where he had to give special instructions to city-people who didn’t know how to pee in the woods. He also shared a few harrowing stories about close-up encounters with bison, which can become ornery, defensive and dangerous when cornered. I asked him who usually signs up for a trip like this. “It’s not so much a demographic as a ‘psychographic’ – people with a certain mindset, who are looking for a truly authentic experience,” he said. Past guests have included couples, school groups and three adventurous sisters from Yellowknife who insisted on staying four days rather than the standard two or three.

As we polished off the last of our vittles another bison made an appearance – as if on cue – trotting across the prairie behind us. This time my camera was out of reach, back in my bag on the high-wheeled wagonette, so I just sat back and enjoyed watching this icon of the west saunter across the clearing, perhaps 100 metres away. “Now that’s a good sighting,” Vaadeland said, after the bison had disappeared back into the aspen. “We almost never see them at camp like this.”

After the sun had faded, we began to prepare our beds. Glen slept right under the chuck wagon and Gord just laid down on the ground with a blanket, apparently unbothered by the ashes that blew into his hair as he nodded off. I chose a slightly more comfortable option, sleeping on a low cot that had been stored in one of the teepees. I set it up outside, under a big Saskatchewan sky filled with a million stars. Just before bedding down, I saw a faint, white streak across the sky, a pale reflection of the aurora borealis. Suddenly – again, as if on cue – a shooting star streaked right through the band of Northern Lights.

My voice may not have been gravelly, we certainly never pushed any horns and I was still wearing my sneakers. But at that moment, I felt like a real cowboy. 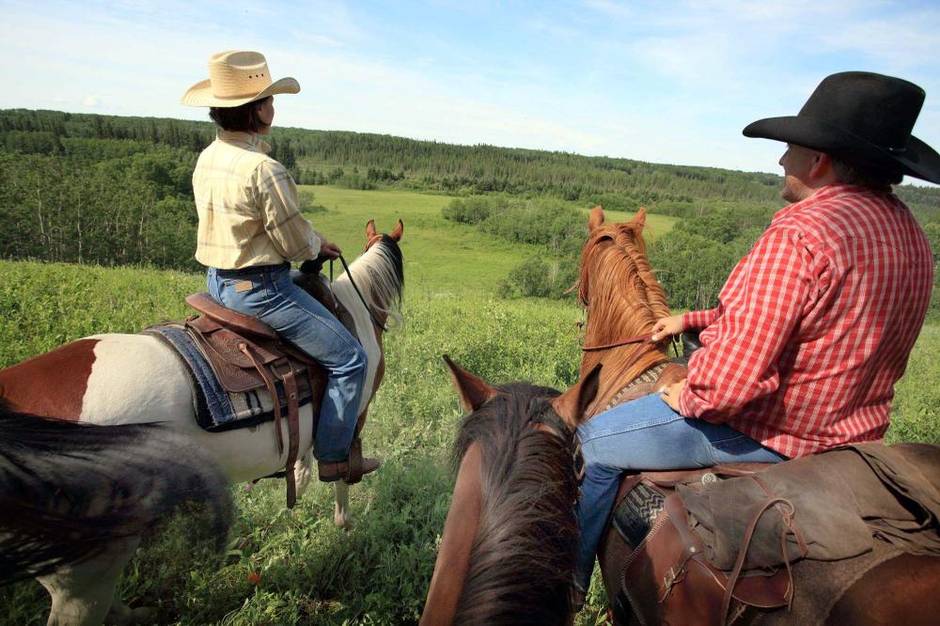 Saskatoon John G. Diefenbaker International Airport is serviced by both Air Canada and WestJet. From there, it’s about a three-hour drive north to Waskesiu.

Sturgeon River Ranch offers a number of packages inside Prince Albert National Park. The season runs from May to October. Overnight, all-inclusive trips start at $250 a person, a day. sturgeonriverranch.com

Waskesiu, a small, pretty town on the eastern side of the park, is a good start and end point for trips into Prince Albert National Park. There, you’ll find comfortable hotel accommodations at the all-suite Waskesiu Lake Lodge, as well as a variety of good restaurants. From $139 a night. waskesiulakelodge.com

The writer travelled courtesy of Tourism Saskatchewan and Parks Canada. They did not review or approve this article.