For a year before leaving on a polar training expedition, I lived in fear of freezing to death.

Late on a February afternoon we reach a polynya, a rare patch of water in the sea ice. Before my numb lips can form an excuse, I'm squeezed - ski boots, down parka and all - into a one-piece, waterproof "swimsuit." I slide off the two-metre-thick ice sheet into the slushy Arctic Ocean. Surprisingly buoyant and warm, I grin like an idiot, backstroking through a pond of tinkling ice chunks.

What sounds like the nightmare is actually a dream come true for a small group of international polar quest adventurers. Our leader is Iqaluit-based Matty McNair, who every winter crams more than two decades of Arctic and Antarctic travel experience into a rigorous two-week polar training course. After 22 years as an Outward Bound instructor, Ms. McNair led the first-ever commercial trip to the North Pole, was the first woman to guide an expedition to the South Pole and earned a place in the 2005 Guinness World Records for the speediest surface journey to the North Pole, shattering Robert Peary's 1909 record.

A petite mother of two in her late 50s who barely tips the scales at 125 pounds, Ms. McNair runs her adventure company, NorthWinds, out of Nunavut's capital. The day I arrive at her house, the front doorknob sticks to my fingers.

By 9 the next morning, the four other participants - an Aussie, a Brit, a Quebecker and a young woman from Germany - are sipping coffee with notebooks ready in Ms. McNair's dining room. This is our classroom for six days of lectures and workshops before we head out on a four-day mini-expedition across the sea ice. Eventually, Ms. McNair will leave the group alone on the ice to spend three days charting its own course back.

"We'll start with clothing and the tents you'll be sleeping in tonight," she chirps. There is horror on more than one face as we glance at the chalkboard where she has scribbled: "Monday: Blizzard warning. Night: winds 30-50 kph. Windchill: -31 C." Plunked amid mounds of gear on the living-room floor, Ms. McNair rattles off the pros and cons of winter clothing. "Nothing is perfect, not even what the Inuit wear." Caribou is warm, but stiff when wet; sealskin is waterproof, but not warm. She nixes pricey high-tech material like Gore-Tex (because it doesn't breathe when it freezes) and vapour-barrier socks in particular, handing out plastic sandwich bags instead. "These work better," she says, adding that cheap ski gloves often vent sweaty hands better than high-end, windproof models. Then we talk accessories, including extra-large snot rags on mitts and crotch zips in your pants. Ms. McNair travels "commando," having ditched chafing underpants. "Now I'm the fastest pisser in the Arctic," she grins.

In double-walled Hilleberg expedition tents pitched between Ms. McNair's house and the Northmart grocery store, we struggle into three-tiered sleeping bags that include a vapour barrier and a waterproof overbag. I feel like a sausage in phyllo pastry, but I'm toasty.

Day 2 begins with granola and warnings of chilblains, frost-nip, frostbite and snow blindness complete with a gallery of photos of oozing blisters and blackened toes. People pay money to risk this? Big bucks. About $250,000 buys an expedition to the North Pole from Ward Hunt Island at the northern tip of Ellesmere Island. About $60,000 takes you on a guided trek to the South Pole.

After a first-aid primer and basic navigation delivered by Ms. McNair's twentysomething son and daughter, Eric and Sarah McNair-Landry, adventurers in their own right, we get our pulks, 12.5-kilogram Scandinavian sleds attached with a rope to our body harnesses for carrying expedition gear. Then we head outside to tackle the terrain. Skis slip out from under us. Bindings snap. I trip over my poles and do a face plant. After fretting so long about the cold, my biggest problem is battling the sweat that fogs my goggles and camera lenses. This is a unique opportunity for future polar travellers to test their skills and equipment in real conditions within sight of a hospital and hotel bars.

By Day 6, we have discovered that bras are useful for keeping camera batteries warm, that a row of sleeping bags can double as a makeshift runway for rescue or supply planes. Theoretically, we're ready for our mini-expedition. Before we pack, Ms. McNair doles out 30-pound bags of dry dog food to load onto our pulks to mimic how heavy these sleds would be piled high with provisions for a multimonth trek.

The sheer weight is shocking. After a frustrating and utterly exhausting day, we are still within sight of Iqaluit as we pitch two-man tents complete with snow anchors, ramp up stoves, set up our beds. But after two hours, we've had a makeshift sponge bath, changed and pinned our sweaty clothes to a clothesline, gobbled soup and freeze-dried beef stroganoff. Tucked into my sleeping bag with a hot-water bottle at my feet, I fall asleep listening to the eerie creaking of the ice sheet.

Over the next three days, we settle into a strict routine of travelling for 60 minutes, breaking for 15, navigating by the sun and scaring off imaginary polar bears by waving our skis in the air and shrieking. And we eat. Continuously, to keep up with a daily 5,000-calorie burn. My second fear, as unfounded as freezing to death, was that I wouldn't be fit enough to keep up. "You train your body before you go, but polar expeditions are done 80 per cent with the mind," Ms. McNair says.

When we arrive on our last day together at the surreal, ice-cream-mounded tidal shoreline of the polynya, its -3 C water steams into the sun. "Swimming" in the polynya is the highlight of the trip for everyone.

The following morning, as we buck across the ice, I feel not only a flood of bliss at having survived, but surprise at how much I enjoyed the no-room-for-mistakes mind game of polar travel.

Plan on polar training? Here's where to go
January 26, 2011
Dogsledding delivers a reality check in the Far North
February 11, 2011 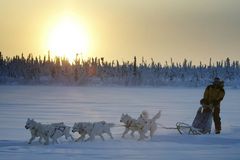 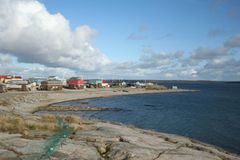