It took just one short ski stride past the end of the well-packed snowmobile trail to realize the snowpack was utterly and completely rotten. A winter of frigid temperatures had left the snow the consistency of sugar. Breaking a trail though this waist-deep soup in southeastern British Columbia – over the headwaters of Maiyuk Creek and into Height of the Rockies Provincial Park – was going to be miserable.

"Let's hope it gets better as we climb," grunted Karsten Heuer, somewhat optimistically. A long-time national park warden and new leader for the Yellowstone to Yukon Conservation Initiative, Heuer is known for his books Walking the Big Wild (chronicling a journey from Yellowstone to Yukon) and Being Caribou (a season spent following the porcupine herd). Despite being friends for more than a decade, this was our first wilderness journey together, and within minutes I realized Heuer was navigating the complex terrain – picking up game trails and ancient tree blazes – as effortlessly as most Canadians drive to the corner store.

Slogging uphill with us was John Bergenske, executive director of environmental NGO Wildsight; a silver-haired bull moose of a man and no slouch in the outdoors himself. After graduating from university, Bergenske abandoned his native Wisconsin to carve a life from British Columbia's Purcell Mountains, constructing a remote homestead – felling trees, cutting boards and splitting roof shakes by hand – and living as a beekeeper and horse wrangler.

The three of us depend on wilderness journeys to bring balance to our lives. And the need to escape does not abate as the days shorten and the lakes freeze. After months of trying to co-ordinate our schedules, there was no way a little rotten snow was going to turn us back.

So on we plowed; sweating, slipping and floundering through the charred remnants of an inferno that swept this valley a decade ago. For as far as the eye could see, the hillsides appeared carpeted in a fuzz of black toothpicks, while towering above, and playing peek-a-boo with clouds, rose sheer cliffs and windblown summits. Moose, lynx, marten, and hare had all passed this way before us; their tracks criss-crossing the virgin blanket of white. Underfoot, occasional fingers of green regrowth reached upward; the only hints of colour in this otherwise black-and-white world.

Hidden in the southeastern corner of British Columbia, Height of the Rockies Provincial Park is draped across the Continental Divide; a land of high peaks, deep valleys and glaciers. Bordered by Banff to the north, Height of the Rockies occupies the same landscape as its more famous neighbour, with one critical difference: there is no easy way in. No pavement leads here; there are no tour buses and no souvenir stands. Instead, a maze of bumpy logging roads provides access to remote trailheads. Few people visit during summer. Almost none come in winter. A logbook, perched on a pole by the park boundary, showed no one had passed this way since October. It was the perfect destination for three guys who needed to get away from it all.

After hours of back-breaking exertion it became clear we would not reach our destination that night, a rudimentary cabin on the shores of Connor Lake. Instead, as light drained from a wane winter sky, we stomped down a platform of snow and set up a lightweight teepee. Bergenske assembled a portable wood stove (no larger than a coffee-table book when packed, and weighing only an astounding 2.2 kilograms).

Soon a fire was crackling. With sleeping bags spread across the snowy floor, and pasta simmering, we poked our heads from the teepee doors and watched uncountable stars dance across the darkening blue sky. The stillness was thunderous.

Camping in winter may appear ludicrous to some, and intimidating to others. But it shouldn't. Canadians don't differentiate between "walking" and "winter walking." This is an oversimplified analogy, I admit (winter camping requires trustworthy gear and apprenticeship to stay safe) but it is neither as difficult nor as uncomfortable as it appears. And wilderness – in winter – holds its own special set of wonders. Crystal blue skies followed us for the next five days, and as frigid air settled in the deep valleys, occasional trees cracked as loud as gunshots, while hoarfrost tinkled beneath our skis like broken chandeliers. Although the land felt abandoned, a never-ending narrative of paws prints and wing scuffs played out across the snow.

Our original plan – optimistic, and made in the comfort of home – was abandoned. With rotten snow slowing trail-breaking to a crawl, there would be no trip over the legendary Pass-in-the-Clouds; no traverse under the great bulk of Mount Joffre; no visit to the wind-swept plateau surrounding Limestone Lakes. Instead, we'd stick to Forsyth Creek, exploring frozen lakes, hanging valleys, high passes and alpine ridges, which was of course perfectly fine: We were outside – with frost on our cheeks and sun (occasionally sunscreen) in our eyes – and happy for it.

At the high pass leading into this remote valley, we'd stumbled upon a single set of loping tracks. "Wolverine," Heuer announced as he stooped to run a finger across them "and fresh." Elusive and shy, there may be no animal more emblematic of Canada's shrinking wild spaces than the wolverine, and this spine of the Rockies remains one of its last strongholds. (Over the next ridge lies unprotected crown land, part of a proposed wildlife corridor to protect wildlife habitat from Height of the Rockies to Waterton-Glacier national park to the south.) In the days ahead, no matter where we travelled – through dark, tangled forests, over high ridges, across the Abruzzi Glacier – that energetic wolverine had been there before us. Apparently, there was no corner of this remote kingdom the busy critter had not patrolled. We even spotted its tracks making a heart-stopping, straight-line descent of a sheer mountain face.

We never saw the wolverine that week, but it was never far from our minds. We encountered its tracks one final time, as we climbed out of the valley and began the descent back toward our pickup truck. Then the deep, distinctive tracks disappeared. Soon we were back on snowmobile trails, the shriek and groan of logging equipment echoing across the valley. By the time we arrived at the truck – with stubbled and wind-burned cheeks – it felt like months had passed since we skied away – which of course was precisely our goal.

What are you waiting for? Go cross-country skiing
January 7, 2011 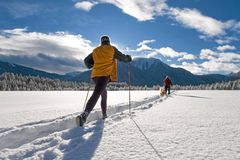 Bruce Kirkby on what it takes to truly escape
October 1, 2010
Could Flathead Valley be Canada's next national park?
April 16, 2010 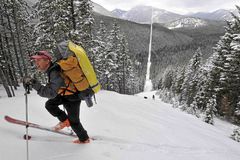