The yoga festival started at 6 a.m. in Rishikesh in northern India. It was 10:30 p.m. and we were still arguing with the airline attendant in Delhi

"There is nothing I can do. The flight is cancelled," she said again. Then she leaned over her desk and whispered, "Unless you take an overnight taxi. But it is dangerous. I do not recommend it."

The seven of us, all North American women anxious about missing out on enlightenment and inner peace, nodded in agreement: We'd take the taxi.

Prospective cab drivers appeared, phantom-like, out of the thick hovering exhaust fumes of the parking lot. The first lumbered toward us, scowling. He wore a nametag that said, "Hello My Name is Ravi."

The second driver had a black patch over one eye and his other eye wandered uncontrollably toward the bridge of his nose.

I made a beeline for Ravi.

By midnight we were on the highway. Fabiola, Jamie and I crammed into the back while Amy sat pale and terrified in the front. Cars raced towards us, veering away at the last moment, missing our car by inches. Horns blared. A motorbike carrying a family of four zoomed past, nearly causing a collision with a bus. Ravi yelled out the window cursing them. The child on the back of the bike threw his samosa at us. Amy screamed as bits of potato and curried peas smeared across her window.

I suggested singing Beatles' tunes to lighten the mood, beginning with their earliest albums and working our way to Abbey Road.

I thought we sounded pretty good but Ravi made an audible groan during our encore of Hard Day's Night. I stopped at Rubber Soul when I realized I was the only one belting out "Baby you can drive my car."

After several hours of slogging through late-night traffic, Ravi barked: "Where are we going?"

Groggy and unsure if this was a metaphysical interrogation I answered, "Rishikesh?"

"That is too far," he said, slamming his fist on the steering wheel.

Around 4 a.m., Ravi stopped the car and had a cigarette. Then he stood next to my window and said, "No further."

"I don't think this is Rishikesh," I said. Two emaciated cows stood next to an abandoned shack.

Ravi had a long heated conversation on his cellphone, kicked his tire and got back in the car. He drove the rest of the way like a suicidal maniac.

At sunrise Ravi dumped us at the Rishikesh Bridge next to the Ganges River. He drove off, laying on his horn, almost taking out a fruit cart on his way.

I laid out my mat at the yoga festival, reeking of cigarettes, still in a flop sweat from the drive. People "ohmed" in lotus position. Perfect, I thought, I'm ready for my transcendental experience.

And then I fell asleep. 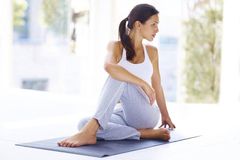 I nearly got suckered by a sweet-talking gem scammer in India
February 24, 2014 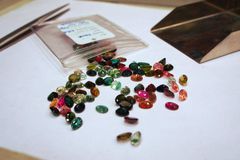 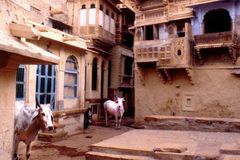