It's a universal truth of long-distance travel: Going from A to B will mean a tedious amount of work getting in and out of LAX, JFK, YYZ or CDG.

Airports can be architectural masterpieces filled with craft breweries and sushi bars. But once you get beyond the sliding doors, you are forced to confront an inescapable fact: Most airports are not where you want to be. Having arrived at your destination, you still have to get to your destination.

And then, when your trip is done, you have to do the same thing in reverse. The last memory of any journey is that final dash to the terminal, with all the pleasure-nullifying costs and tensions that go with it.

For a long time I've tried to make a game of it. Since the trek to the airport is inevitable, I can at least reduce spending and expand my survival skills by taking public transit. In Toronto, I've brought the $60 cab ride down to a $3 token without a huge loss in time or human dignity. In Catania, Sicily, I managed to step out of a B&B doorway at 6:30 a.m. and catch a bus that delivered me to my flight in less than 10 minutes.

So far, so good. But that trip got me thinking: I could have walked.

Not every airport is located in some God-forsaken security zone wrapped up in hellish concentric circles of bleak parking lots, drab industrial zones and maniacal motorways. When I went to Charlottetown this summer on an overnight work trip, I realized I had finally the opportunity to take my first airport walk.

The circumstances were perfect. I could carry the few things I needed in my backpack. Distance in Prince Edward Island is small-scale – the airport turned out to be just eight kilometres by road from downtown. And I had such an awkward wait between my noon hotel checkout and my 6:30 p.m. flight that boredom by itself would get me moving. If nothing else, walking eats up time.

My plan got better when I looked at the map. I'd expected dreary sidewalk-strolling as the small price to pay for my pedestrian freedom – similar to the dispiriting seven-kilometre hike from Milan's Linate airport to the city's centro storico that I'd designed for my daughter during one of those Italian general strikes. But then I noticed that the Charlottetown spur of the cross-island Confederation Trail passed within what even car drivers would consider walking distance of the airport.

I left my downtown hotel and, with too much time on my hands, ambled up to the Noodle House Chinese restaurant north of the downtown for a plate of pork chow mein. Next to me, in this surprising corner of Charlottetown suburbia, a formal banquet was in progress, complete with speeches in Mandarin.

A few colleagues, caught up in the romance of my airport pilgrimage, had talked about joining me, so I checked my BlackBerry as I headed back to the start of the trail in Joe Ghiz Park, just east of the city centre. When it became clear that their best intentions had not survived the celebrations of the night before, I set off in solitude.

The rolled stone-dust trail followed an old rail line, winding its way past backyards and across city streets. It was dead flat, open to the sun and not picturesque in any obvious PEI way, but it was quiet and the kilometres ticked off effortlessly. The city began to turn greener. On my right appeared the Ravenwood experimental farm. Pairs of cyclists and joggers passed by as I approached the University of Prince Edward Island, where a marching band was practising – Islanders love their ceremonial brass. There were pens on my right belonging to the Atlantic Veterinary College's large-animal facility, but no recuperating creatures to slow me down.

My walking pace was too fast. Judging by my route map, I was going to arrive at the airport three hours ahead of my flight. So I took advantage of my hike's obvious suburban-ness and side-stepped into the almost-adjacent Charlottetown Mall.

Malls to me are like airports: places to get out of fast. I walked end-to-end repeatedly, and barely made a dent in my time. Looking for some stop-gap airport reading, I asked a shopper where the nearest bookstore was.

She pointed me back toward the university, but when I told her I was on foot, she recommended Target.

Exotic travel this isn't. But Target had a book rack that was at least as good as an airport convenience store, and my laser-like literary vision immediately spotted the latest Jack Reacher page-turner. I returned to the trail ready for anything air travel could throw at me.

My walk picked up a bit more of the natural world (foliage, bird song, a giant crow) but crossing the busy Perimeter Highway, with a prolonged wait at traffic signals that tested my hiker's impatience, reminded me that I was still on the grid. Most of the cross streets are not signed for trail walkers, so I had to make an educated guess about the airport turn-off: the point where a peaceful cemetery restored the rustic PEI calm just beyond a heavy-equipment depot and a hole-in-the-ground construction site.

And there it was, over the rise and past the roundabout – arrival and departure in one and the same place. I walked down a waiting sidewalk into the empty terminal, found a place to sit, pulled out my thriller and waited for the world to catch up. 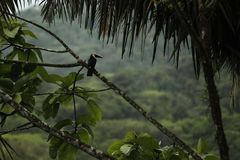 How an airport meltdown turned into my ticket home
July 21, 2014 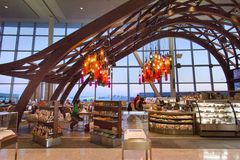