"Let's do the Whites," my Boston friend will say at least once every winter. Not that there isn't plenty of good skiing in Quebec where I live, but there's nothing like a dose of big-hill and small-village New England character. So I pack up my skis and we meet in the snowy White Mountain hamlet of Jackson, complete with an 1876 covered bridge, church steeples, a frosted stream – and 150 kilometres of groomed cross-country ski trails running right through town.

The charming village has been a tourist magnet since the late 1800s: By the 1920s, 40 trains a day delivered passengers to Jackson. In the 1940s, people began driving here to ski the Whites with their lace-up boots and bamboo poles, riding uphill on rope tows powered by Model T engines. History lingers in century-old B&Bs, white-linen dining rooms, homey taverns and the funky frozen-in-time J-Town Deli Country Store.

Our base is the elegant 1869 Wentworth Inn, whose Swiss owner, Fritz Koeppel, melts hearts with his après ski fondue served in the bar beside the columned lobby. Hotel staff will point you toward the one of four downhill mountains with the best conditions that day – all are less than an hour drive away.

One of my favourite peaks in the Whites is actually two: Attitash and Bear. Together they offer up 120 hectares (300 acres) ribboned with 73 trails that wind through Bear's woods. That means lots of choices for a long day on slopes that see almost five metres of natural snow annually. Like most White Mountain resorts, runs aren't crowded and lineups are rare. There's also the new Nor'Easter Mountain Coaster, a wilderness roller coaster for adrenalin junkies to plummet on rails down through the trees.

Après? Cozy up with a local micro-brew and fine pub food in an armchair in front of the big brick fireplace in Jackson's Wildcat Inn and Tavern. This classic old New England establishment, with tables in a maze of rooms and old cross-country skis on the walls, is a popular hangout, with New Hampshire musicians performing live music every Tuesday on Hoot Night (Friday is fish fry night). Too relaxed for you? Tuck into wood-fired pizza and burgers at the Red Fox Bar and Grill, a lively sports bar.

You'll find yourself distracted on your first few runs on Wildcat, due to spectacular panoramas of Mount Washington. At 1,916 metres, it's the Northeast's highest peak. Ski magazine rates Wildcat tops for scenery in North America. And with no condos, it's wild all around. New England's most powerful quad chair whisks you up 1,219 metres in six minutes for access to 640 vertical metres of skiing. Bliss.

Après? Take a short drive out of Jackson to the factory outlet shopping destination of North Conway, which offers state-tax-free bargains at L.L. Bean, Carhartt, J. Crew and the other usual suspects. More important, that's where you'll find Moat Mountain Smoke House and Brewing Company. It's renowned for ribs, pulled pork sandwiches and a lineup of microbrews. New Hampshire has a thriving micro-brew scene, with more than a dozen breweries state-wide, including Tuckerman Brewery in nearby Conway. A personal favourite is Portsmouth's Smuttynose.

Slightly further afield, 40 minutes northwest from Jackson on the route back to Canada, Bretton Woods is New Hampshire's biggest ski area. It's a gentle hill more geared to families and, as usual, your fellow skiers will mostly be Bostonians; the Whites have been their ski hood since pre-car days, when they hopped the train north to stay at one of the region's Grand Hotels.

Après? Bee-line to the spectacular Mount Washington Resort, which owns Bretton Woods. It's one of only four remaining Grand Hotels, a sprawling white estate from 1902. Show up at 10 a.m. under the grandfather clock in the lobby for a great free tour of this National Historic Landmark or wander on your own through ballrooms, restaurants, cafés and bars. Don't miss the cupola – the Hemicycle – under which string quartets entertained, or the room of mementos from the 1944 Bretton Woods conference, when 730 delegates from all 44 Allied nations gathered to sign into existence the International Monetary Fund and what would become the World Bank after the Second World War. Omni Resorts took over ownership and recently spent $60-million bringing this historic palace of rosewood, gold leaf and Tiffany-glass luxury to its pre-Second World War splendour. Champagne would be an appropriate après in this setting.

The Jackson Cross Country Ski Centre is the best in the Northeast, with groomed trails throughout town and into the hills and woods. www.jacksonxc.org.

How to pack the essentials for any ski trip
January 7, 2011
What workout will help my downhill skiing?
November 6, 2011
Majestic Jasper National Park is paradise for freeskiers
October 21, 2011 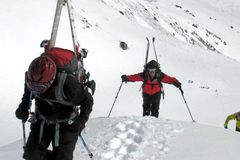