The mid-October pageant usually packs the Hilton Garden Inn in Tyler, Tex., and he wanted to stem the tide of room trashing that tends to plague the event.

So he scanned his guest list through Guestchecker.com, a new North American, industry-only database that reports and tracks hotel-goers who have displayed less-than-stellar behaviour.

Two names raised red flags: Another hotel reported they had trashed a room a year earlier.

"I called and told them they were going to have to find other arrangements," Mr. Whorton says. "They were furious and, of course, they had an excuse for everything and said the hotel they had stayed at before was lying."

It's understandable why hotels use a blacklist. Dealing with Charlie Sheen's well-publicized outburst last month at the Plaza Hotel in New York was no picnic. But blacklists have traditionally stayed within one hotel or one hotel chain. With the global reach and online memory of Guestchecker.com (names can stay on the database for four years), critics are waving red flags about the potential to infringe on a guest's privacy rights.

Since launching this spring, Guestchecker.com has attracted 7,000 hotel members, some of which are in Canada. The first site of its kind in North America, it comes on the heels of Britain's GuestScan.co.uk and Australia's GuestsBehavingBadly.com.au.

Hotels who subscribe to Guestchecker.com are supposed to inform guests that they use the database, says its president, Shane Burnett. Advertising the service, he says, can deter guests from stealing towels, smoking in non-smoking rooms or skipping on the bill. "We find they're actually on better behaviour."

Anyone written up on Guestchecker.com is notified by the service and the vast majority who have a complaint against them battle it down, Mr. Burnett adds.

Although sites like Guestchecker.com may work for nabbing the average bad guest, dealing with suite-thrashing VIPs requires more discretion - and the celebrity double standard.

Actor Randy Quaid and his wife, Evi, who fled to Canada after they were charged with burglary at their former home last month, were accused of leaving an unpaid bill of about $610,000 from an August, 2009, stay at the San Ysidro Ranch in California - a misdemeanour they denied at that time. In 2008, Moscow Hyatt Hotel dis-invited Paris Hilton and fined the heiress for graffiti damage to her presidential suite.

But whether guests are writing on the wall or packing the bathrobe,

hotels are taking a serious gamble with customer trust when they use an online blacklisting database, says Gabor Forgacs, a hospitality and tourism professor at Ryerson University in Toronto.

"A hotel used to be a place where people didn't have a problem giving [personal]information," he says. "Now, guests might say, 'If they don't treat my information in a confidential manner, why should I trust them with anything else?'"

Credit-card information or physical details are not entered into the database, Mr. Burnett says - just the guests' name, address and phone number.

Tony Pollard, president of the Hotel Association of Canada, says hotels should handle problems with the guest directly. "Now, with the security systems hotels have at their disposal, I don't consider [the need to broadcast problems]to be a major issue."

In Texas, Mr. Whorton says he picks and chooses the violations. "We're not going to report someone who's in the pool after hours, but we will report them for significant damage caused."

Mr. Burnett hopes that every member will take that measured approach. "One thing we don't want is someone travelling late at night and the hotel denies them," he says. "We don't want them sleeping in their car."

With a report from Sarah Staples 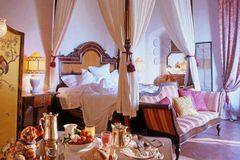 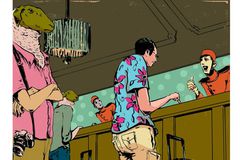