On my first full day in Saint Lucia, I laced up my hiking boots and set off on an excursion.

My destination wasn’t one of the Caribbean island’s two landmark pitons, the towering volcanic spires that rise side by side from the sea on the southwestern coast. Nor was it nearby Mount Gimie, the mountainous island’s highest peak.

I was on the other end of the island, headed to a hilly piece of land that soon will become a golf course, a beach resort, an enclave of multimillion-dollar homes and the first international outpost for a celebrated Canadian golf empire that opened more than a decade ago on an abandoned coal mine in Nova Scotia.

Cabot Saint Lucia on Point Hardy aims to be what Cabot Cape Breton is in Inverness, N.S. – a high-end, seaside golf experience that makes the long travel to get there worth it.

It also might be the beginning of a new identity for Saint Lucia as a luxury golf destination – and underscores the ambitions of Cabot, which is in full expansion mode despite the COVID-19 pandemic and travel industry angst. It also announced a golf resort project in British Columbia late last year.

No sooner had I set foot on the 375-acre property at Saint Lucia’s northern tip than I bumped into one of the architects who’s creating the 18-hole course – Ben Crenshaw, the golf legend whose output as a designer may be his legacy just as much as his two Masters titles and 17 other victories on the PGA Tour.

Crenshaw, making his first visit to the site, was talking with Bill Coore, his design partner of 35 years, while they stood on what will become the 12th hole.

With their backs to the wide fairway that tumbles downhill some 15 metres, they agreed to move a mound of dirt a few metres farther away from the proposed green site and add a wee bunker that Crenshaw described as “dastardly.”

I made my visit early last year, before the pandemic took hold and global travel sputtered. At the time, land clearing and shaping were under way and already the architects were discussing the nitty-gritty of their design.

They promised a longer chat with me when their workday was done so I moved on to explore the rest of the property, especially the jagged coastline where the course’s most scenic holes will be located.

I had seen Swedish photographer Jacob Sjoman’s photos of the course property and the coast when Cabot announced the project in 2019 and I was eager to see if real life matched up – it does.

Eight of the holes will play along the Atlantic Ocean, with a few of them requiring shots over small coves of azure seawater that laps against the rocky shore. The other holes also offer views and glimpses of the water.

The front nine ends with back-to-back par-threes, both on the ocean. A helicopter pad to ferry guests from the airport, thus bypassing the island’s twisting and pokey roads, isn’t far from the eighth tee box, over a crest.

It was this visual splendour that attracted Cabot founder Ben Cowan-Dewar to the site. It was also what prompted Coore and Crenshaw to sign on for their first Caribbean design – and their second collaboration with Cabot. (They also drafted the second course at Cabot Cape Breton, called Cabot Cliffs, which is now ranked as Canada’s best and has generated buzz worldwide.)

“It is very likely the most visually spectacular and dramatic site with which we’ve ever been given to work,” Coore said of the Saint Lucian site during our longer chat. Added Crenshaw: “I don’t know if there’s a site where you can see so many different parts of the ocean wherever you look – there are some spectacular vistas.”

But the heaving and undulating land leading to the water’s edge also poses an immense construction challenge. Some of the property’s steep grades aren’t conducive to golf, so Coore and Crenshaw are softening or flattening them with earth-moving equipment, while remaining true to their minimalist style. They tend to follow the natural lay of the land in their routing of the holes and bulldoze as little dirt as possible.

They also plan to create wide fairways and large greens to accommodate golf balls that will be blown around by the breezy conditions that are typical in the area. About half the holes and the driving range have now been fully shaped and the course is expected to open in 2022.

“If we can elevate the enjoyability and playability factors up somewhere close to the visual drama, then it’s going to be really good,” said Coore, who has designed nearly 30 courses worldwide with Crenshaw, including the mountainside Kapalua in Hawaii and another seaside stunner, Shanqin Bay in China.

Homeowners will enjoy the same vistas. Cabot Saint Lucia has plans for 320 homes scattered throughout the property, many nestled discreetly between fairways and all with ocean views. More than US$50-million worth of real estate was sold in the first phase of sales, Cabot said this month, and the second phase has launched. Families seeking multi-generational space and World Golf Hall of Famer Annika Sorenstam were among the early buyers.

Lot prices ranged from US$750,000 to US$2.6-million in the first phase, with those in the second phase beginning at $2-million and topping out at US$11-million. A boutique hotel near a crescent-shaped beach, a spa, a restaurant perched on a jut of land overlooking the beach and two more phases of homes are among the other amenities on the drawing board.

Access to the course, which is to be called Cabot Point, will be restricted to the homeowners, their guests and hotel visitors.

After taking me up to one of the property’s highest points, with the Atlantic in front of him and the Caribbean Sea visible in the distance behind, Cabot Saint Lucia principal George Punoose would not reveal the overall cost to develop the property as we scanned the sprawling expanse below us, but said projects of this scale typically run between US$200-million and US$300-million.

It’s a grand and ambitious venture – especially in the midst of a pandemic, when the future of travel remains uncertain. The risk doesn’t faze Cowan-Dewar, however. Both the Saint Lucia and Revelstoke, B.C., projects will come on stream after the pandemic ebbs and restrictions on Caribbean travel are lifted, and he believes the lockdowns may actually increase demand for safe retreats that offer a connection to nature, remoteness and large family spaces.

Saint Lucia covers those bases and has recorded low COVID-19 rates relative to the rest of the Caribbean and Central American sun destinations, with about 1,500 cases and 18 deaths as of early February.

“We know that people have gone to the mountains and the oceans for centuries for respite, so [we have] a little bit of a belief of that enduring,” Cowan-Dewar said from his Toronto base in a recent interview.

Cabot’s Saint Lucia property was once destined to be a golf course and resort when it was under the ownership of Raffles Hotels and Resorts. Jack Nicklaus had done a design and described his proposed course as “Pebble Beach Warm,” a tropical version of the iconic California links that tops the bucket list of many golfers.

But plans collapsed during the 2008 global recession and the property fell into the hands of a bank.

When Cowan-Dewar decided to expand the Cabot brand into a warmer climate to give Cabot Cape Breton devotees a winter retreat, he scoured the Caribbean for potential sites and worked with Canadian banks who had a major presence in the region.

After he and his wife examined the northeastern tip property in Saint Lucia, not far from the island’s tourist centre of Rodney Bay, he was smitten. He told the backstory on the second full day of my visit at a cocktail party that brought together all the Cabot Saint Lucia partners and local guests in a rented home high in the hills above the property.

“We went back [to Canada] feeling like we did 16 years earlier in Nova Scotia – that we just had to build a golf course in a place that’s a long way from our home,” Cowan-Dewar said.

Among those in attendance were Coore and Crenshaw, as well as Cowan-Dewar’s long-time (and deep-pocketed) development partner Mike Keiser and Saint Lucian Prime Minister Allen Chastanet.

Chastanet, who was educated in Quebec and is a former tourism minister in the Saint Lucian government, said the Cabot venture fits well with his island’s efforts to attract and cater to high-net-worth travellers and investors, including golfers.

The island has just one other course to speak of, Sandals Saint Lucia Golf and Country Club, putting it far behind Caribbean neighbours such as Barbados and the Dominican Republic.

The Prime Minister added that Cabot complements some of the island’s other upgrades under way to make it more livable for residents and inviting for tourists. Those improvements include a new terminal at the now-folksy airport, a major highway linking the north and south parts of the 43-kilometre-long country, and a horse-racing track that uses an old airport runway to park the private jets that fly in on big race days (in non-pandemic times).

“We’ve known for a long time that this is an amazing site, so obviously to bring the best here to develop the best is very exciting,” Chastanet said in an interview. “You need to be the best if you’re going to add another golf course to the Caribbean.”

The writer was a guest of Cabot Saint Lucia. It did not review or approve this article. 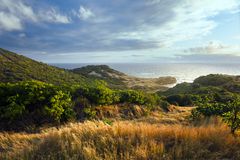