Fuelled by fierce competition and industry consolidation, the 10-year-old Epic Pass and its burgeoning nine-month-old rival, Ikon, now cover more than 100 resorts stretching from Ontario to Australia and from the Alps to Japan. New additions to both passes have come fast and furious in recent months, with Epic adding 20 operations over the past year – including six resorts of the Canadian Rockies properties – and Ikon expanding its initial clutch of 23 resorts by more than 60 per cent.

What’s new on the ski slopes this winter

Never before have snow-sports enthusiasts been able to sample so much worldwide terrain for so little: At press time, the top-tier adult versions of Epic and Ikon cost US$929 and US$999 respectively.

Then there are North America’s other two passes, from the Mountain Collective and Powder Alliance, which offer less costly variations on the all-access theme.

A parade of pricing and access options, gives skiers of all stripes even more choice.

Keeners, for instance, can jump straight into the action as I did at Keystone. Beginner and intermediate skiers can build skills and confidence at smaller hills closer to home before hitting behemoths such as B.C.'s Whistler Blackcomb and Colorado’s Aspen Snowmass. Road-trippers can spend a day here and a month there, while families can opt to target school breaks, long weekends, or less-costly weekdays.

Speaking of spoilage, does it get more decadent than munching on warm chocolate-chip cookies while riding an escalator to an artificial skating rink? I ask myself this rather surreal question while washing down said baked goods with a Moscow mule on the patio of the Toscanini Umbrella Bar, one of several après-ski options surrounding the impeccable ice surface at the heart of Beaver Creek’s fairy light-festooned village.

This kind of opulence almost justifies the cost of adult daily lift tickets at Beaver Creek and Vail – they often top US$180 – as well as the maddening fact that, according to Vail Resorts, the average Epic Pass holder skied for just 3.4 days during the 2017-18 season. Many one-percenters, it seems, are indifferent to ski-pass value.

Still, there’s plenty for the rest of us to love about Beaver Creek. Beyond the complimentary treats, served by uniformed chefs at the base of the six-person Centennial Express Chondola, the triple-peaked resort’s groomed terrain is arguably the best on Earth. Its 320-plus hectares would cover Quebec’s Mont Tremblant in its entirety – and then some – with steep World Cup descents such as Birds of Prey proving surprisingly manageable for skiers not named Lindsey Vonn or Bode Miller.

I’m inhaling neither cookies nor cocktails in Colorado as I hike up and across the penultimate peak in Breckenridge’s stunning string of 10 summits. What I do have is an oxygen canister, which I pull on repeatedly as I near my goal: The “Back 9” series of chutes.

At nearly four kilometres up, my fight with gravity turns into a love affair as soon as I point my skis down one of Peak 9’s nameless descents. My Breck Guide lets out an encouraging “Whoop!” as his charges race toward the treeline below, where the E-Chair, one of 32 lifts, provides a less strenuous way to climb back up a portion of Breck’s 1,036 vertical metres.

I let out a whoop of my own a few hours later while sampling spiced, single-barrel and port-cask whiskeys in the Breckenridge Distillery’s tasting room. The cockle-warming stop is part of the Breckenridge Heritage Alliance’s two-hour “Swinging Doors Saloon Tour,” which recounts the rampant drunkenness, prostitution and other seedy aspects of the 159-year-old town’s early days.

These days, there isn’t a red light in sight. The picturesque Main Street, steps from the base of the BreckConnect Gondola, is lined with boutiques, fine dining and a four-block Arts District. Still, the frontier flourishes that remain – inset saloon doors, for instance, and Wild West-themed signage – make it clear that I’m not in Beaver Creek any more.

Fat flakes fill the air as we retrieve our rental gear from Stowe Mountain Lodge’s ski concierge and head to the nearby Adventure Center, where my two daughters kick off March Break with the Stowe Mountain Snow School.

This cunning parental escape coincides nicely with the opening of the Sunny Spruce chair, which carries my wife and me up its namesake peak. Several powdery laps later, we take the Over Easy Gondola to Mount Mansfield, Stowe’s principal peak and Vermont’s highest at 1,340 m.

Again, we arrive just in time for the wind-delayed opening of the main gondola, which whisks us up to the Cliff House Restaurant for lunch. We watch the snow pile up through floor-to-ceiling windows, then burn off some of our Vermont Farmhouse Cheese Board by storming down Chin Clip, Nosedive and Hayride.

Halfway down the latter, I stop beside a random snowboarder. Our eyes meet, we nod and share an impromptu fist-bump. These are the best conditions of the season, so I have to wonder: Are his kids in ski school, too?

I’m no stranger to Whistler Blackcomb’s vastness: The 30 square kilometres of stunningly varied terrain encompassing 16 bowls and three glaciers; the incomparable thrill of riding the world’s highest gondola, the Peak 2 Peak, between its namesake mountains; and the 600-plus shops, lodging options and dining and drinking establishments in its three villages. As I watch the sky darken from the balcony of my luxurious Nita Lake Lodge suite, my senses still buzzing from dinner at the six-month-old Il Caminetto restaurant, the $1.39-billion Vail Resorts paid for Whistler in 2016 seems like a pretty decent deal.

On this visit, however, an enchanting surprise stands out. Seeking shelter from an après-ski April shower, I duck into the Audain Art Museum, an arrestingly angular structure tucked into a spruce grove along Blackcomb Way. The ground-floor Permanent Collection, which includes nearly 200 works ranging from Northwest Coast First Nations masks to paintings by B.C. luminaries such as Emily Carr and Jeff Wall, is impressive enough, but a temporary exhibition on the second level is like nothing I’ve ever seen.

Or worn, for that matter. Seconds after donning Shawn Hunt’s Transformation Mask, a collaborative work between the Heiltsuk artist and Microsoft Corp., the stylized raven’s head suddenly splits open.

With 15 centimetres of snow having blanketed Fernie’s five bowls overnight, the serenity of Lizard Creek Lodge’s slope-side ski lockers surprises me. Then again, this isn’t any Thursday morning in April. It’s the morning after Hot Dog Day, which for more than 30 years has compelled revellers to don outrageous retro garb and congregate on the panoramic patio of the Rusty Edge tavern to fête both spring’s arrival and 1984’s Hot Dog…The Movie.

The 2010 release of Hot Tub Time Machine, an ode to the eighties filmed in Fernie, only fuelled Hot Dog Day’s fire.

With many celebrants presumably preoccupied by the local thrift store’s next-day returns policy, I join three new friends in hiking up the far northern reaches of the resort’s 1,012 hectares. Recent snowfall has pushed Fernie’s total close to the 12-metre-mark, and up on Snake Ridge it remains gloriously untouched.

My first turn reveals how quality trumps quantity when it comes to first tracks. The lightest imaginable powder blows up over my goggles, but who needs vision when skiing feels this sublime? The rushing alpine air whisks the flakes from my face as I congratulate myself on choosing to preview one of the six Resorts of the Canadian Rockies properties that will join the Epic Pass for the 2018-19 season.

Which multiresort ski pass is right for you?
Subscriber content
October 10, 2018 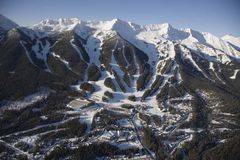 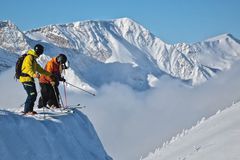