Raise your hand if your average day goes something like this: Wake up, check phone, coffee, breakfast (barely), check phone, rush to work, workmeetingphoneworkphonemeeting, rush home, family time, phone, TV, lie in bed wondering why your brain won’t shut off.

What if it went like this? Wake up, pancakes and campfire coffee, 14-mile descent through narrow canyons, past badlands, red sand dunes and a superbloom of desert wildflowers. Arrive at the lowest point in North America. Break for lunch. Tour a 180-metre-deep volcanic crater. Pedal past salt plains. Gorge on tacos. Doze off to the sight of a thousand stars and the sound of the most heavenly nothing.

Better, right? It is possible – and you don’t need to use too much vacation time to make it happen.

Here are five North American destinations where you can break from the routine and have an unforgettable two-wheeled adventure in less than a week.

Europe, by train: Renewing the romance of rail travel

Moab is a town of 5,000 sandwiched between Canyonlands and Arches National Parks, 3½ hours southeast of Salt Lake City. It’s known for its mountain-biking trails, including the Slickrock Trail – a hypertechnical, approximately-18-kilometre loop on Navajo sandstone – and the Whole Enchilada. The area draws cyclists from around the world, not just for the riding, but for the 360-degree views of rust-coloured rock towers, arches, canyons and caves that will make you swear you’re on Mars. Riding through that expansive landscape is exhilarating, but the White Rim Trail offers the true getaway: a 100-kilometre route that runs 400 metres below the Island of the Sky mesa, and provides a close-up look at narrow canyons, Puebloan ruins, and the Colorado and Green rivers.

“When you’re on the top of the mesa, looking down into the canyon, everything seems so far away. But down on the trail, you feel like you’re in the middle of it, and in the middle of nowhere at the same time,” says Chris Wamsley, a guide with Western Spirit Cycling, which offers a four-day White Rim Trail beginner’s mountain-bike tour of the trail. You bring your shorts and bottles of water and they take care of the rest.

There’s a moment when, after kilometres of climbing, you finally crest MacKenzie Mountain, and Pleasant Bay comes into view, that will make your breath catch in your throat. It’ll happen again a couple days later, as you’re careening down the south side of Cape Smokey, feeling like you might just fly right over the guardrail and into the sea. While the superscenic, 320-kilometre Cabot Trail has its share of tough climbs and hair-raising descents, it also has some calmer moments: a fish dinner in tucked-away Dingwall, the magical hike out to White Point with views of the peaks in Cape Breton Highlands National Park, and plenty of music and libations to wash away the memory of those big climbs. Nova Scotia–based Freewheeling Adventures offers a five-day tour of the trail.

Pedal the pristinely paved roads around Upper Arrow and Kootenay Lakes for soothing hot springs, beautifully restored old mining towns, alpine lakes and river valleys, all set against a backdrop of snow-capped peaks. Riding from Revelstoke through the Kootenays has you cycling through some of the country’s most breathtaking scenery, minus all the heavy tourist traffic.

“It’s a really cool area that seems to have been forgotten or bypassed,” says Peter Weiland, owner of Rocky Mountain Cycle Tours, which offers a six-day tour of the area. “It feels like you’re on an island in the mountains. My favourite part is the ride from New Denver to Kaslo, which takes you along a beautiful narrow winding road – like one of those roads you might ride in Europe. It’s a climb up to Summit Lake, and then you’re rewarded with a 27-kilometre descent into Kaslo.”

The largest national park in the contiguous U.S. wows cyclists with a roller-coaster ride of screaming downhills through narrow canyons, big climbs, ghost towns, and stunning sand-dune sunsets. Cruise the salt flats of Badwater Basin, visit the 180-metre-deep volcanic Ubehebe Crater and check out Mesquite Flats Sand Dunes and other locations that doubled as the desert planet Tatooine in A New Hope and Return of the Jedi.

”My favourite section of road is between the Ubehebe Crater and Furnace Creek. The road hugs the east side of the valley and provides an expansive view to the west. You can see for miles and miles and miles,” says Arlen Hall, a guide with REI Adventures, which offers a three-day tour of the park. “With so much life and activity maybe Death Valley is a misnomer. It’s still my favourite ride in North America.”

Ride a fast, flowy single track through dense forest, camp on the edge of alpine lakes in the shadow of Mount Bachelor – a 2,740-metre-high stratovolcano in the Cascades Mountain Range – and get to know the local brewing scene. That’s what’s in store when you visit Bend and the 1.8-million-acre Deschutes National Forest in central Oregon, an area that boasts challenges for beginner and expert mountain bikers alike.

Escape Adventures offers a five-day MTB tour of the area. “The Newberry Caldera is probably my No. 1 ride,” tour co-ordinator Kevin Ford says. “You’re riding right around and on an obsidian lava flow. You’ve got views of the Three Sisters mountains. You’re not that far out from Bend, but you feel totally removed.”

While in Muskoka, step out of the cottage and into the wild 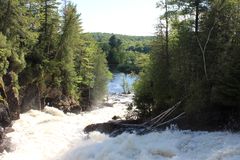 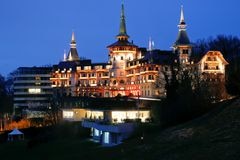 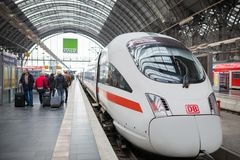