You see them at many touristic sites: a crowd of people trailing a guide, who waits at every designated stop for the flock to reassemble. I never go on that kind of overgrown school trip, but with a small group or solo, and with a well-informed leader, a guided tour can be the best way to get to know a place in a short time.

I wouldn’t have attempted a two-day trek through Morocco’s High Atlas mountains without expert help, for example. Standing on the arid slope of a valley near Imlil, a 90-minute drive south from Marrakech, I couldn’t confidently spot which part of the dusty, scree-covered ground counted as the trail. It was the first of many things I would not have seen or understood if I had been hiking without help.

It was the fall shoulder season, and I was the only paying customer in our party of three, organized by Aztat Treks. Abdul was my guide, and Samir cooked and tended the load-bearing mule that always went faster than I did, invariably disappearing with Samir up the trail ahead.

Many go to the High Atlas to climb snowy peaks such as Mount Toubkal. I chose an easier hike, through two ruggedly beautiful, winding valleys. The rocky ground and low rainfall support only clumps of juniper and hardy grass, as well as a tough-stemmed evergreen plant that Abdul said is used by the locals to make brooms.

Each valley has a green belt lower down, dotted with tiny villages and sculpted with terraces for growing corn, barley, olives and walnuts. Valley agriculture, Abdul told me, depends on a communal irrigation system, in which each plot-owner gets to open the irrigation gate to his property for 90 minutes a week. The hamlets were close enough to each other than we could see three or four from almost any point in our journey.

Abdul and Samir were both Amazigh – Berbers – who live in one of the villages. Abdul, at 25, had never been out of Morocco and had spent just enough time in Marrakech to confirm his love for his village. He asked me few questions and seldom began a conversation, but when I asked him something, he answered thoroughly. Over two days, he gave me a fascinating account of the land and his people’s way of living on it.

The Berbers are the Indigenous people of Morocco. They maintain their own customs, settlements and languages, one version of which became an official language in 2011, though it has been spoken in the country since time immemorial. Tensions between the Berbers and Arabic Moroccans whose forebears came from the east have existed since the eighth century. A Berber political party was banned by the central government in 2007.

Each village supports its own mosque and imam, with help from the national government. Abdul pointed out the slender minarets, as well as a woman tending a short, grey, peaked tower next to her house. That’s a family hammam, he said, made of mud and just big enough for one person to bathe at a time.

Sounds travelled through the valley as in a natural amphitheatre. Above the scraping of our boots on the rocky path, I could hear the crying of goats grazing further up the hillside, and the distant sounds of drumming and women singing. Abdul said that a wedding was going on in one of the villages, on the second day of a traditional three-day celebration.

Berber girls often marry at 16 or 17, he said, sometimes after a brief acquaintance. His sister married a man from Marrakech after three formal visits in her parents’ home, of no more than 90 minutes each, after which the man appealed to her father for her hand. Abdul himself has no interest in city girls, who are too materialistic, he said, and would prefer to know his partner for at least six months before an engagement. But to marry, he needs a better room, and enough money to buy wedding clothes for two. He didn’t say whether he would expect his bride to follow the local custom of staying indoors nearly all day.

As we rounded one ridge, we met an earth-moving machine, clawing at the trail ahead of us. There’s little traffic on roads in the valley, Abdul explained, but they’re gradually being improved to tempt more tourists to visit the guest houses popping up in the villages.

People do hike these valleys without guides, though I didn’t meet any DIY travellers. It’s possible to buy guide books and maps, and a phrase book to ask for the next guest house. Anyone trekking alone would have to carry everything they needed – there are no shops in the valley – and would miss out on the textured pointers and personal narrative I got from Abdul.

At the end of our first day, the elevation had increased by 630 metres – a lot less than a hike up Toubkal, though the heat and lack of shade along the way made it a good day’s trek. We walked into the terraced village along snaky paths no wider than the ones in the hills. Boyish shouts came up from under the tree canopy further down the slope: A soccer game was in its last minutes. When the shouting stopped, the players and others walked up the paths that criss-crossed the hillside. Men in kaftans talked on their cellphones, babies passed in slings on their mothers’ backs, kids played or ran after chickens.

Within a half hour, however, everyone was in their cosy but extremely basic houses, many of which held livestock on their ground levels. There was absolutely no activity left outside. Abdul confirmed that the village had no café, or any other place to congregate, besides the paths and the mosque.

“This is the life!” he said with an embarrassed laugh, repeating a phrase he used whenever we talked about some aspect of valley life that seemed boring or deficient, to him as much as to me. Committed as he was to village ways, he knew how they looked from outside.

Abdul had said that everything is safe in the unpoliced villages, and it felt that way to me, but he had to send someone for the key to the terrace of our guest house. We climbed up there to find only an expanse of bare concrete, some of it crudely molded or decorated by the workmen, and with bits of rebar sticking out of the floor. People in the valley often begin building before they have the money to finish, Abdul said, pointing to a rough structure below us that had been in progress for over a year.

Our guest house was really a two-level concrete and cinder-block shell, with almost no furniture. Thin mattresses lay on the floor of a few hastily-painted guest rooms. There was no staff and no kitchen; Samir cooked us a tagine on his camp stove. I went to sleep imagining I was hearing the river below us, but it was actually the water coursing along the chutes from the irrigation pools above.

The next morning, as Samir and the mule vanished up the trail, I asked Abdul how he had learned the route we were following, which I still found hard to trace. “From the mule,” he said. He had started in this work doing Samir’s job, and the mule had already memorized the trails.

We passed a shady walnut grove, where adults hit the branches with sticks to dislodge the nuts, which children collected from the ground. Berbers who leave this kind of work for the city often end up in low-paying jobs, Abdul said, because of ethnic discrimination. He said he had told his boss he would no longer accept Arabs – including non-Berber Moroccans – as clients, because he finds them haughty and hard to please. It seemed a real sacrifice for a man who lives on seasonal earnings.

We reached a gully, on the other side of which Abdul pointed to clusters of stones on the ground – a graveyard. In the Berber tradition, he explained, the dead are washed, taken to the mosque for prayers and then buried immediately in shallow unmarked graves. The stones are merely to show where not to dig, he said. There’s no special veneration of the spot, which I would never have recognized as a cemetery. “When you’re dead, you’re finished,” he said, summing up the Berber view.

Samir had already scouted a place for our lunch, under a low concrete bridge. I was about to question this picnic spot, when I turned and saw the spectacular view down the length of the valley. Samir laid out far too much food, as is usual in Morocco, covering a wide platter with Moroccan salad, bread and reddish-green grapes the size of small plums. He poured out the syrupy-sweet Moroccan tea in traditional fashion, raising the cascading teapot far above the cup.

I had thought Imlil was a tiny place before we left it, but when we trudged back into it at the end of our hike, it seemed almost like the big city. It had hotels, cafés, tourists selecting gear in guide shops and a bustling open market. I shook hands with Abdul and Samir, who accepted their cash tips modestly, without looking at them.

What would I have seen without their help? Rugged valleys, picturesque villages, locals who eyed me with wary curiosity, children who ran up to try out their few words of French. Not bad, but not nearly as rich and memorable as my guided hike.

The writer was a guest of Air Canada, which did not review or approve this article. 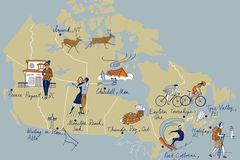 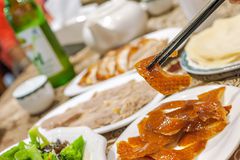 Soak up Lima’s artistic energy in the bohemian-chic Barranco district
May 23, 2018 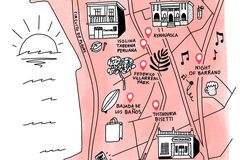