Designed from the outset to be pedestrian-friendly, the 19th-century-era blocks of Portland, Ore.’s downtown measure about 60 metres by 60 metres – about five times shorter than the distance between some in Manhattan. With more than 500 restaurants and bars, independent shops, galleries and cultural institutions and even a full city block crammed with food carts, these 2.58 square kilometres (slightly more if you count the neighbouring Pearl District and Chinatown, strolling to which still won’t put you over your recommended 10,000 steps a day) pack in all the ingredients that make this funky, foodie, West Coast city such a draw.

From the modish forest-green couches in the lobby to oversized art works reminiscent of rolling fog, every decor element at the Hi-Lo Hotel pays chic homage to its Pacific Northwest location. Situated in the historic Oregon Pioneer Building, a 108-year-old structure that was the city’s first concrete building (it’s also home to Portland’s oldest restaurant, Huber’s), the six-storey, 120-room property features original details such as mail chutes that date to its earlier life as an office building, along with reclaimed wood and Oregon parquet flooring; these juxtapose nicely with the exposed concrete walls and modern furnishings and light fixtures. Custom plant-based bath products from local purveyor Maak Lab and a house cider, beer and wine program in collaboration with regional producers Reverend Nat’s, Royale Brewing and Chehalem Winery, respectively, make the Portland-centric vibe a multisensory experience.

Owned by James Beard-winning husband-and-wife team Greg and Gabi Denton – the couple met two decades ago working at the iconic Terra restaurant in California’s Napa Valley – Bistro Agnes is so classically Parisian it almost comes full circle back to edgy. While Superbite, the star-chef couple’s previous restaurant in the same space, was all about experimental small plates, Agnes offers simple perfection: onion soup gratinée, salade Lyonnaise, steak frites and other quintessential French dishes executed flawlessly. Don’t miss the burger: Described by Greg Denton as a “Frenchier version of the American classic,” it comes swimming in a pool of truffled bordelaise. You’ll need a knife and fork to eat it, but that only serves to draw out the pleasure.

On the sidewalks of downtown, it’s easy to forget just how much green space Portland has (92,000 acres, including one of the largest municipal parks in the United States). If you need a reminder – or a drink and a bite – head up to the 15th floor of the Nines Hotel where you’ll find Departure, a rooftop bar and restaurant with stellar views of Portland’s lush West Hills neighbourhood, the river and surrounding mountains. With Asian bites, including sushi and a full vegan menu, by former Top Chef contestant Gregory Gourdet, and inventive cocktails, it’s clear why this hotel bar is a favourite among locals too.

There’s nothing quite like losing yourself while browsing through an independent bookstore – but the phrase takes on literal meaning at Powell’s City of Books, a shop so large it takes up a full city block. Printed, colour-coded maps come in handy if you’re trying to navigate through Powell’s 3,500 different sections – the rare-book room upstairs houses some 9,000 volumes, the oldest of which dates to 1480 (it’s open daily from 11-7 or by appointment) – or let the cheeky, handwritten staff-recommendation notes propped on shelves throughout the store guide your trail.

As much a feminist manifesto as it is a clothing line, Wildfang’s tomboy-branded women’s clothes aim to make menswear-inspired fashion more everyday. Founded by two Nike alums – the running-shoe giant is based in Portland – Wildfang is best known for its black and white “Wild Feminist” Ts, but also sells relaxed blazers, trousers, shorts and button-downs along with T-shirts and tank tops with slogans such as “Shot Caller” and “Seldom Well Behaved. And lest all that shopping make you thirsty, there’s an in-house bar that sells canned beer and wine – including Windfang’s Get It Girl, a riesling-gewurztraminer-pinot gris blend made in collaboration with Oregon-based Union Wine Co. (profits from which go to Planned Parenthood).

A full block of lily ponds, lotus flowers and traditional Chinese pavilions, it wouldn’t be a cliché to call the walled-in Lan Su Garden an oasis. Hidden among high-rises and located in one of the grittier sections of downtown, these gardens were built by 65 visiting artisans from Portland’s sister city, Suzhou (the garden’s name is a mashup of the two cities’ names but has a double meaning of Garden of Awakening Orchids). The grounds are home to more than 400 plant species – 90 per cent of which are indigenous to China – exhibits, demonstrations and performances dedicated to Chinese art and culture, and a tea house.

Dating back to 1974, the festival-like Portland Saturday Market is the largest continuously operating outdoor fair of its kind in the United States. Situated on the bank of the Willamette River, this open-air market runs every weekend (despite the name, this includes Sundays too) from March until Christmas, with two concerts as well as children’s programming each day. Browse locally made crafts such as colourful decor items made from reclaimed wood at Second Life Timber and cheeky Star Wars parody prints (Darth Vader sipping tea – pinky out – or two Storm Troopers riding a tandem bike through a field of wildflowers) from Kyle’s Gallery or refuel with local beer, cider and a variety of snack offerings, from empanadas to pad Thai, at the outdoor food court.

The writer travelled as a guest of Marriott International. It did not review or approve this article.

Neighbourhood stroll: Where to eat, stay and shop in St. John’s
September 27, 2018 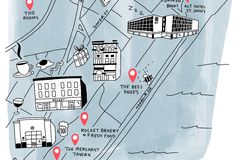 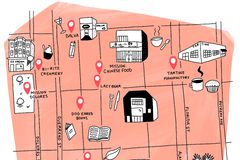 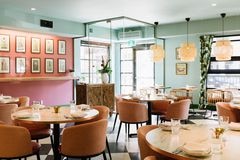