Music lovers trekking to summer festivals often incorporate more adventures into their trips than just the weekend events themselves. With that in mind, a guide to six unique annual happenings comes complete with music-friendly hotels, melodious places for food and drink and other diversions guaranteed to hit the right notes for the discerning musical traveller.

Come for Jeff Goldblum and the Mildred Snitzer Orchestra, stay for Neil Young, Jack White, Kings of Leon, Gary Clark Jr. and Alanis Morissette. Run by Coachella promoters Goldenvoice, the second annual event leans to guitar rock – a genre somewhat out of fashion these days. Excellent alternatives come in the form of New Orleans soul queen Irma Thomas, country singer-songwriter Margo Price and the likable actor Goldblum, whose jazz-piano side hustle has just earned him a record deal with the classic Decca label. June 23 to 24, Brookside at the Rose Bowl, Pasadena, Calif., arroyosecoweekend.com

Where else to go: Not only is McCabe’s Guitar Shop the spot for acoustic and folk instruments in the beachfront city of Santa Monica, the music store also hosts intimate concerts. While past performers include Jackson Browne, Joni Mitchell and Stan Rogers, this summer’s schedule accommodates Tom Paxton, Peter Case and Joan Shelley.

Where to eat and drink: Pappy & Harriet’s Pioneertown Palace is worth the drive to the desert, both for the barbecue and for the live music. (Nearby Joshua Tree National Park is a place of rugged natural beauty well-known to fans of U2 and Gram Parsons.)

Where to stay: Recommended local lodging includes The Langham Huntington and the Bissell House Bed & Breakfast, but rock ’n’ roll enthusiasts with a sense of history might wish to hunker down at Los Angeles’s Sunset Marquis (which has its own recording studio) or the Andaz West Hollywood, a Hyatt property known as the Riot House when members of the Rolling Stones, the Who and Led Zeppelin were throwing televisions off balconies. Presumably the reception is better these days.

Suitably, the man who wrote On the Road Again hosts an annual Independence Day concert that has moved around the Lone Star State a bit since its inception in 1973. This summer, the 85-year-old Red Headed Stranger invites not only country-music mavericks Sturgill Simpson and Margo Price to Austin, Tex., but also seventies holdovers Asleep at the Wheel, David Allan Coe, Ray Wylie Hubbard and Billy Joe Shaver. This isn’t “new country” or “bro country.” This is old country and weird country and apple-pie-and-pass-the-doobie country. July 4, Circuit of the Americas racetrack, Austin, Tex., circuitoftheamericas.com

Where else to go: No doubt temperatures will be hotter than a $2 pistol when the country music icon holds his annual shindig. Things will have cooled down in early October when the Austin City Limits Music Festival hosts a diverse lineup scheduled to include Paul McCartney, Metallica, Camila Cabello, Childish Gambino, Brandi Carlile and Arctic Monkeys over two three-day weekends in Austin. (Oct. 5-14)

Where to eat and drink: At C-Boy’s Heart & Soul, the hot dogs are free on Sundays, which is when the juke joint offers its health-code-be-dammed game of chance involving random chicken droppings and bingo. The birds are back in the coop for the rest of the week, allowing for regular appearances by such blues legends as Jimmie Vaughan, Paul Oscher and Miss Lavelle White.

Where to stay: Rooms at Hotel Saint Cecilia come with essential amenities – and by “essential,” we mean Rega turntables and Geneva Sound System stereos. A lending library is stocked with vintage LPs and a collection of rock biographies, and a concierge can arrange a guitar loan. Buddy Holly never had it so good, but you can.

Like its counterparts in Vancouver, Winnipeg and Edmonton, the convening in Calgary defines “folk festival” in the broadest of terms. Mainstage attractions this summer include the retro-folk-duo harmonies and banter of the Milk Carton Kids, the breezy guitar-pop innovations of Bahamas, the hip hop and electronica of A Tribe Called Red, the Steppin’ Out eloquence of Joe Jackson and the defiant, compelling voice of singer-songwriter Neko Case. As well, intimate workshop collaborations between artists make for one-of-a-kind experiences. July 26 to 29, Prince’s Island Park, calgaryfolkfest.com

Where else to go: Satisfaction and musical interaction is guaranteed at Calgary’s National Music Centre, a five-floor place of exhibitions, concert venues and a mobile recording studio once owned by the Rolling Stones. (nmc.ca)

Where to eat and drink: Sadly, the beloved Wine-Ohs Bistro & Cellar is now closed. Still, the city’s downtown “Music Mile” is flush with alternatives, including the Ironwood Stage & Grill, a venue for nightly live music with a concert-themed menu. (ironwoodstage.ca)

Where to stay: The festival offers special rates for attendees at a variety of downtown hotels, including the Westin Calgary, which is where the performers often stay and where after-show parties have been to known to happen.

Some call Detroit “Motown,” a portmanteau of motor and town, and the name of a hit-making record label of the Smokey Robinson kind. Kiss, on the other hand, named a song Detroit Rock City. Whatever its nickname, Michigan’s largest city is home to a riverside festival of indie-rock heroes and select representatives from the worlds of hip hop and R&B. Headliners include Bon Iver and the National (both of midwestern origin), along with Canadian imports Alvvays and the ascendant Daniel Caesar. July 28 and 29, West Riverfront Park. (mopopfestival.com)

Where else to go: The headquarters of Motown Records was once called “Hitsville U.S.A.” for the label’s string of chart toppers in the 1960s. Today, the office and studio where it all happened is in such remarkably preserved condition at the Motown Museum one can almost detect the sweet waft of Marvin Gaye’s cologne. (motownmuseum.org)

Where to eat and drink: Baker’s Keyboard Lounge claims to be the world’s oldest operating jazz club. And while Chicago’s Green Mill Cocktail Lounge would dispute that boast, Baker’s piano-shaped bar, catfish-favouring menu and history of legendary artists is legitimate.

Where to stay: Detroit’s downtown has undergone a revival of late. New hotels satisfying the need for rooms include the Foundation Hotel (in the former Detroit Fire Department Headquarters) and the Siren (occupying the former office building of Wurlitzer, makers of organs and jukeboxes). Further afield, on Mackinac Island in northern Michigan, the luxurious Grand Hotel (where Thomas Edison’s newfangled phonograph was first demonstrated) has jazz and classical musicians on staff.

Cozy in size and charm, the second-annual cottage-country event offers a unique multivenue experience in the heart of Ontario’s Muskoka region. Canadian artists Rose Cousins, Royal Wood and the Good Lovelies are among the singer-songwriters and roots-music artists performing in a park, a music barge and the town’s historic opera house. Patrons investing in the VIP package are invited to a cottage-set concert by a secret performer – last summer, it was the Skydiggers. Aug. 3 to 5, Gravenhurst, Ont., sawdustcitymusicfestival.com

Where else to go: The legendary Kee to Bala concert venue and bar located on Lake Muskoka has played host to everyone from Count Basie to the Tragically Hip. This summer’s schedule includes patio-lantern appearances by Kim Mitchell, July Talk and, on the August long weekend, the Trews.

Where to eat and drink: The owner-operators of The Oar restaurant are dedicated music supporters who just happen offer a mean wild boar, venison and blueberry burger on their menu. Live music is common, as are wedding receptions.

Where to stay: The acoustic guitar in the common room of the Inn on Bay bed and breakfast in Gravenhurst is in tune and available for strumming.

Established in 1954 by socialite Elaine Lorillard, the Newport Jazz Festival has a storied past that includes an incident in 1960 involving blues artist Muddy Waters, the National Guard and a disturbance caused by spectators. Waters performed Goodbye Newport Blues, and, for one year, the festival was suspended. Returning in 1962, the white-tent affair now welcomes bebop and other jazz artists, along with innovators in other genres. Among this summer’s performers are newcomer Andra Day, Robert Glasper, Pat Metheny, the Nat King Cole enthusiast Gregory Porter and legendary drummer Tony Allen. Also on board is George Clinton & Parliament Funkadelic, zooming in on the mothership for what funk-maestro Clinton says will be his final trip ever with the group. Aug. 3 to 5, Fort Adams State Park, Newport, R.I., newportjazz.org

Where else to go: Newport Jazz’s sister event is, of course, Newport Folk Festival (July 27 to 29). Highlights include Valerie June, St. Vincent, Jason Isbell and the ubiquitous Margo Price, along with Canadians Colter Wall and Tamara Lindeman’s Weather Station.

Where to eat and drink: Seafood is plentiful in town, but for spirits try Newport Craft Brewing and Distilling Company, the first distillery in 135 years in a state rich in rum tradition. Beer and rum tastings cost $9 and $10, respectively; Yo-ho-ho’s are complimentary.

Where to stay: Yachting capital Newport is not without impressive lodging options. For something more melodious, the Verb Hotel, 99 kilometres away in Boston, is a music-themed boutique inn near Fenway Park, a historic baseball stadium also used for concerts. Up to bat this summer are Jimmy Buffett, Foo Fighters, Billy Joel and Pearl Jam.

Editor’s note: An earlier version of this article incorrectly said a new temporary exhibit honoring k.d.lang would be unveiled July 11. In fact, it closed June 1.

An inside look at Golden Plains, one of the world’s most interesting music festivals
June 13, 2018 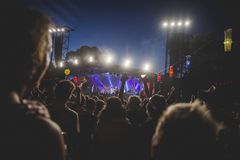