Standing precariously on an island, my canoe partner Paul and I peered out at the middle channel of the Madawaska River, trying to see the way through the churning mess of whitewater and rocky ledges. “Really, it’s pretty simple, a small but technical set of rapids,” said our volunteer leader Alan Lambert, who, along with Mike Johns, was guiding our group at the Wilderness Adventurers outdoor club’s whitewater-training weekend. It furthered a long-standing tradition of paddlers teaching other paddlers on the mighty Madawaska, Ontario’s greatest teaching river. For more than 35 years, volunteers with the Wilderness Adventurers have passed along their knowledge and skills to new members, creating a community of skilled canoeists.

According to Mike and Alan, all we had to do was hit the easy first eddy at the top, turn out into the current and drive hard into the whitewater drop through the rooster-comb-shaped wave to hit the eddy below at precisely the right angle. (An eddy is a resting place on the river with an upstream current.) However, if we miss the second eddy, we’d go through massive waves right into a rock-studded drop. If we miss the first eddy, we’d almost certainly tip on the first rocky drop and body surf the second, surrendering our canoe and our lives to the river’s whims.

Lunch felt like a dead weight in my stomach. Apparently, we were actually going to do this.

Mike and Alan proved it could be done, approaching the rooster wave at an odd angle, but plowing through and easily ending up safe in the eddy.

Paul and I went next, me in the stern, and immediately things went wrong as we hit the first eddy far too low, the current sucking us backward toward the first drop, on the most dangerous side of the river. If we had paddled forward hard, we could have and made the eddy. Instead, I glanced over my shoulder and saw the looming, frothing disaster behind us and reverted to Plan B. We were going down! Backward! I lined the canoe up to take the one-foot rocky ledge as straight as possible and we went over. Seconds later, we blinked, amazed to find ourselves still upright in the canoe.

Somehow, in the frothing madness before the second drop, I managed to turn the boat around and straighten it, just in time to hit the ledge facing forward at the most rocky section of the rapids, exactly where we weren’t supposed to go. I felt the horrifying sensation of canoe scraping rock under my knees. We arrived at the bottom, miraculously still in our boat. I exhaled, heart beating madly. My partner raised his paddle overhead, in victory or relief, I couldn’t tell.

Then we promptly tipped over, the strong eddy line snatching our canoe out from underneath us and plunking us in the chilly water.

We had been warned by Mike and Alan. High water levels made for faster current and hidden rocks. The eddy lines, which form between the downstream current and eddies on the river, were sharper. “The water is unforgiving,” I’d said, and Mike agreed.

Steering a whitewater canoe is like riding a bicycle. We leaned into the turns, but also had to remember to pull out of our lean before tipping right over.

The invigorating shock of the cold water penetrated my wetsuit as we floated down the large, open bay, each clinging to the canoe with one hand and our paddles with the other.

The Madawaska makes for a great teaching river because most rapids dump into large pools, so usually when you tip you don’t bump over too many rocks before coming to a safe place.

Our group of about 40 Wilderness Adventurers club members camped on the river at Jessup’s Farm, in the Eastern Ontario town of Palmer Rapids, about 40 minutes northeast of Bancroft. From the campground, we could easily paddle out to play in the rapids, ride down the river or portage upriver for the upper set. About 10 were highly skilled whitewater paddlers who volunteered their time to teach newer members.

Since this was my fourth year, I was in the intermediate group, teamed with relative beginner Paul, who proved to be an excellent partner ‒ he let me boss him around and I got to steer. One of the others jokingly called me “Captain Kim” and I loved it. I finally got to be captain. In the morning, we warmed up on flat water. Then we practised ferrying back and forth across bigger and bigger rapids, aiming for control and precision, tipping only once because Paul had a leg cramp and needed to get out of the boat immediately. My corrective brace caught nothing but air.

Lesson No. 2: When you tip, have a plausible excuse that goes beyond general incompetence, e.g., blame it on the leg cramp.

In the afternoon, our group advanced to the lower, longer set of rapids. We played follow the leader, copying Alan and Mike’s technique from one eddy to another. We cleared the biggest hazard, a hole of churning water created by a rock, and two pillow rocks below it lurking just under the surface. (A pillow rock is a submerged rock that’s hard to see, but shallow enough to hit.) Then we failed to make the eddy, and bounced right over a massive wave train. My partner grabbed the gunwales (the sides of the canoe) – completely instinctive but a no-no in whitewater paddling – and we dumped into a nice, calm lake where our kindly instructors rescued us once again.

Lesson No. 3: Whatever you do, don’t grab the gunwales.

One more rapid: the channel on the far left of the upper rapid. Somehow, I still managed to hit the biggest waves, but this time, we kept our paddles in the water and hands off the gunwales, emerging victorious: wet, dripping and somehow still in our boat full of water. I wasn’t surprised when Paul wanted to join the beginner group where it was safer.

The next morning, I relinquished control to my new partner, John, who wanted to stern. First up: the section of the upper rapid that tipped everyone in our group the previous day. Easily making the first eddy, John set us up and we plowed through the rooster wave, me leaning nearly all the way out of the boat to plunk the paddle in the second eddy and turn the canoe. We made it, then turned and went down the rest of the way.

At the bottom, on shore, John raved, “What a rush! That was fantastic!” He gave me a high-five and let me stern for a run on the lower rapids.

Everything went well; we cleared the hole as intended but ended up going down backward over the same wave train that tipped us the day before.

Lesson No. 4: You can ride rapids backward, but it is not recommended, for obvious reasons.

After lunch, I joined a swimming session with another volunteer leader, Brent Oliver. Climbing out on a rock into the rapids, I froze, transfixed by the churning, boiling water. Was this really a good idea? I jumped in and the waves repeatedly smacked my face as I bounced through the rapids, holding my feet in front of me to fend off rocks. I managed to avoid Piano Rock, shaped like a piano, and the pillow rocks nearby, not shaped like pillows. Then I started back-paddling like mad into the eddy, out of breath and so excited I did it all over again.

After that, Brent let me go in the stern. “You trust me?” I joked. With a skilled paddler in front, everything worked out so much better. Everything I tried to do, we did. I could feel the push and pull of the river, the soft water and the rapid, riding the trough of the waves. It was all beginning to make sense. But then Brent put me in the stern with another novice paddler called Mike on the bottom rapids. We missed the first eddy and ended up in the one below. Then we did a long ferry across to the other side. Paddled out, avoided the hole and the pillow rocks, somehow spun around backward again for the final section, failing to make the eddy.

What can I say? I just like doing it backward. I’m a rebel that way.

Your turn, if you dare

How to live the cottage lake life when you don’t actually own a cottage
June 28, 2018 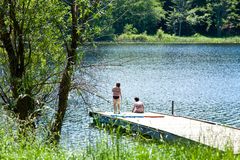 Sharks and champagne: Onboard the Seabourn Encore cruise ship, travellers explore Australia in luxury
May 25, 2018 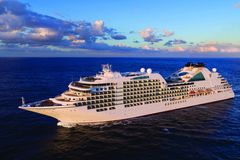 Glamping sites that let you experience nature in the lap of luxury
April 25, 2018 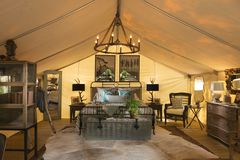