If you’ve ever wondered where Margaret Atwood would go to buy a rain poncho sporting a picture of an exploding volcano, here’s your answer: Seyoisfjorour.

This tiny fishing community in the dramatic East Fjords of Iceland is one of the stops aboard Adventure Canada’s Ocean Endeavour, a 137-metre polar expedition vessel on which Atwood is vacationing with family.

The literary legend tells me she’s been trekking with this adventure cruise company based in Mississauga regularly for nearly two decades, which leads to a chat about what makes circumnavigating Iceland – a tour new to Adventure Canada’s lineup this year – so special.

“[Iceland knows] they’ve got something,” Atwood says. “What they have is glaciers, volcanoes and Icelanders, and they make the most of that.”

Not smitten with just the rain cape, Atwood also scooped up some reindeer bone buttons as gifts, plus handcrafted seaweed jewelry by folk artist Kristin Thorunn Helgadottir. “She made this beautiful thing out of nothing, things that other people would just not notice.”

And as I’d learned earlier on the 10-day excursion, much about this country can only be noticed from the deck of a cruise ship.

The most common way to see Iceland is driving the Ring Road, a 1,332-kilometre route encircling the country – but it doesn’t go everywhere. Drivers would miss the East Fjords and West Fjords, as well as the spectacular Snaefellsnes peninsula just north of Reykjavík. There's also the matter of going shoulder to shoulder with ever-increasing crowds at popular tourism stops, and scrapping over limited accommodation along the way.

But this agile, 198-passenger ship takes the road less travelled, because we’re not on a road at all – our access points come through dockside mooring and a fleet of zodiacs that ferry passengers to secluded fjords and fishing towns, allowing us to sidestep the hordes and avoid the worry about overbooked rooms.

“We’re getting access to a lot of places that you wouldn’t be able to get to via the road systems,” says Matthew James Swan, Adventure Canada’s director of business development and an expedition leader. “We’re off exploring full days, enjoying the destination and then we come back to our floating hotel … there’s no time behind a wheel.”

Early on in the journey, a ship-wide announcement rouses me from a jet-lag-induced nap: “Good afternoon, everyone. We just wanted to let you know that humpbacks have been spotted off the port side of the ship.” I throw open my cabin curtains and am greeted by the cresting dorsal fins of seven humpback whales, no more than 15 metres from my bed.

Each day we land in a different port and get to choose from a variety of planned activities, such as an outdoor play at the herring museum, a zodiac tour of puffin breeding grounds with the onboard ornithologist, or an interpretive climb up an active volcano with a guest volcanist.

I put my name down for a four-hour hike that takes us up behind the colourful fishing village of Siglufjorour, where Swan guides us along the lush, 17-kilometre fjord.

“You can really bring a destination to life when you get a full understanding of your surroundings, and we feel [it] stimulating all of the senses – sound, sight, taste, smell,” Swan says.

Breathing deep, I’m hit with the lush, sickly sweet smell of thousands of blooming purple lupines that carpet the steep, glacier-formed mountains curling down to the sea.

I traipse behind a small flock of bleating, long-coated sheep up a well-marked trail, leading from one glistening waterfall to the next, my path only temporarily blocked by a mating pair of black-tailed godwits twittering loudly at me, confused by this rare human intrusion.

Even Svanur Gisli Thorkelsson, an onboard guide who’s been leading groups around Iceland for 32 years, is impressed with this rare stop, 41 kilometres off Iceland’s northern coast: “I might never have gotten there unless I was here with the boat. Definitely a different perspective.”

Grímsey is home to only 30 wind-worn Icelanders year-round, but greets tens of thousands of puffins and other nesting Arctic birds each summer. Kitted out in waterproof gear (there’s always a fine mist in the air), I tuck down in a grassy fold near the edge of a 110-metre cliff and watch dozens of Atlantic puffins return to their burrows, beaks filled with sand eels for their chicks. I’m so close I can hear their strong, stubby wings beating against the North Atlantic wind.

But it’s not all birds and cliffs; the island’s tiny café also stocks an impressive supply of traditional Icelandic-wool sweaters and hats, handknitted by local women.

So while Atwood has her rain poncho from the trip, in the end I’ve gained a new woolly pompon toque – and a deeper appreciation for life and landscapes on Iceland’s dramatic coast.

Booking in advance is recommended as only one Iceland circumnavigation is sailing in 2019 (July 5-14). Prices start at US$4,495, which includes a $250 donation to the Discovery Fund, an Adventure Canada initiative that supports sustainable initiatives in the regions where the ship sails. Since this expedition goes to remote coastal areas, you will also need travel insurance that covers medical evacuation of at least $75,000. adventurecanada.com

HOW TO GET THERE

Cruise prices don’t include airfare, so you’ll need to get to Reykjavík on your own in time for disembarkation. Icelandair flies direct from Edmonton, Vancouver, Toronto, Montreal and Halifax, and will start your cultural immersion before even taking off with language lessons embossed on headrest covers and tasty Icelandic snacks (hello, Skyr creme brûlée).

To follow Margaret Atwood’s sartorial lead, get your own volcano rain cape – sporting an image of molten lava streaming down the sides of Eyjafjallajokull during its 2010 eruption — by checking out puzzledbyiceland.com.

The writer was a guest of Adventure Canada. It did not review or approve the story before publication.

The other reason to go to Iceland: It’s wonderfully weird 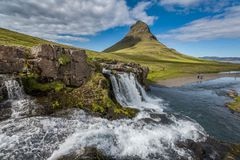