In Calgary’s Beltline, stretching from the Elbow River to 4th Street SW and the train tracks near 10th Avenue down to 17th Avenue South, Victoria Park encapsulates the Stampede Grounds but there’s nothing cowboy about most of its other offerings. Unveiled earlier this year, the city has a 20-year plan to revitalize the area into an entertainment hub. Naturally, enterprising creatives have already begun bringing it back to life.

What had largely been a postindustrial ghost town since the 1960s is blooming with bars, restaurants and boutiques, and more are bound to follow. In time, more shiny condo developments will inevitably pop up too, but for now aging brutalist buildings and empty lots juxtapose the cool new things that all live well within a two-kilometre radius.

A neighbourhood trailblazer, Hotel Arts, near the corner of 12th Avenue and 1st Street, turned an old Holiday Inn into a boutique, 185-room property back in 2005. As the name declares, art is their unifying theme. Works by Canadian artists fill the foyers, hallways and rooms, including a blown-glass light installation by Calgary’s Barry Fairbairn illuminating the entrance and a tribute to Martin Luther King Jr. by Edmonton-born Tim Okamura just outside their award-winning Yellow Door Bistro.

A seasonal outdoor pool and patio on the lobby level even tempts locals to pay for a plunge, and comes with dining time limits to account for its popularity – of course, these rules don’t apply to guests. Should one aim to venture beyond Victoria Park (perhaps the RiverWalk on a sunny day), there’s a fresh, new fleet of cruiser bikes to borrow and a picnic lunch for the road can be arranged. From $99, 119 12 Ave. SW, hotelarts.ca

Opening an ice cream shop just south of the train tracks hidden in a strange kind of urban cul-de-sac doesn’t sound like a good idea, but it was, namely because Billy Friley’s product is that good. They have staple flavours, including Earl Grey using Two Hills tea and chocolate mint inspired by the Girl Guide cookie, as well as seasonal ones. 431 10 Ave. SE, villageicecream.com

Tingeing its piece of The Red Mile (17th Avenue) pastel pink and pale green, the Calcutta Cricket Club wouldn’t feel out of place in a Wes Anderson film. The first interiors project by local artist Maya Gohill, she’s joked that the restaurant’s design is an Indian-gentleman’s-club-meets-Golden Girls. In the kitchen, chef Rene Bhullar’s menu pays homage to Calcutta’s cosmopolitan cuisine, including a take on Hakka-style chilli chicken. A bartender described their kati rolls, a Bengali-born dish, as “a demonic marriage of a croissant and naan,” and he’s not wrong, if delicious and devilish can be considered synonyms. Many items pack proper heat, which can be promptly cooled down by the Rye, Chai, Thank You Bhai cocktail served with a chai ice cube that slowly alters the concoction as it melts – make it the meal’s finale. 340 17 Ave. SW, calcuttacricketclub.com

The first of Cody Willis’s three Victoria Park restaurants (including Calcutta Cricket Club and Two Penny Chinese), Native Tongues does as-authentic-as-possible Mexican. Open late morning through late night, the 60-odd seat room looks lived-in beyond its two years thanks to a feature wall that mimics layers of plaster and plenty of rustic wood. The corn tortillas and salsas are all housemade, and the charcoal and wood-burning grill imbues meats and veggies with that sought-after smoke. Their brunch tostada and paloma is a welcome switch from the standard eggs benny and mimosa. 235 12th Ave. SW, nativetongues.ca

The corner of 1st Street SW and 13th Avenue SE is a boozy one. Here, Jeff Jamieson and Jesse Willis set up both a boutique liquor store, Vine Arts, and a proper cocktail bar, Proof. Naturally, sidling up the latter’s bar, which opened in 2015, and letting a pro do the mixing is preferable. Divided by dominant spirit, their cocktail menu changes occasionally, but Fire in the Pharmacy, a kind of mezcal penicillin, has deservedly stuck around since the beginning. Tasty bar snacks, including $5 pork steambuns, go beyond simply soaking up the alcohol. 1302 1st St. SW, proofyyc.com

Baby brother of much-loved, veggie-forward restaurant Ten Foot Henry, Little Henry is a small café decorated with books and succulents serving up great coffee that ticks all the feel-good boxes (organic, fair trade, locally roasted). Their tea, kombucha and juice are so locally blended, brewed and cold pressed. After an evening of bar hopping, these beverages are a welcome sight, as are the avocado toast and coconut cake. 1209 1st St. SW, tenfoothenry.com

For seven years, the independent boutique Understudy was strictly mens’ wear, carrying labels such as Norse Projects, Engineered Garments and Arc’teryx’s Veilance line. But as of May, the shop expanded into a car garage out back in order to offer womens’ wear. Owner Liam Rodgers brought in his sister, Kate Rodgers, an alumnus of West Coast boutique chain Gravity, and she’s picked a mix of Canadian and international brands, including Vancouver’s Sonya Lee and Munich’s the Sept. 1312 1st St. SW, understudyshop.com

Now under the creative direction of interior designer Amanda Hamilton, the Loft is a shop-able living room, not unlike the Apartment by the Line in New York, that’s only open on Saturdays between 12 p.m. to 4 p.m. or by appointment. Some of the easier items to walk out with are key chains by Calgarian Chelsea Kindrachuk, ceramics by Brooklyn’s Brooke Winfrey and Hamilton’s own homewares, including Moroccan rugs she brought back from Marrakesh herself. 405 11th Ave. SE, loft.amandahamiltondesign.com

The writer travelled as a guest of Thank You Hospitality. It did not review or approve this article.

Coast to coast adventure: Get ready to travel Canada this summer with this cross-country guide
Subscriber content
June 21, 2018 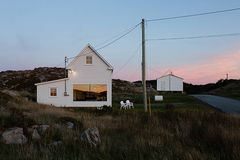