The pilot's voice crackled over the intercom: "Please don't be alarmed by the smoke you smell in the cabin." The plane was just beginning its descent into Whitehorse when I noticed the distinct odour. The good news was that the smoke was outside the plane, caused by several forest fires burning throughout northern B.C. and the Yukon from an unseasonably hot summer. The bad news was this is exactly where I had come to go mountain biking. Looking out the window, I saw only thick grey fog. I hadn't even arrived, yet I knew this trip was going to be an adventure.

The Yukon has been ranked as a top new destination for mountain biking. Recent reports in mountain-bike magazines hail Canada's North as the next Moab. About 800 kilometres of steep downhill chutes, fast-flowing single-track and epic cross-country trails whip and wend through the Whitehorse wilderness, with seldom another rider in sight. Keen to check it out, I booked a five-day trip in mid-August with Boréale Mountain Biking, a Whitehorse-based outfitter specializing in guided rides from yurt lodgings set in the pine forest overlooking town.

The next morning, I met Sylvain Turcotte, Boréale's owner and lead guide, a fit and friendly 31-year-old Quebec transplant who, along with his partner, Marsha Cameron, has been operating Boréale since 2008. After unpacking and assembling my bike, which I brought on the Air North flight from Vancouver, I was soon pedalling with the group through a pine forest bathed in yellow light. The sun was a golden orb in a sepia sky. The forest fires were distant, but the smoke was not. I rode trails called Hula Girl, Magnusson and Boogaloo: broad sweeping loops, interconnected with short ups and long fast downs with switchbacks and berms. The ride finished about three hours later at Schwatka Lake, a tranquil body of water that was formerly a fierce section of the Yukon River. The rapids here were said to resemble the manes of charging white horses, and gave the city its name during the Klondike gold rush of 1898. A dam built in 1958 flattened the white water and created the Schwatka Lake reservoir. Many of the prospector's wagon trails are now mountain-bike tracks.

That night at the camp, the group discussed whether to continue riding. A story in the local newspaper warned against physical activity with the smoke surrounding town. By morning, my worries were replaced with elation, as I walked out of my yurt into a brisk breeze and cloudless sky - winds had come in overnight and blown the smoke away.

Turcotte was beaming, "I think we will go to Carcross today."

A few hours later, I was high on Montana Mountain, 75 kilometres south of Whitehorse. I was bouncing in the cab of a four-wheel-drive truck up a steep road of football-sized rocks, passing Arctic lupine flowers and dwarf willows. I stepped outside into a treeless, glacier-scrubbed landscape. Bikes were unloaded, backpacks sorted, and the group was soon pushing farther up a road too rough to drive. It snaked up and down for miles; I pedalled past fields of fireweed and splashed through gin-clear streams. Far below, Tagish Lake glistened in the midday sun. Above, a lone caribou stood on a snowy slope, a dark motionless figure, cooling itself from the boreal summer. Startled, it began charging downhill, hoofing up snow, until reaching the rocky slope below and bounding out of site.

The Mountain Hero Trail, one of the Yukon's signature rides, is named for a former silver mine and begins on a barren knoll just shy of the 2,205-metre summit.

Seats were lowered and the group descended over loose rocks and spongy lichen. The trail was difficult to discern, marked only by knee-high rock cairns. I rolled past huge wooden trestles, remnants of the tramline built in 1905 to haul silver ore down the mountain to Tagish Lake. Silver was discovered in Carcross after the Klondike gold rush, but the mine went bankrupt before delivering a single load. Picking up speed, I dropped through the mountain's climactic zones; from the sparse summit, I was soon pedalling past waist-high shrubs and finally into a forest of alpine fir and black spruce. The ride was fast and furious and the smell of burning disc brakes filled the air on trails built for packhorses more than a century ago. "Nice of them to build this for us," Turcotte yelled careening through one of the corners.

But some trails go back even farther.

Montana Mountain is on land belonging to the Carcross/Tagish First Nation, which had trade routes here before European settlers arrived. In 2006, an innovative mountain bike trail-building program called Singletrack to Success began employing native youths to fix up the paths. Since then, old trails are restored and new ones are built each summer.

"Part of the revitalization of our culture is bringing our young people back to the land," explained Justin Ferbey, who heads up the project for the band. "As we build these trails, a lot of them are historical, from time immemorial for us. The trails are more than just biking for us; they bring cultural relevance to some of our historical practices today."

Throughout the trip, Turcotte tailored our rides to suit my style of riding: fast-flowing downhill that's technical enough to keep me on my toes. My Santa Cruz Nomad, a high-performance full-suspension bike, was a great fit for the trails. Most days, we rode in the morning, rested in the afternoon, and then went out again in the evening. With long days, dry weather and spring-like temperatures, the Yukon has an ideal climate for mountain biking. But like most new "it" destinations, I expected the riding to be a bit rough around the edges. Instead, I was blown away by the quality and scope of the trails.

One of those rides was Grey Mountain, overlooking town to the south. After a shuttle up, the group rode down, dropping in and out of the tight lodgepole pine and black spruce forest, crossing narrow bridges and barrelling between trees so tight my handlebars hardly fit. The trail traversed high above Chadburn Lake before joining the Yukon River Trail. I followed the river into the setting sun, squinting to see. I glanced at my watch; it was 10 p.m. The path was narrow, and loose and ran along a steep embankment with nowhere to put a foot down. I stayed focused, trying not to fall. The Yukon River meandered below, its rapids now tamed; I kept cranking on the pedals, the trails still wild.

Air North has worked out a deal with Boréale Mountain Biking. Return flights with your bike from Vancouver, Calgary or Edmonton cost $475. 1-800-661-0407; www.flyairnorth.com.

Boréale Mountain Biking Season runs from May to September. A three-day weekend package including accommodation in spacious hardwood-floored yurts, meals and guided rides costs $700 per person, including tax, airport transfers and on-ground transportation, as well as Gold Standard certified carbon offsets through Planetair.ca. Most riders bring their own bikes, but Boréale does have some available for rental. New for 2010 is a six-day (July 3 to 9) riding and yoga retreat with pro mountain biker and yoga instructor Ryan Leech (limited to eight guests). 1-867-332-1722; borealebiking.ca.

Up North Adventures offers guided canoe and kayak trips on the Yukon River and rents boats for self-guided trips. 1-867-667-7035; upnorthadventures.com. 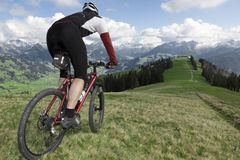