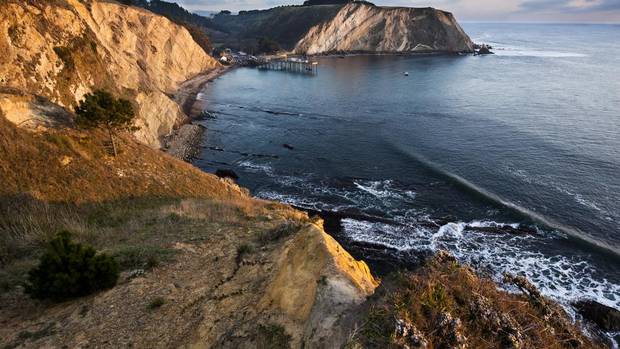 We are standing on a grassy plateau, on pale cliffs high above the Pacific, looking down at a semi-circular cove that boasts a pier stretching out into the sea. Given that this is California, they call our perch merely bluffs. The landscape is heroic here in Mendocino County, three-plus hours of curvy coastal driving north of San Francisco. Inland are mountains and steep valleys with wide rivers. Up from them are redwood groves and increasingly renowned vineyards. But a first trip need not venture so far: It should focus on – and revel in – the coast.

And that’s what we’re doing. Here on the clifftop are red networks of seascape strawberry plants and tiny blue-and-yellow Douglas irises – and cows. Locals long ago scotched plans to put a nuclear facility on these headlands, precariously close to the San Andreas fault. I toss a pebble off the edge, and it takes four Mississippis to land – some bluff. A few surfers ply the moderate waves below, and a fishing skiff arrives to unload the day’s catch at the dock.

This part of Mendocino County is having a moment – Obama has just declared these lands, the Stornetta Public Lands, a National Monument and, in part for that reason, the New York Times has advised readers to visit, rating these bluffs and the nearby town of Point Arena as among the top destinations for 2014. For now, the seaside county retains a rough post-hippie charm – both the coast and what’s on shore are more ragged, less manicured than the wine counties of Sonoma and Napa just south of here. 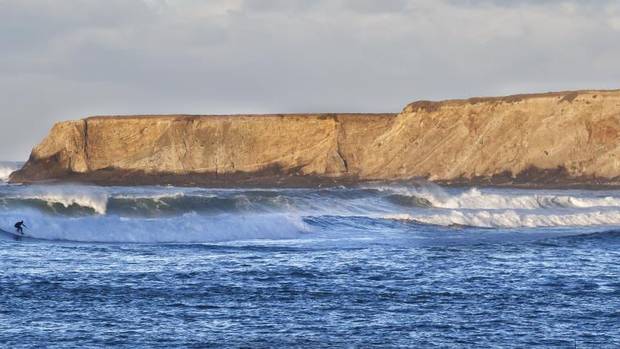 We run into only a few other hikers as we walk along the cliffs, past a couple of small waterfalls carrying spring runoff into the sea. The coastal stone is soft enough – sedimentary, with slate and sandstone in the mix – that here the Pacific plays sculptor, carving tall sea stacks and arches. In the shelter lent by a small island, harbour seals bob in the surf, their blubbery heads all facing the sun.

Out on the open sea, humpbacks blow spume as they pass by on their way to the Arctic, but, alas, none breaches the surface. Beyond, on a headland, sits the Point Arena Lighthouse, a classic model that, at 35 metres, is the tallest on the American West Coast.

The fact that Point Arena hit No. 3 on The Times’ annual travel list makes some of the 449 locals belly laugh. Twenty per cent of the county’s residents live below the poverty line, and the town has two types of establishments: old-timer hangouts and the glossy joints that newcomers and weekenders prefer. (There are two grocery stores for instance, one with organic bulk food and artisanal olive bread, the other serving mainly packaged national brands under bright lights.) One afternoon, a dad leaves his young children, including one in a stroller, unsupervised on the sidewalk while he pops in for a pint at the rough-and-tumble Sign of the Whale. Nearby, a renovated vaudeville theatre (built in 1929) screens operas from the Lincoln Center and highbrow dramas from Britain’s National Theatre. 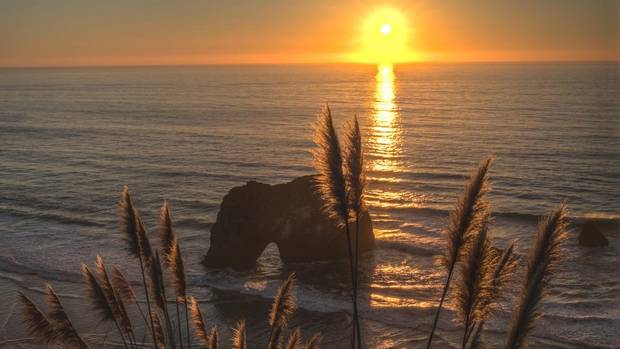 Robert and Jill Hunter, a husband-and-wife team, run Uneda Eat. The tiny space was an old butcher shop, Uneda Meats, and they blacked out two letters. Robert is a self-taught chef, and some well-thumbed, spattered-upon cookbooks fill a shelf above our table. On the wall facing us is a vertical installation of succulent plants and a small screen playing muted nature films.

The food is polyglot – much inspired by the couple’s recent menu-supplementing sabbatical in Southeast Asia – and the moist, salty meat falls off a pork rib that has been soaked in a soy-accented marinade for 72 hours, and cooked over low heat for a day. It’s done sous-vide, of course, the mode of the moment.

Toward the end of the meal, I look up and see zebras nickering silently on the television – a good-enough prelude to the next day’s visit to a breeding farm for rare and endangered African hoofed animals. Frank and Judy Mello own and run the B. Bryan Preserve. She is originally from Louisiana, but she doesn’t drawl – she has too many jokes, too much information and conservationist passion to toss out to speak slowly.

Roaming about the moderate acreage are three species each of rare zebra and antelope and five of the last 670 remaining Rothschild’s giraffes in the world. “They’re teenaged males, so their barn reeks. The five bumps on their heads are called ossicones, ” Mello informs me. She delineates the hierarchy in an all-female kudu antelope herd and, as if on cue, they all turn, show us their ample rumps and urinate. “That’s rude, girls!” Mello shakes her head. 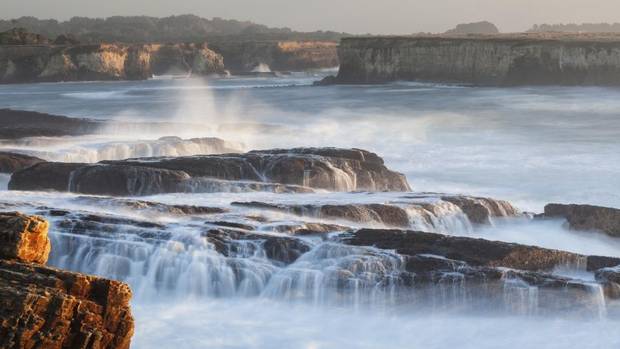 Further up the coast sits the posher, already discovered Mendocino, an old logging and lumber-processing town, prettied up by the artists who flocked here in the midcentury – a Bohemian migration that inspired the McGarrigle sisters’ musical tribute, Talk to Me of Mendocino. The town is curiously reminiscent of a seaside hamlet in New England or the Canadian Maritimes – and lots of settlers came here from both areas. (It masqueraded as a fictional Maine town, Cabot Cove, in Angela Lansbury’s 1980s show, Murder, She Wrote.)

Fancy carpentry and one-off detail distinguish many buildings – and it’s one of only four towns in the United States named as historical landmarks. A Masonic lodge has, for reasons best known to the fraternity, a redwood statue on its cupola of a winged Reaper standing behind a fair maiden carrying an orb and wheat sheaf.

In a cove south of Mendocino, I go sea kayaking with Craig Comen, an eco-minded guide, former pro surfer and sales rep for Patagonia. Comen mixes paddling pointers with gossip about the curious habits of the peleagic cormorants nearby. He points out a dark layer at the top of many cliffs – native middens, the detritus of their former seaside encampments – and draws my attention to the modernist-inspired mansion of a pet-food magnate who flies his plane in some weekends. 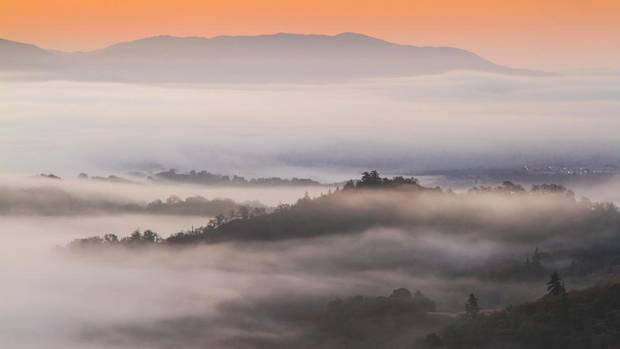 Standing ready to receive the jet set is a gussied-up group of cottages around the Heritage House, an old inn on a particularly spectacular seaside site. The 1978 film Same Time, Next Year, starring Alan Alda and Ellen Burstyn, was shot here. It tells the story of an adulterous pair who meet annually for dirty (and increasingly soulful) weekends with each other amid bright chintzes, busy wallpapers and dark-wood antiques.

But when Heritage House reopened last fall after being closed for four years, such decor was gone. Our suite has been thoroughly Zenned. Now, its neutral sofas, pale sisal rugs and slate-tiled bathroom make what is outside the window pop with colour. Clumps of bush lupines, flowering purple in front of a red fence. The grey-green ocean with its violent white surf. Caramel cliffs lit up by the setting sun.

On our last evening, after watching the old movie streaming on a hotel channel devoted to it, we go out and breathe in a nightcap of fresh salty air and stand silent under a sky bright with stars. The familiar huntsman Orion is barely discernible in this throng. Same time next year? If only.

Stornetta Public Lands – the newly declared National Monument – can be accessed from the parking lot next to Point Arena’s City Hall (51 School St.), and the hike is a gentle one, with panoramic views of the coastline from tall bluffs.

Amateur Darwins can theorize about the origins of the many species of plant and animal trapped in the pools at low tide on Moat Creek Beach, just south of Point Arena.

Visitors cram into an old Land Rover on the B. Bryan Preserve to see and learn about the rare zebra, antelope and giraffe that live and breed here. $30 for adults, $15 for children. 130 Riverside Dr., Point Arena, bbryanpreserve.com

The Point Arena Lighthouse has 144 steps winding to its top, where if it’s whale season you’ll often see breaching humpbacks. The attached museum has the massive Fresnel lens that once turned up top, assorted Pomo Indian artifacts and tales of shipwrecks and Japanese submarine sightings past. Admission $5; 45500 Lighthouse Road, pointarenalighthouse.com

A side-trip up the Anderson Valley via Route 128 winds through cathedral-tall redwoods to some up-and-coming wineries. Farmers tend to favour organic and biodynamic methods for their pinots and dry gewurztraminers. Top choice: Phillips Hill Winery, with tasting rooms in an old apple-drying barn – with Boontling, a local dialect, on the labels. 5101 Route 128, Philo, phillipshill.com

Craig Comen’s Kayak Mendocino takes paddlers from the beach at Van Damme State Park into caves and through treacherous passages. $60 for adults, $40 for kids; kayakmendocino.com

Coast Guard House Historic Inn, run by ebullient Philadelphia transplant Mia Gallagher, has had a chic update, but it still knows and nods to its nautical past – choose the Flag Room. Rooms from $160. 695 Point Arena Wharf, Point Arena, coastguardhouse.com

The onion-domed wood buildings that house St. Orres restaurant – and a hotel – pay tribute to the Russians who came to this coast in the 19th century. Dishes with mushrooms foraged from nearby woods are a particular forte. 36601 Highway One, Gualala, 707-884-3335, storres.com

Wild Fish is a rarity among all the cheery coastside chowder houses, a truly ambitious (and accomplished) fish-focused restaurant. $60 per person, without alcohol. 7750 N Highway One, Little River, 707-937-3055, wild-fish.com

The writer travelled courtesy of Visit Mendocino. It did not review or approve this article.