It could be worse. I looked wearily across the crowd to my new Dutch friend, Lisanne. It was 9:30 in the morning, I was sweating from every pore on my body, roasting in the Southeast Asian sun, my skin slick with sweat and pushed up against strangers on all sides of me. We were in the thick of it – surrounded by locals and a handful of equally overwhelmed backpackers, all of us scrapping for the cheapest ticket aboard the slow ferry. We were leaving the small paradise island of Siquijor in the Philippines. After four blissful days exploring waterfalls and deserted beaches, it was time to move on. I was headed to the neighbouring island Bohol; Lisanne would continue to Cebu City. And so there we stood for hours, all to save 500 pesos on our tickets – the equivalent of about $13. "It could be worse, at least its not raining!" Lisanne said, with a sympathetic smile on her face. I forced a limp smile in return, "Yep, it could be worse."

I have learned from years of backpacking that when things get bad – and they often do – and you wonder what the hell you were thinking taking the longer, harder, infinitely less comfortable route, just to save $10, that it could always be worse. This way of life has made me more resilient than I ever imagined I could be. Backpackers happily lug 15 kilos of our lives on our backs, often through sweltering hot climates, on the cheapest mode of transport available. These challenges are the flip side of the freedom we associate with travel. They are the price we pay to get lost in those picture-perfect slices of paradise for months on end. It's not what makes you want to quit your job and buy a plane ticket, but it is what makes it possible.

Our boat journey from Siquijor to Bohol was one of these quintessential challenges. There were two ways for us to get off the island. We were told the cheapest one was a slow boat that left three times a week at 7 p.m. The ticket office opened at 9 a.m. Tickets sold out quickly, so we needed to get to the office early. The other option was a fast ferry that left midday and cost almost twice the price. So, we set our alarms for 5:45 a.m. to be at Larena Port by 6:30 – 2-1/2 hours before the office opened.

Bleary-eyed and delirious, we hopped on the back of Lisanne's scooter and headed out into the cool morning air. When we arrived at the port there were only 15 people in line. We had come much earlier than necessary, but it looked like we would get the coveted slow-ferry tickets.

At 8 Lisanne got back on her bike and headed into town to grab us ice coffees and sweet bread for breakfast. While she was gone, I noticed that the line had slowly started to grow. When she returned 15 minutes later we were handed a little scrap of paper and told to write our names and destinations and then were assigned a number in line. No. 47 and No. 48 … were we really that far back? I guess at least we'll get a ticket, I thought.

By 8:45, we were beginning to feel more confident. "We'll be back at JJ's with an ice coffee in hand by 10:30," we said, pleased with the success of our early start. Right before the office opened at 9, someone handed the pile of little paper scraps back out. And by handed out, I mean dropped it on the ground, in the centre of the now densely-packed crowd. Before I knew what had happened, every hopeful ferry-goer was frantically trying to seize their ticket. The scene was a mosh pit of people, yelling in all tongues, shoving each other, trying to jump the rail into the front of the line. In a flash, Lisanne was right in the centre of the chaos. Without hesitation, she was on all fours desperately searching for No. 47 and 48.

Slowly, the pile began to dwindle, and the victorious began to push their way into the line. Somehow the 15 people ahead of us had doubled in size in the mad dash. Well, at least we were still close to the front … When the ticket office opened at 9, it was eerily still.

Then, suddenly, everyone charged forward to the front yet again, filling every available open area. I grabbed Lisanne's paper, and shouted that I would get the tickets. Suddenly, I was sucked forward into the crowd, pressed between strangers, 20 people or more from the front of the line. Behind me was a 13-year-old Filipino girl who had been sent to buy tickets for her family. I grabbed her hand, and together we tried to move up. How did I get here? Why was I doing this, I wondered? And more important, would I ever get the goddamn tickets?

I stood there, watching as someone would leave with their coveted tickets clenched protectively in their fist, and three more people would hurl themselves over the railing trying to cut in. Lisanne used her height to block people from cutting in, posting up near the railing that separated the front of the line from the rest of the crowd. Much to the delight of the locals, she began to lose her cool and started pulling people off the railing who pushed past her. She grabbed the back of a man's shirt as he was about to get a leg over the railing and pulled him down. "Get in line, buddy; we've been here since 6 a.m." Cheers and laughs erupted from the surrounding crowd. No one tried to pass the six-foot blonde after that.

Another hour-and-a-half crawled by while I stood, gripping the young girl's hand, edging us forward an inch or so every few minutes. A thick layer of sweat now coated my body. The occasional breeze was the only relief from the climbing heat and beating sun. In more than 90 minutes I had managed to move forward all of two feet. I couldn't help but see the comedy in my current state "It could be worse," I said, looking over the sea of people to Lisanne. "What if we couldn't get a ticket after all this?"

At 10:30, we heard the announcement we had feared most: "Tourist class is sold out." Four hours of standing in 30-degree heat and we had nothing to show for it.

I looked to Lisanne, her weary face mirroring my own disappointment and exhaustion. The appeal of tourist class was that it had beds.

Now we would have to stand in line (for God knows how much longer) just to get seats on the eight-plus-hour overnight boat ride. The decision was clear. "Let's go get a ticket for the fast ferry," I said decidedly, "this isn't worth it."

Relief washed over me as Lisanne grabbed my hand and pulled me the last couple feet through the crowd. The space in line I left behind was filled in a flash, and my young companion now held the hand of another nearby stranger. She gave me one last smile and wave as we turned to walk away. Backpackers farther back in line looked at us expectantly as we gave them the shrug of defeat. The looks of hope on their faces dropped when they realized if we didn't come away with tickets, there's no way they would, either.

Our stride quickened as we crossed the street towards the bike. There was a noticeable spring of relief in our step; we were out of the worst of it now. As we drove away from the port, I tilted my head back and let the welcome wind wash over me. The crowd disappeared behind us as we set out for the port in Siquijor Town, and with it the chaos of this morning began to fade away.

When we arrived at the port we walked straight up to the counter, happily shelled out the extra 500 pesos and easily secured seats on the fast ferry. "Well," I said, as we walked leisurely back to the bike, tickets in hand, "it could have been worse!" We would make it to our respective destinations by sunset, but more important, a swim in the ocean and a much-needed ice coffee were calling our names.

What a 14-hour plane ride taught me about life
March 24, 2017
In Nepal, a chance encounter showed me the value of trusting strangers
March 2, 2017
Biking along Birmingham's old canals, I took an unexpected detour
February 27, 2017 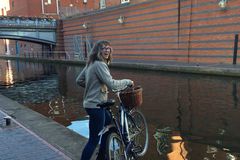