As if a glass of champagne upon arrival isn't enough – travellers can be so demanding – the Revere Hotel takes it a step further by slipping a signature fragrance of white tea and thyme into its gold-tiled lobby. Because, yes, they want to make your first time – and every time thereafter – special.

Formerly The Radisson Boston, the building underwent a $37-million (U.S.) renovation to emerge last year as the independently owned Revere Hotel. The remake kept things local, starting with its name, a salute to the famed patriot who rode through the streets in 1775. The design builds on that theme, referencing its theatrical locale and city history with a thread of subtle whimsy throughout.

Is two blocks from the city's expansive, historic park, Boston Common, central enough for you? Beantown is known as a walkable city and nearby destinations include the Wang Theatre, an art deco palace where everyone from Morrissey to Jerry Seinfeld have performed; Newbury Street, a mix of high-end retail and local designers; and the South End neighbourhood with its Victorian rowhouses, art galleries and coffee shops.

Seven floors up, the Rooftop@Revere gives you that hit of Miami cool with cabanas, oversized monkey sculptures and pretty young servers in swimwear. Drink a blueberry vojito while pretending to read the curated Kindle that the hotel loans out and soak it all up. Or take a dip in the pool, as Amy Adams did for a recent Interview magazine photo shoot.

The hotel seems to possess a unique, but inclusive vibe. You'll see young bucks in V-necks on the rooftop, families at the breakfast buffet and business travellers checking in to the lobby (witness the number of bags on the doorknobs for the free overnight shoeshine).

Sure, you could stay in for breakfast at Rustic Kitchen, where scrambled eggs benefit from a dose of sour cream, and potatoes step it up with caramelized onion. But you're in the middle of some serious food activity in Boston. Head to the hot dining neighbourhood of Fort Point and get on the wait list for the bar at Blue Dragon. The new venture from Chef Ming Tsai offers an Asian spin on the gastropub, winning over the lineups with the likes of crispy pork tail with mango sticky rice and salt and pepper shrimp.

But eat at the hotel if the Revere is hosting one of its monthly Reel Chefs events. That's when top local chefs customize a menu to their favourite films being shown in the hotel's theatre; the next one, on June 18, features The Big Lebowski and a dude-tastically designed menu in honour of the cult flick.

Along with that glass of bubbly, check-in should include a more detailed overview of the hotel. Otherwise, I just might have missed the Ruby Room, a hidden bar behind a curving black corridor, or maybe not have discovered that the concierge would hand out jogging maps until 11 p.m. Then again, with a little less on my Boston do-list, there'd be time to just sink back into the big, comfy beds. After all, the do-not-disturb sign does read "Talent at Rest."

The writer was a guest of the Massachusetts Office of Travel & Tourism. 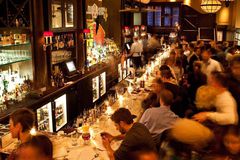 Boston brewmasters’ faves: Where you should belly up to the bar
December 17, 2012 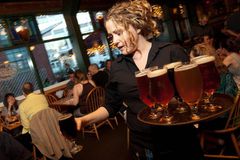 Boston's hip 'hood: gilded theatres and must-try eats
June 22, 2011
Follow us on Twitter @globeandmail Opens in a new window
Report an error Editorial code of conduct
Due to technical reasons, we have temporarily removed commenting from our articles. We hope to have this fixed soon. Thank you for your patience. If you are looking to give feedback on our new site, please send it along to feedback@globeandmail.com. If you want to write a letter to the editor, please forward to letters@globeandmail.com.
Comments