Most people go where most people have already gone. But the critically acclaimed food writer who divides her year between Toronto and Paris has a powerful longing to see the world her own way.

The titles of her single-minded culinary trilogy describe this elusive curiosity exactly: Bones, Fat and now Odd Bits, which is subtitled How to Cook the Rest of the Animal and extends the boundaries of gastronomic delight to tripe and trotters, cheeks and chitterlings, boudin and brains.

Her Paris, likewise, is a rest-of-the-animal kind of experience. From her apartment in the little-frequented 14th arrondissement, just inside Paris's encircling ring road (the périphérique), she explores the odd bits of the City of Light that have managed to stay clear of the spotlight.

"It's still very French, very calm and neighbourhoody," she says in the appreciative tones of a devotee who has been critically assessing Paris for more than three decades. "The bakers and the butchers are still here."

Where there's food, there's daily life and that's what McLagan savours most on her Paris sojourns. Her favourite market nourishes a passion for the city where an encyclopedic obsession with food is both normal and natural. The market's vendors have become guides and advisers as well as suppliers in her quest to exploit the intense French fascination with the unending wonders of the edible world.

Her Paris isn't just food, but the things she enjoys as she moves about the city often incorporate the eye for detail and gift for presentation evoked by the greengrocer's symmetric display of pink-and-white radishes or the butcher's methodical separation of a gigot d'agneau (a leg of lamb) from the entire carcass.

So when she shares her Parisian pleasures with a Canadian visitor, it's not so much the city's grand statements that catch her attention as the fine details: the man on the corner selling hand-picked bunches of lily-of-the-valley tied together with twine, the espaliered apple trees at the southwest corner of the Luxembourg Gardens, a finely crafted booklet about pommes frites in a small-press publisher's window, the Picasso-era artists' ateliers of the Villa d'Alésia overlooking the rolling terrain of Parc Monsouris.

"It's one of those nice little streets of individual houses that goes nowhere," she says with her connoisseur's taste for the easily missed. "You don't see a lot of that in Paris."

In a city that's endlessly capable of delighting the discerning eye, McLagan can map out a non-stop sensory experience of bridges and palaces and artisan Champagne-shop signs and the man who lugged the parrot on board the 28 bus that, to many people, would just be a zoned-out crosstown commute.

"I'm a bus freak," she says with the same enthusiasm and focus she brings to market-going – and then goes on to tout the new tramway that crosses her odd-bits end of Paris between the Seine to the west and Chinatown in the east.

Here, then, is her Paris:

This tiny and typical Parisian market on the town-hall square has everything for the discerning omnivore. Jennifer McLagan's favourite stops include the fishmonger who cooks whole crab, shucks scallops and stocks a salad-like seaweed called oreilles de cochon; the apple and pear vendor who also sells fresh juice; a mushroom seller specializing in chanterelles and pleurottes; and a greengrocer whose carefully displayed produce is consistently fine and delicate. Best on Fridays, 9 to 1:30 (also open Tuesdays). Place Jacques Demy

There's always a lineup spilling onto the street for this petite butcher shop where the display of perfectly cut chops and roasts is "a bit like a jewellery store." It's worth politely pushing through the crowds to see the best of French butchery performed under an array of pata negra hams. 45 rue Boulard

A street of suburban housing "on a very human scale," circa 1900, that once provided ateliers to artists who shunned the city centre's distractions. It is still a quiet retreat for thoughtful strollers who delight in unusually homey Parisian domestic architecture. Off rue d'Alésia

A small publisher, open to the public, who produces elegant and witty booklets on individual foods such as pommes frites, soy sauce and marrons glacés; cookbooks that feature recipes by colour; and highly specific guides to traditional ingredients such as sel de Guérande. 25 rue de la Sablière

The best croissants in Jennifer's corner of the 14th and a suitably crusty baguette. 25 rue des Plantes. Closed Monday.

Haralds Gaikis, Jennifer's husband, a sculptor and commercial model maker, regards Rodin as his idol. This bright museum in the Hotel Biron, recently renovated and partly reopened, is "manageable in scope, not too big, with a very pleasant garden." 79 rue de Varenne

"I have a fetish for notebooks and pencils and really beautiful paper," Jennifer says. This shop turns those ordinary objects into things of beauty. 26 rue Vavin. Tuesdays to Saturdays 10 to 7, Mondays 2 to 7.

The raw-milk butter is worth crossing the Atlantic for, the demi-sel will go well with your Parisian-market dinner of fresh radishes and cooked sea snails, and "crème fraîche from the crock is so thick that when you put the ladle in it sticks up straight." There are a number of Beillevaire outlets; Jennifer goes to: 8 rue Delambre. Open Tuesday to Saturday, Sunday morning.

The entire Luxembourg is worth a slow stroll, but after you've watched exquisitely dressed Parisian children at play and old men contesting a game of boules, head to the out-of-the-way southwest corner where ancient varieties of fruit trees are grown and bees are kept to make honey at the apiculture school (sold only at an open house at the end of September). la-sca.net/spip.php?rubrique2

When Jennifer won the James Beard award for her book Fat, she celebrated with a Champagne from this tiny shop, which also sells a small range of wines from independent producers in other French regions (Beaujolais is a favourite). 42 avenue de Breteuil

While Haralds, Jennifer's husband, enjoys visiting this untouristy department store to study power tools, drills and other hardware stuff in the basement, Jennifer soaks in the constant festival-like activity in the nearby square of the Hotel de Ville. 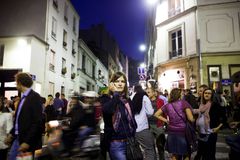 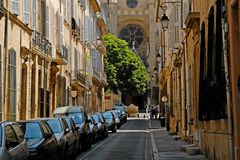