I am terribly confused.

When I envisioned landing on some far-flung islands in the Atlantic Ocean – five and half hours east of Toronto; two hours southwest of Lisbon – I had only the fuzziest of notions about what I’d be seeing. I expected sizable mountains and I knew the ocean waters wouldn’t need an Instagram filter to look nice and blue. But while exploring the Azores, I encounter so much more. I gaze upon fields of waving grass a shade of green the Irish haven’t invented. I stand on sheer cliffs of 1,000 metres or more, staring down at a black coastline of jumbled volcanic rock; it looks like Hawaii, with cobalt waves splashing white clouds of foam in the air. Nearby are white-washed homes with orangey-red tile roofs that make me think of Sicily or Sorrento. I find myself almost overwhelmed by this place, where folks seem to have borrowed from just about every corner of the world and come up with something else entirely. 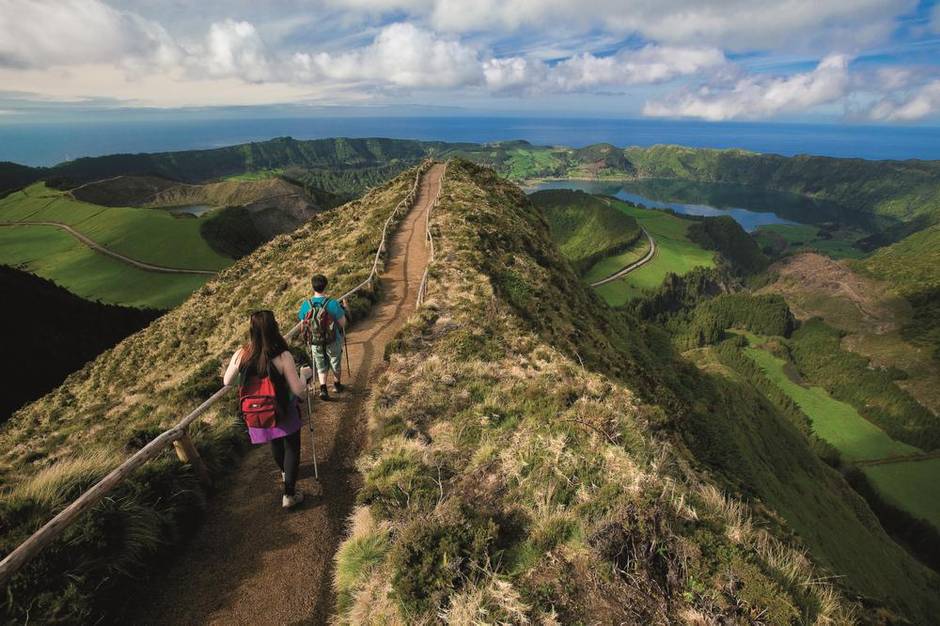 A walk through the western hills of Sao Miguel to the town of Sete Cidades. (AZORES TOURISM)

The best way to travel between these nine volcanic islands these days is by plane. But once you’re on land, nothing beats exploring them by foot. Hiking is a huge deal here, with mountains that plunge into deep blue water, hilltop lakes, tea plantations and a warm, gentle people to guide you along the way. Each of the islands, even tiny Corvo, boasts breathtaking trails – many the remnants of centuries-old footpaths used by islanders to transport goods on donkeys, or guide cattle out to pasture. Websites detail just about every plant and animal you’ll encounter, and large route signs show you the way with detailed maps, descriptions and degrees of difficulty.

My first full day begins on the long, skinny island of Sao Jorge with what looked – on paper – like a modest hike. My guide for the day is Elisabete Alves, a local resident and long-time hiking enthusiast. 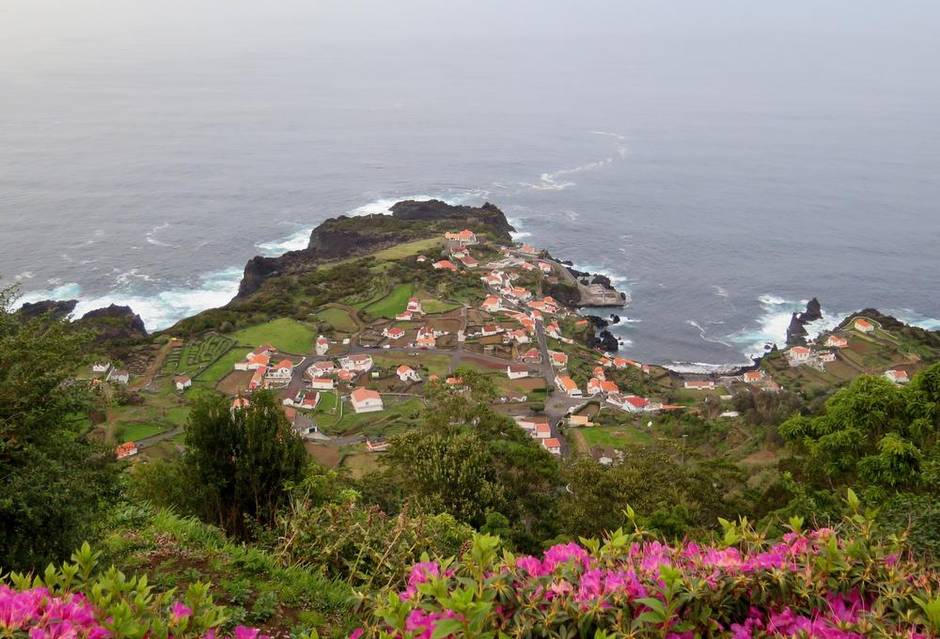 After stopping to admire the views from the pretty, low-key coastal town of Velas, we make our way over the top of the island, then drive down a ridiculously steep and winding road to Faja dos Cubres. Sao Jorge is famous for its fajas – small, usually rounded fingers of land created by volcanic flows and landslides.

Our hike is supposed to take us along the coast for a mere four kilometres to the village on Faja de Santo Cristo. Even for a guy of a certain age, it sounds like a nice afternoon stroll. But the minute we leave the parking lot I start to worry. What looked like flat terrain from high above is instead a series of knee-pounding, hip joint-smacking hills. It’s not the Rockies, but several times our dirt road rises 100 to 200 metres before plunging back down.

“This hike is rated medium,” Alves tells me as I rest my bones about halfway to Faja da Caldeira de Santo Cristo. “But it’s really medium-difficult because of the hills.” 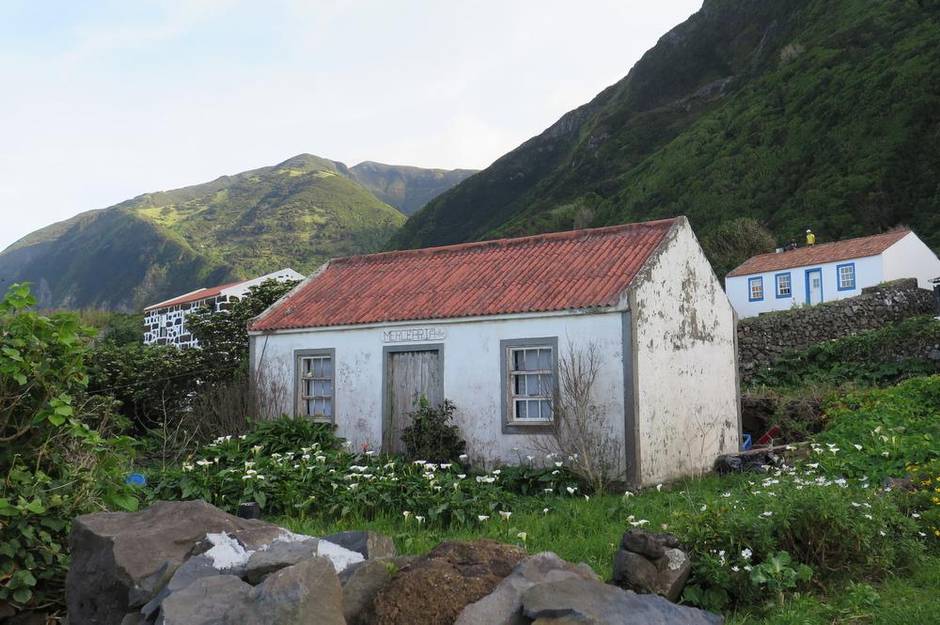 Some still eke out a living in this isolated community on the north shore of Sao Jorge. (Jim Byers)

She asks whether I want to turn back. But I am not that knackered, and I don’t want to miss our final destination, where a large pond with just the right mix of fresh and sea water is the perfect breeding ground for cockles, small clam-like creatures that are simmered in local white wine, olive oil and fresh onions, and taste divine slurped straight from the shell.

As we slide past spectacular views of the sea and gaze up at massive walls of rock and deep green forest rising over our heads, Alves points out some of the flora.

“This one’s good,” she says, pointing to a tiny, pale flower. “When I was a little girl, we’d suck on part of the flower when it’s ripe. It’s quite sweet.”

She pauses for effect.

“You just have to watch out for the ants.”

We march onward, up and down the hills and past a few bored-looking cows penned in by walls fashioned of the cheapest and most available material they can find in these parts; craggy, grey-black volcanic rocks. (If you stand on any of the Azorean islands’ many overlooks, you’ll see a patchwork quilt pattern of rocks that zag and zig over the verdant landscape. In other parts, they use thick layers of hydrangeas for hedges, giving parts of the islands a remarkable blue pattern during the blooming season.) 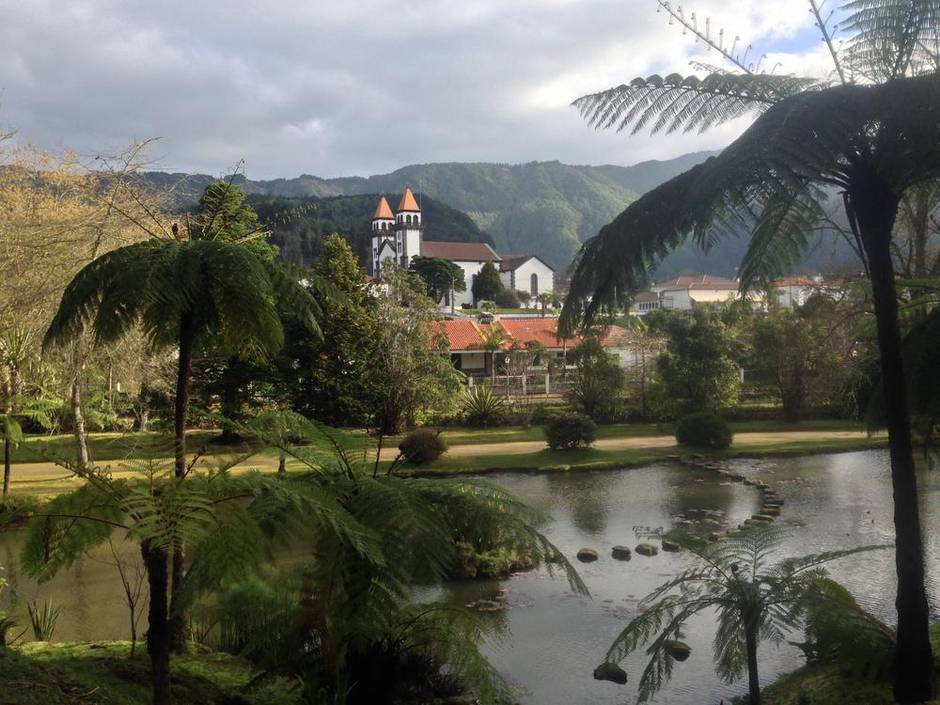 The town of Furnas on Sao Miguel. (Jim Byers)

We pause in Santo Cristo to take photos of the wild coastline and the scattered homes, then trudge back to the parking lot at Faja dos Cubres. Over dinner at a place that serves tender Azorean steak with the island’s famous, slightly nutty Sao Jorge cheese, Alves tells me a bit about her home. I ask about any rivalries among the nine main Azorean islands and she laughs.

“We like to make fun of Terceira because they have so many festivals and parties. We call the Azores eight islands and one amusement park.”

Later in the week, I have only three hours to explore Terceira. I don’t see any Tilt-A-Whirls, but I do tour the town of Angra do Heroismo, a UNESCO heritage site with boldly colourful buildings and an old fort on a hill protecting the harbour. I spend most of the next two-and-a-half days on Sao Miguel, a stunning island that features volcanic craters filled with fresh water and the only two tea plantations in Europe. The main city of Ponta Delgada has its charms – including some edgy art galleries – but I prefer the rocky, southern shore around Caloura, with its chalky brown cliffs, seaside restaurants and laid-back, Mediterranean feel.

My Sao Miguel guide, Edoardo Elias, has an encyclopedic knowledge of the islands – and a ton of relatives in the Toronto area (quite common in these parts, after a mass emigration from the islands in the 1950s and ’60s). He takes me to Sete Cidades (Seven Cities), where we climb 96 stairs of an abandoned hotel with soggy carpets and torn out walls to admire the view of Blue Lake and Green Lake, said to have been created from the tears of a princess and poor shepherd boy who were not allowed to marry. 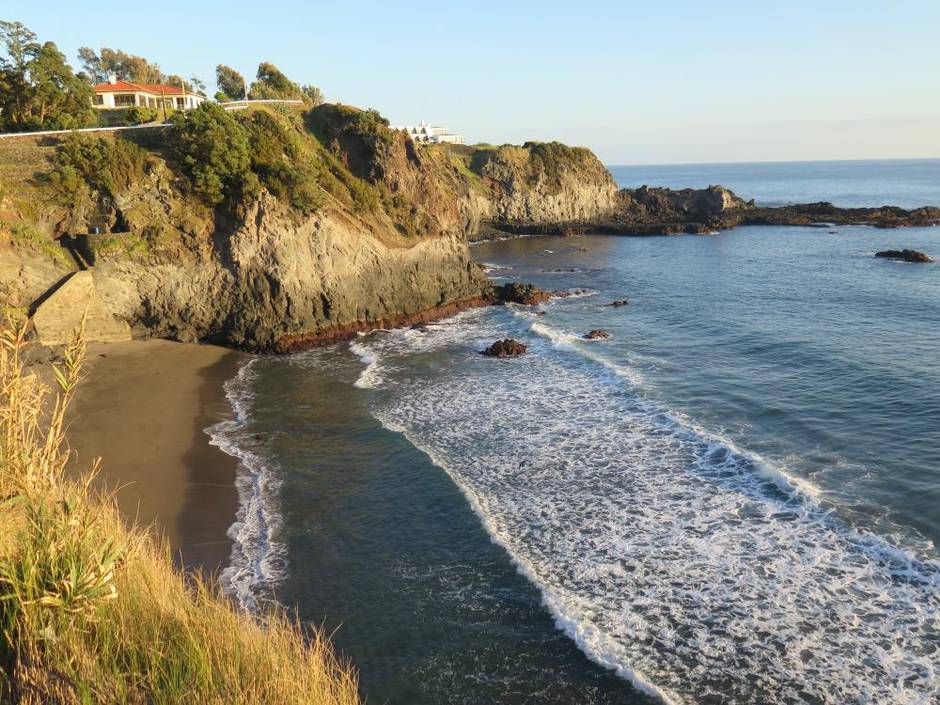 The south shore of Sao Miguel feels more like the Mediterranean or southern California. (Jim Byers)

The Azores are in an active volcano zone where three tectonic plates meet, which produces a lovely benefit for aching hikers: a multitude of bubbling natural springs in which to soak your aching muscles. I take a 20-minute soak in 37-degree waters in the jungle-like forests at Caldeira Velha and later enjoy the mineral bath at the lovely Terra Nostra Garden Hotel in the village of Furnas, built inside an inactive crater. The town is filled with taps that spill out warm-to-scalding water. One is said to be best for sore joints, another for hangovers.

“There’s one where folks swear you can pass any police sobriety test if you drink from it first,” Elias tells me, an eyebrow fully raised.

On my final full day in the Azores, I make time for one last dip in the rusty-brown, iron-rich waters of Terra Nostra’s outdoor mineral pool, then wander through the hotel garden, a thicket of deep, dappled green that feels like a cross between Britain and Southeast Asia. The climate here, surrounded by ocean waters that keep things cool in summer and not too cold in winter, allows residents to grow almost anything. In addition to pineapple and palm trees and those massive hedges of hydrangeas, you’ll find towering camellias, riotous rhododendrons and pink azaleas.

As I wander about Furnas, I spot thick waves of steam rising from cracks in the earth – swirling around those deep orange-red rooftops and rising up toward steep, impossibly green cliffs dotted with black and white cows under a pale blue sky.

I find myself wandering about in a half-daze, wondering how I didn’t really know what this place has to offer. 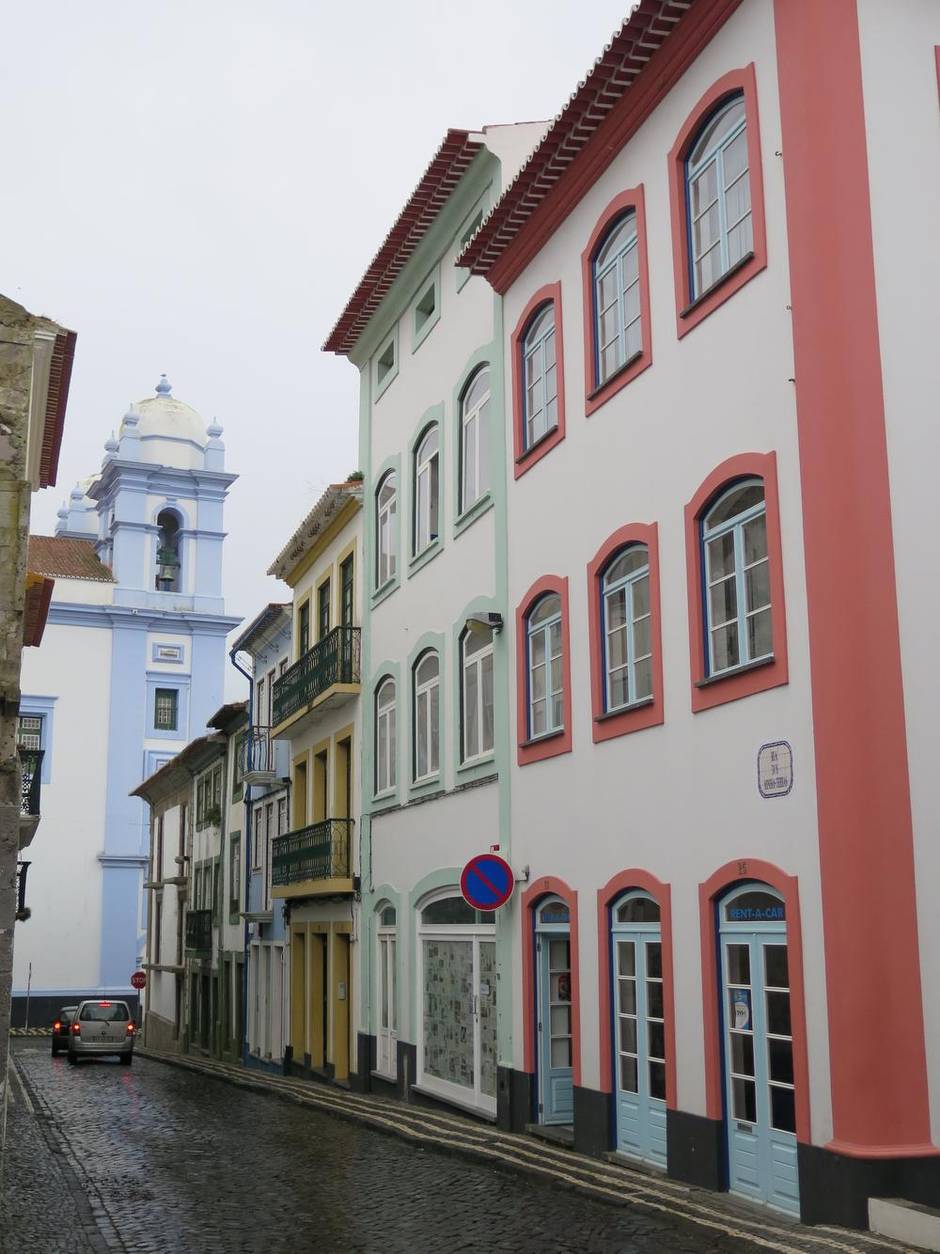 SATA flies directly to Ponta Delgada from Toronto; flight time is less than six hours. You can also fly from Lisbon, which is two hours away. sata.pt/en

The Terra Nostra Garden Hotel is a lovely, recently renovated property in Furnas. From €135 ($177); terranostrahotelazores.com

Hotel Colegio is a small hotel fashioned from an old school in the heart of Ponta Delgada. There is an excellent restaurant on site and a nice pool. From about €80; hoteldocolegio.com

On Sao Jorge, Casa da Ermida is a stunning farmhouse with exposed stone walls just 10 minutes from the main village. With a large area for kids to play out back, a huge upstairs living room and a kitchen, it’s great for families. From €70 (including breakfast); casadaermida.pt

The writer travelled as a guest of the Azores Tourism Association. It did not review or approve this article.